The Shelby Report recently received a letter from Jim Brown, who owns Maguire Store in Slaughterville, Okla., with his wife, Annette. The letter came in response to an “Ellerbee Buzz” column entitled “Grocery Stores Are Community Centers” that was published in our February Southwest edition.

The column was an attempt to list some of the many, many services available at grocery stores alongside the quality food and merchandise we have all come to take for granted. Among them: giving Girl Scouts a place to sell their cookies, offering vital supplies during and after weather calamities, and in the case of a Safeway store in Tucson, Ariz., where U.S. Rep. Gabrielle Giffords and 13 others were wounded and six people were killed, helping to heal a community.

But as Mr. Brown’s letter so aptly illustrates, the column didn’t even come close to showing just how much a local grocery store can mean to its community. His letter, which follows here, brought tears to the eyes of Shelby staff ­members. It no doubt will resonate with ­grocers across the Midwest.

[quote]“In 1969 I put down $1,000 and entered the store ­business in a rural area of Oklahoma. Coincidentally, at the time there was great interest in incorporating the surrounding area into a township and, being the only meeting place in the area, our ragged little store with no running water and an outhouse with a broken door became the focal point of the community.

“The town became a reality, and as time passed Annette and I built a new store. We held town meetings in the back room. Over the years we served as town clerk, councilman, mayor, firefighter and president of the planning commission. We became voter registrars and a voting poll.

“Neighbors got together and built the first fire truck before we had a station to house it, so the truck was parked at the store. I guess everyone knew it would be safe at the store. If there was a fire, you called the store. To outfit the truck, I bought the necessary equipment and displayed it on pegboard in the store with the price on each item so community-minded townsfolk could buy an item and place it on the truck. Today we have three big fire stations and the beginning of a beautiful business district.

“A few years later, a terrible grass fire swept through the community. Eleven homes were lost, but it gave birth to a ‘burn closet’ in a warehouse next to our store. If you lived in the neighborhood (and) lost your home to fire or other calamity and didn’t have insurance to cover the loss, you came to the store, we took you through the building and you moved into your new home with everything from major appliances and furniture to silverware and dish­towels, all of it used but quite serviceable. Today we ­extend those services to three counties, all of it free to those who need it.

“The local high school heard about our involvement and asked if we’d like to operate a food closet, too. Might as well, Annette said. Today the big pantry is stocked with groceries from drives held at local businesses and the ­library as well as the high school. We take care of just about anyone who comes to our door.­

“In about 1973, a room and board facility was ­established close by for mentally challenged adults. As the first Christmas neared, we asked if any of the 35 residents would be spending the holiday at the facility.

“So on Christmas Eve, Annette and I drove over with new clothing, fruit, candies, nuts and home-baked banana nut bread all wrapped up in paper and bows. We sang carols, read ‘The Visit from St. Nick,’ handed out the gifts, then drove back to our little apartment in the store, sat down to a cup of coffee and with tears in our eyes, agreed that we had just celebrated our first REAL Christmas.

“Time passed and our ‘Santa’s Helpers’ project grew steadily, adding one or two new homes each year, spreading across the state. This last Christmas, 18 teams of volunteers, most of them our store customers, headed out before sunup on Christmas Eve and before evening, they had delivered about 12,000 individually wrapped gifts to 1,850 disadvantaged folks in 51 homes all across Oklahoma.

“All of these projects have been funded year after year by our customers, basically a low-income community of carpenters, cement finishers and folks on Social Security. Oftentimes there are funds left over to start early on next year’s Christmas.

“Wherever they’re located, community-minded stores can have a tremendous effect on the quality of life in their communities. I’ve found that people love to give, they just need someone to lead them a little bit.” 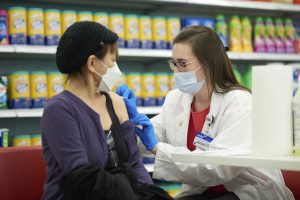