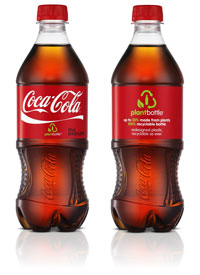 The Coca-Cola Co. has entered into multi-million dollar partnership agreements with three leading biotechnology companies to accelerate development of the first commercial solutions for next-generation PlantBottle packaging made 100 percent from plant-based materials.

This effort to commercialize a plastic bottle made entirely from plants builds on the company’s introduction and roll-out of its first generation PlantBottle package that was the first recyclable PET beverage bottle made partially from plants. Since introduced in 2009, the company has already distributed more than 10 billion PlantBottle packages in 20 countries worldwide.

Agreements with Virent, Gevo and Avantium—industry leaders in developing plant-based alternatives to materials traditionally made from fossil fuels and other non-renewable resources—were signed following an in-depth two-year analysis of different technologies by The Coca-Cola Co.’s R&D team and technical advisory board.

“While the technology to make bio-based materials in a lab has been available for years, we believe Virent, Gevo and Avantium are companies that possess technologies that have high potential for creating them on a global commercial scale within the next few years,” said Rick Frazier, VP of commercial product supply for The Coca-Cola Co. “This is a significant R&D investment in packaging innovation and is the next step toward our vision of creating all of our plastic packaging from responsibly sourced plant-based materials.”

The Coca-Cola Co.’s first generation PlantBottle packaging is the only fully recyclable PET bottle made with up to 30 percent plant-based material available today. PlantBottle packaging is made up of two components: MEG (mono-ethylene glycol), which makes up 30 percent of the PET, and is already made from plant materials; and PTA (purified terephthalic acid), which makes up the other 70 percent. In this next step, PTA will be replaced with plant-based materials, too.

PlantBottle packaging makes a difference by reducing our dependence on nonrenewable fossil fuels and minimizing the carbon impact of PET plastic. It is estimated the use of PlantBottle packaging in the first two years alone has helped save the equivalent annual emissions of more than 100,000 metric tons of carbon dioxide.