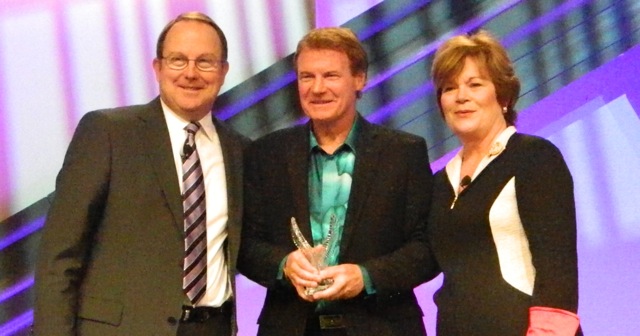 Steven C. “Steve” Smith, president and CEO of K-VA-T Food Stores Inc. in Abingdon, Va., received FMI’s highest recognition, the Sidney R. Rabb Award, for his exceptional service to the consumer, the community and the supermarket industry. Smith started in the grocery industry as a child, learning from his father Jack Smith, who opened his first Piggly Wiggly store in 1955. Throughout Smith’s 26 years of employment, his dedication and knowledge of store operations grew with the company, which now includes 93 Food City supermarkets throughout the tri-state regions of southeast Kentucky, southwest Virginia and northeast Tennessee, in addition to 11 new Super Dollar Discount Foods stores.

Before he became president and CEO at K-VA-T, Smith was district manager, director of meat operations, director of advertising, store operations divisional VP, EVP of store operations and COO. He also was the only executive to serve as chairman on both FMI’s and the National Grocers Association’s board of directors.

His dedication to the community parallels his commitment to the industry, according to FMI.

“Beyond corporate and social responsibility, Steve Smith represents the true meaning of community commitment,” Travis Staton, CEO of United Way of Russell and Washington counties said. “From buying from local farmers to giving back to area schools, Steve is improving lives within the communities he serves. Thanks to his hard work and dedication, many have been given the opportunity to have a better place to live, work and raise a family.”

One of Smith’s long-time associates, Israel Quinn, stated, “Steve Smith believes that as a good corporate citizen, we have a responsibility to leave our community a better place than we found it…Steve Smith’s commitment to our region is unsurpassed.”

FMI instituted the newest award in honor of Robert B. Wegman, whose half-century leadership of Wegmans Food Markets was marked by a creative retail savvy that grew their family grocery business into one of the largest privately‐held companies in the United States.

Since joining the company in 1964 as a store manager, Danny Wegman helped mold the organization into one of the top-ranking companies to work for, recognized by Fortune magazine for the past 15 years and placed at No. 1 the first year Wegman became CEO in 2005. Under Wegman’s leadership, the nearly 100-year-old privately owned brand has become a $6.2 billion family-friendly franchise.

Danny Wegman was recently quoted in the press saying, “Leading with your heart can make a successful business. That’s how free enterprise works.”

In that same spirit, the Robert B. Wegman Award for Entrepreneurial Excellence will annually celebrate the food retailer or wholesaler responsible for creating exceptional retail innovations.

“Danny is the humblest person I know,” said Wegmans’ SVP of store operations, Jack DePeters. “His drive for high standards, and leading with his heart, inspires our people to give incredible service to our customers and each other.”

DePeters continued, “Danny models our slogan of ‘Every day you get our best.’ He has the innate ability to see new things and relate them back to our business so that we can follow our customer from two steps ahead.”

Danny Wegman’s achievements also include winning FMI’s Sidney R. Rabb Award in 2003, which his father, Robert B. Wegman, won in 1981; they are the only father and son to be given this award.

Richard Parkinson, former president and CEO of Associated Food Stores Inc. in Salt Lake City, was honored with the FMI Herbert Hoover Award for his humanitarian service in the food retail and wholesale industry.

Associated Food Stores is best known for its camaraderie of independent operators across the United States. Parkinson is a prime example of this development from his start in 1984 as the director of store development and retail finance, moving to VP and EVP before being named president and CEO in 1994. Parkinson retired at the end of 2011.

Parkinson’s mantra to his success includes a critical component: People. His commitment to fostering growth was not only with the customers in the stores, but also with the associates who run them. Parkinson worked toward building company unity across all the Associated Food Stores.

“Rich is a dedicated, open-minded and well-respected influencer who often shaped strategy in retailer share groups at FMI,” said FMI President and CEO Leslie G. Sarasin. “Rich uses his voice selectively, but when he does, it reverberates throughout the industry.”

In concert with this commitment to his associates, Parkinson made a point to visit all of the 600 independently owned stores on his motorcycle. This tour throughout the U.S. was a way to foster employee relationships and learn about operations, keeping a close bond between wholesaler and retailer.

Parkinson’s dedication is evident through his accomplishments to the retail food industry, including the impressive growth in the purchase of 23 corporately owned stores. In addition to growing the brand, Parkinson’s tenure involved the completion of one of the West’s largest, most efficient warehouse facilities in its 1-million-s.f. Farr West distribution center.

Despite this expansion, Parkinson always stressed the importance of localization and focusing on the communities in which his stores serve. Parkinson’s passion for all of Associated Food Stores’ branches is still felt throughout the employees as they work to continue his legacy, according to FMI.