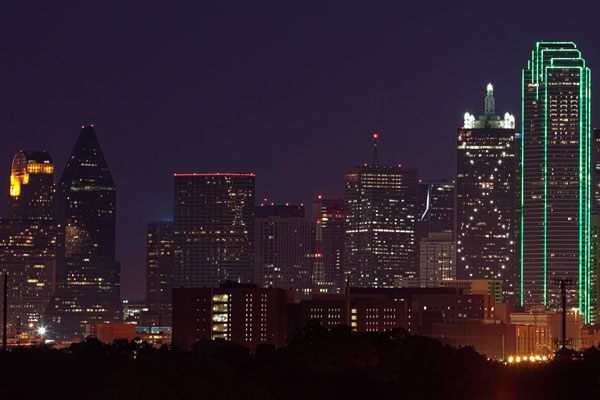 Terrie Ellerbee TerrieShelbyPub
[gn_note color=”#ff3333″] The 2012 North Texas originally ran in the March 2012 edition of The Shelby Report of the Southwest. The profile will be published on theshelbyreport.com one month after it has run in print.[/gn_note]

According to the International Council of Shopping Centers, even Texas, which has bucked one recessionary trend after another, hasn’t seen as much retail commercial activity as it did in 2008 and earlier.

That means grocery store development, and, in the hotly competitive North Texas market, the construction of new food distribution centers. H-E-B is adding 300,000 s.f. to a facility that supplies 50 stores from Austin to Dallas, and Target Corp. has a new distribution center going up in Denton.

H-E-B’s Central Market concept doesn’t exactly bring “necessity” to mind when it comes to real estate development, but its gourmet, natural and organic offerings have strong appeal and warrant the banner’s expansion.

But the stores need to fit into urban markets. The Fort Worth Star-Telegram reports that executives with the privately held chain visited urban markets in New York to gather ideas about smaller stores. The result is a 30,000-s.f. store at Preston Road and Loyal Lane in Dallas near Southern Methodist University scheduled to open Feb. 15 (after press time). The new Central Market location is less than half the size of a typical store.

The site is a former Borders store, a selection Stephen Butt, SVP of Central Market, said was “bittersweet” because it had been his family’s bookstore for a decade.

“We’re disappointed to lose it, but, at the same time, we’re excited to bring a cool new food destination to this part of Dallas,” Butt said in a press release.

As for other new sites, Butt told the Star-Telegram that if the right ones became available, more Metroplex locations are possible. The paper and Butt described the primary market as within Loop 820 in Tarrant County and I-635 in Dallas County.

The original 2001 store in Fort Worth at Hulen Street and I-30 has been undergoing a remodeling project that expanded its café, added a new produce cooler and a new chef’s case in the deli for prepared foods. Mozzarella, pasta and bagels will be made fresh in view of customers, and the store also has a new salad bar, goat cheese station and an expanded bakery case.

“This store is specifically tailored to meet the needs of the Granbury community,” said Jeff Thomas, SVP and GM for the H-E-B central Texas region. “Located less than 35 miles from our store in Burleson, the city of Granbury is a natural progression for the growth of our H-E-B stores in North Texas.”

The Granbury store also features a drive-thru pharmacy, a fuel station and more than 1,700 wine varieties, as well as a Cooking Connection demonstration kitchen.

H-E-B also is completing work on a new $20 million cold-storage ­facility in Temple. The frozen food distribution center will supply 50

H-E-B stores from Austin to Dallas. Work should be complete by June.

Located at the northwest corner of Farm-to-Market Road 423 and Farm-to-Market Road 720, the Little Elm Marketplace offers customers a variety of products, including home goods, furniture and jewelry. It is twice the size of a typical market store, sitting at 123,000 s.f. The store features skylights and energy-efficient LED lights as well as concrete flooring that requires less energy and fewer chemicals to maintain.

Offerings include organic and natural items, chef-prepared food such as fresh-made sushi and desserts, toys and more. In the deli, the Murray’s Cheese Shop features 200 imported and ­specialty cheeses. Boar’s Head meats and cheeses also are offered at the deli.

A Starbucks is located inside the store with seating available inside and outside on a covered patio. On the other side of the store, a Fred Meyer Jeweler sits near the entrance.

Separate freezers and refrigerators provide customers with a one-stop shop for their organic products.

In the pet department, Kroger sells both frozen and refrigerated treats with the pet food and toys. In the fruit and vegetables section, a fresh orange juice squeezer is available as well as a pineapple corer. The store also focuses on selling locally grown fruits and vegetables.

Ashley Furniture is sold within the store, providing delivery options if needed. The wine ­department has nearly 600 varieties of wine and beer as well.

The in-store, full-service pharmacy has a drive-thru offering not only generic prescriptions, but also immunizations in a private consultation room.

In addition, nine of the division’s 17 minor remodeling projects were in North Texas, and three of seven new locations of the grocer’s popular fuel centers opened in the market as well.

“Our fuel reward program has saved our customers thousands of dollars on their fuel purchases,” Breetz said. Four more fuel centers will be added in 2012, and others will be expanded.

Breetz also said that Kroger will use all available tools to improve on customer service.

“Kroger will continue to lead in technology with digital coupons and a mobile phone app,” Breetz said. “New technology will also help Kroger provide the fastest checkout experience in the market.”

The company has been focusing on local offerings, which helps area producers.

“We are committed to providing fresh Texas produce for customers and supporting local ranchers and manufacturers,” Breetz said. Kroger operates two manufacturing plants in North Texas: a dairy and a beverage plant.

For instance, Kroger is the exclusive retailer for Nolan Ryan Beef, and it recently expanded the variety of items available to its shoppers.

Kroger also has added all natural selections of Boar’s Head meat in the deli case, and added Murray’s Cheese Shops in Dallas-Fort Worth area stores as well, and Breetz said customers gave the company “high marks” for that.

The chain also plans to continue to help those who are struggling financially and those working to overcome hunger.

“The economic conditions continue to put pressure on the customer’s budget. Kroger is ­committed to providing low prices for customers every day,” Breetz said.

In addition, Kroger, along with other food retailers—Albertsons, Market Street and Tom Thumb—held the largest food drive ever to benefit both the North Texas Food Bank and Tarrant Area Food Bank, Breetz said. (See photos from a recent luncheon at the new location of the North Texas Food Bank on page 40.) While results were not available as of press time, the goal of Souper Bowl of Caring, which ran though Super Bowl Sunday Feb. 5, was to raise more than 1.2 million pounds for the food bank. More than 200 stores sold prepared bags of food and asked customers to donate $1 at checkout. It also helped spread awareness of the issue, Breetz said.

Breetz is proud that Kroger was ranked by Forbes magazine as the “most generous company in America.”

Meanwhile, the Fort Worth Star-Telegram reports that Kroger’s 56,000-s.f. store at 1050 Bridgewood Dr. will close Feb. 18 (after press time). The store had been in that location for 16 years.

As that announcement was made, Gary Huddleston, director of public affairs for Kroger, pointed out to the newspaper that a new Signature format store would open on Alta Vista in the Shops of Timberland Crossing in late June.

Brookshire Grocery Co. recently hosted two re-openings at stores in Willow Park and Granbury. The Willow Park Store now has a new look inside and out, a new drive-thru pharmacy window and new deli selections, among other additions. It held numerous demos and tastings, including Samuel Adams beer/wine tastings, throughout December in recognition of the re-opening.

The Granbury store also has a new look, a full-service meat and seafood, fresh sushi, and Wi-Fi throughout the store. It hosted demos and tastings during December and January.

In December, Brookshire’s plans for a new $10 million store to Pottsboro along Highway 289 north of FM-120 were reported by several media outlets, including KXII, a CBS affiliate in North Texas.

has leased a 45,000-s.f. building at 9500 North Central Expressway in the Dallas area, reports the Dallas

It is the retailer’s first Dallas-area store. The store will sell more than 10,000 specialty food items, spirits and wine. It is a former Toys R Us store, and is the largest store in the chain’s 90-plus roster. Its stores are located primarily in Houston, Austin and Corpus Christi.

Spec’s plans two other Dallas-Fort Worth sites. The Dallas Business Journal reported on Nov. 2 that a Plano location is a possibility. Spec’s Family Partners Ltd. applied for a sales tax permit for “Spec’s Wine & Beer No. 151” at 5930 W. Park Blvd. in Plano at Gleneagles shopping center.

Spec’s announced last summer that it would open three stores in the Dallas-Fort Worth market.

Trader Joe’s is opening its first Texas stores. The first is a 15,000-s.f. store at 2701 S. Hulen St. in Fort Worth that is expected to open this spring at about the same time a larger Trader Joe’s will open in The Woodlands, a Houston suburb.

Other Trader Joe’s stores in North Texas will be located in a former Kroger store in the Preston Towne Crossing Shopping Center in Plano at Preston Road and Park Boulevard, and at 2001 Greenville Ave. in Dallas.

Target, Walmart busy in market, too

Minneapolis-based Target Corp. will open a new 360,000-s.f. food distribution center at 3952 Corbin Rd. in Denton in March 2013. It will replace a center Target leases in Fort Worth and employ 140 people. The new center will feature an automated food distribution system and have twice the capacity of the former center. Among its features: 20 banana-ripening rooms.

Target was a Supervalu customer, but reached a breaking point in volume and took direct control of its grocery supply, Carson Lansgard, the chain’s ­distribution group director, told The Dallas Morning News. Lansgard added that the new center would allow for more conversions to Target’s grocery ­concept.

Dallas was among the first markets for SuperTarget stores and for introducing the “PFresh” concept to existing stores, The News reports.

Bentonville, Ark.-based Walmart most recently opened a 136,000-s.f Walmart store with a full line of groceries on Jan. 18 in the Midpark area of Dallas at 13739 N. Central Expressway.

The store also has a bakery, deli and pharmacy, and its offerings also include meal solutions, lawn and garden products and an expanded selection of electronics.

On the same day, a new Flower Mound store also opened. The 55,000-s.f. Walmart Neighborhood Market store carries a full line of groceries, a deli with rotisserie chicken, a bakery featuring fresh bread and a variety of prepared foods.

A new Neighborhood Market store will open in spring 2013 or before in a former Kroger store in Colleyville. The 56,000-s.f. store will be Walmart’s first Colleyville location.

Fort Worth will get a new Neighborhood Market store as well, at Beery and Hemphill streets. It will be the first in the center of the city, the Fort Worth Star-Telegram reports.