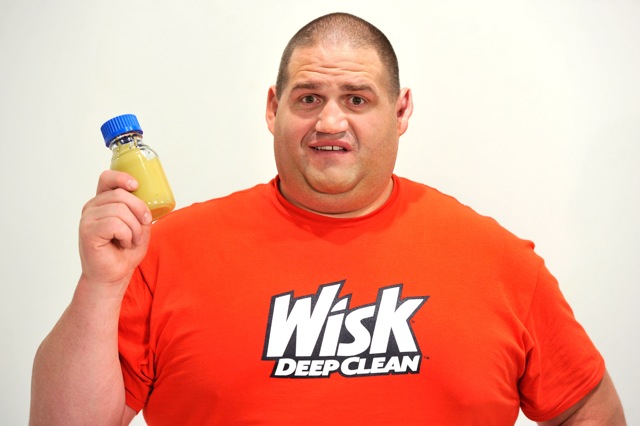 U.S. gold and bronze medal Greco-Roman wrestler and NBC television analyst Rulon Gardner knows all about sweaty laundry. At 300 pounds, he loses six to 10 pounds of sweat during each workout and, throughout his lifetime, has endured excessive loads of “tough-to-clean” laundry. As he continues his training to compete at a world-class level, Gardner has been named Wisk Deep Clean’s first “Sweat Ambassador,” a role that will allow him to share his wisdom and philosophy of years both on and off the wrestling mat, from winning a match to removing body oils and sweat from his clothes.

Gardner’s mother, Virginia, raised her son to be the world champion that he is, but his success brought her years of never-ending, sweaty laundry. A mother to nine kids on a working dairy farm, Virginia has been a Wisk user for many years, and both she and her son know how important it is to get clothes deep down clean.

“We are pleased to appoint Rulon our first official Sweat Ambassador. His desire and drive for top performance on and off the mat make him a perfect fit for Wisk Deep Clean,” says Lora Van Velsor, director of marketing at Wisk. “We are also proud to be the brand of choice for many years for his mother, Virginia, who raised Rulon and his eight brothers and sisters on a farm and has done endless loads of laundry.”

The ring isn’t just around the collar anymore, it’s throughout your clothes—everywhere from casual jeans to workout clothes. In fact, the average washload contains 20 times more body oils and sweat than visible stains. Wisk Deep Clean goes beyond surface stains, penetrating deep inside fabric to attack and help remove trapped body oils and sweat that some other detergents can leave behind, according to a company news release.

“Growing up on a dairy farm I learned to work hard and, whether it’s the sweat and dirt from hauling hay and milking cows or from drenched workout clothes, using a detergent that gets it all out is important to me,” says Gardner. “That’s why Wisk is my No. 1 choice.”

Gardner’s victory in 2000 over the undefeated three-time gold medalist and nine-time world champion, Alexander Karelin of Russia, is known around the world as “The Miracle on the Mat.” And his career and contribution to health and sport are continuing. Earlier this year, Gardner, 40, attempted a comeback to compete for the U.S. in London this summer. Although he missed making the U.S. squad, he continued to help his fellow teammates prepare for London by training with them in Colorado Springs throughout the spring and summer and up until they left for London last week. Gardner will be commentating the wrestling matches in London as an NBC sports analyst, beginning Saturday, Aug. 4, on NBC.