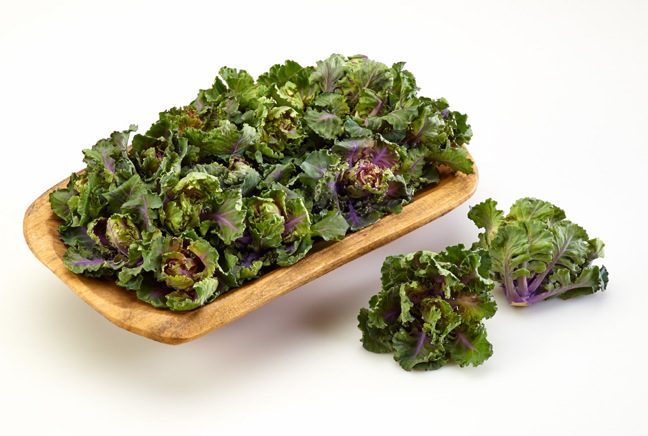 The first new vegetable in more than a decade—Kalettes—will be arriving at grocer stores this fall. The green and purple offspring of brussels sprout and kale, Kalettes’ flavor can be described as a fresh fusion of sweet and nutty, combining the best traits of each of its parent vegetables, according to Tozer Seeds,  the largest family-owned vegetable breeding company in England that developed the kale-brussels sprout hybrid after more than a decade of research.

Tozer says its product development staff worked with a variety of different colored sprouts and kale before finding the winning combination. Kalettes are not genetically modified and were developed by cross-pollinating brussels sprouts with kale through traditional methods. So far, the U.K. and the Netherlands have been introduced to the new food.

Tozer is working with several co-operators to grow and market Kalettes.

“We started selling seed in the U.S. in 2012 and quickly realized that this new vegetable was going to be a huge hit with consumers due to the popularity of both vegetables,” said Kraig Kuykendall, sales manager of Tozer Seeds U.S. “The idea behind gathering co-operators to market under the Kalettes brand was to give consumers a consistent name and brand identity to look for in the produce department.”

Plans for the U.S. launch include consumer media engagement and a strong presence on social media channels.