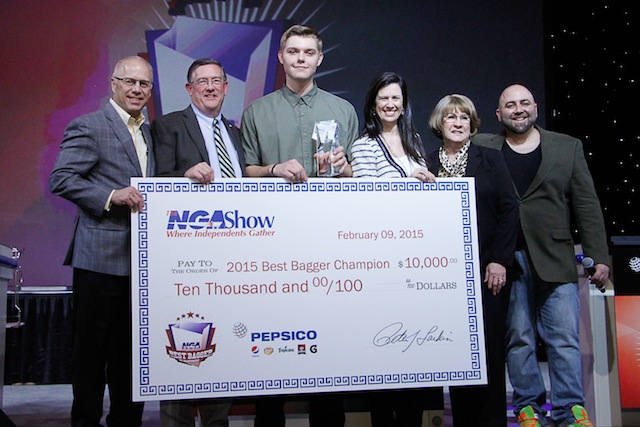 Defeating 24 other competitors from across North America, David Tochinskiy of Rosauers Supermarket in Spokane, Washington, has claimed the title of the National Grocers Association (NGA) best bagger champion.

Sponsored by PepsiCo, the competition was emceed this year by Food Network star Duff Goldman and held during the NGA Show, which wraps up Feb. 11 in Las Vegas. Contestants are judged on speed of bagging, proper bag-building technique, weight distribution in the bag, style, attitude and appearance.

In addition to taking home “bagging rights” for the year, Tochinskiy was awarded the $10,000 grand prize and a “Golden Grocery Bag” trophy.

Lucas Mealer of Kroger in Jackson, Tennessee, was awarded the second place prize of $5,000, and the third place prize of $1,000 went to Zach Anderson of Lunds in Bloomington, Minnesota. Fourth and fifth place winners, winning $1,000 each, were Mai Her of Skogen’s Festival Foods in Sheboygan, Wisconsin, and Francis Cavattone III of Big Y Foods in Springfield, Massachusetts, respectively.

“This competition brings attention to a very important aspect of a consumer’s shopping experience, as it is the bagger who serves as the last touch to the shopper. The proper bagging of groceries is key to providing quality customer service,” said NGA President and CEO Peter Larkin. “A big congratulations to David Tochinskiy for showcasing…exceptional bagging techniques and ultimately taking home the title of best bagger champion.”

Now in its 29th year, the annual NGA Best Bagger Championship is the culminating event of a year-long nationwide contest, in which one contestant from each participating state who has won the statewide competition is eligible to compete in the national contest. This year, 25 of the top grocery baggers competed for the national best bagger title.

The Best of Show in Marketing was awarded to County Market of Quincy, Illinois. County Market partnered with Mondelez to offer a contest to give away tickets to see the world-famous boy band One Direction. The event highlighted Oreos as the featured product. Customers could get an entry into the sweepstakes when they bought two Oreo packages and scanned their Max Card (loyalty card) in one purchase from July 2-15, 2014. The contest was promoted in the circular ads, emails, social media, text messages, print and digital signage in the stores; all available channels were used to advertise. Four winners each received two tickets to the One Direction concert in St. Louis on Aug. 27, 2014.

The Best of Show in Merchandising was awarded to Coborn’s of St. Cloud, Minnesota. Coborn’s designed a large-scale food drive that took place during the month of October in all stores. This was in support of the Minnesota Grocers Association’s annual event to raise food and money for local food pantries.

Nearly 300 entries were judged based on the criteria of creativity, clarity and effectiveness by a panel of industry experts. Creative Choice Award winners for each category were selected as Best of Show nominees. Best of Show winners were determined by both the judges, and through online voting, and involved more than 600 votes.

The annual Creative Choice Awards contest, sponsored this year by Kellogg’s and Unilever, honors the best marketing and merchandising programs in the independent supermarket industry. Marketing campaigns and merchandising events or promotions held between Dec. 1, 2013, and Dec. 1, 2014, were eligible for this year’s contest.