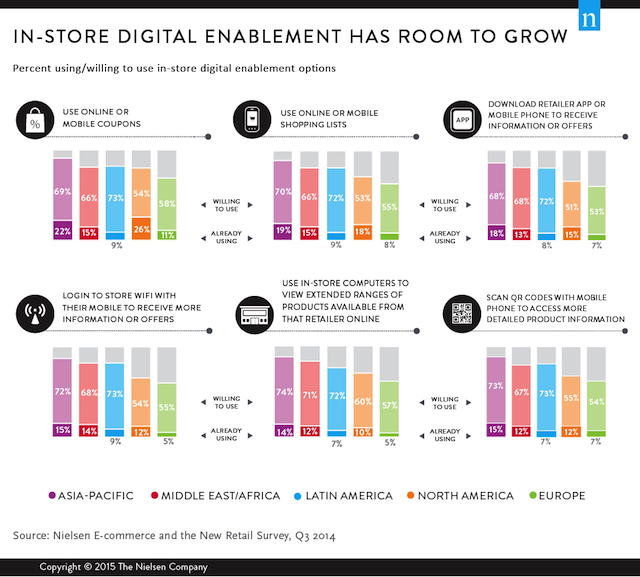 If device-driven consumers turning to online shopping options give brick-and-mortar retailers cause for concern, they would do well to remember that e-commerce is only one part of the digital picture.

That’s according to a new report from Nielsen, which says a complete digital strategy includes interaction at every point along the path to purchase, including finding stores, making lists, checking prices, researching products, sharing content and purchasing. These touch points occur both in and out of stores, and consumers are increasingly using technology to simplify and improve the process.

In-store digital enablement options can bring the ease, convenience and personalization of online into brick-and-mortar stores. Incorporating digital strategies into the in-store experience is not just a nice-to-have, these options can increase time in store, engagement levels, basket size and shopper satisfaction.

“At present, shoppers do all of the work putting the pieces together to arrive at their final purchase decision,” said Patrick Dodd, president, global retailer vertical, Nielsen. “In a competitive retail environment, retailers and manufacturers can add value and differentiation by providing digital tools to help consumers take control of their shopping experience while also increasing sales potential. Mobile in particular can tip the scales in favor of increased shopper control, empowering them to shape the shopping experience more than ever before.”

Retailers have a lot of room to grow when it comes to in-store Wi-Fi availability and digital enablement options, such as mobile coupons, lists and shopping apps. Today, only a small percentage of consumers around the world are already using such features, but willingness to use them in the future is high.

Online or mobile coupons (18 percent) and mobile shopping lists (15 percent) are the most cited forms of in-store digital engagement in use today among global respondents, with about two-thirds willing to use them in the future (65 percent and 64 percent, respectively). Downloading a retailer/loyalty program app on a mobile phone to receive information or offers is used by 14 percent of global respondents, and 63 percent say they’re willing to use one when it is available. About one-in-10 global respondents say they log in to store Wi-Fi to receive information or offers (12 percent), use in-store computers to view extended product ranges (11 percent) or scan QR codes to access more information (11 percent). Roughly two-thirds, however, are willing to use these options in the future (66 percent, 68 percent and 65 percent), respectively.

Among the online respondents in Nielsen’s survey, those in Asia-Pacific are most likely to use many of these in-store digital enablement options. This region also exceeds the global average for willingness to use in-store options when they become available. Current usage is low in Latin America, but enthusiasm for them is high. More than seven in 10 Latin American respondents say they’re willing to use in-store digital enablement options in the future. Mobile coupon usage is highest in North America (26 percent). European respondents are least likely to say they’ll use in-store digital engagement, but more than half (average 55 percent) say they are willing to try the options in the future. Another way to improve the in-store experience is to put more control in the hands of your customers—literally.

Today, 22 percent of global respondents say they use self-checkout, and nearly two-thirds (65 percent) are willing to do so in the future. Current usage is particularly high in the countries where self-checkout has been available for several years. For example, the technology was first introduced in the U.S. in 1992. Not coincidentally, North America also has the highest percentage of respondents who say they’re using self-checkout today (41 percent, nearly double the global average).

Using a hand-held store scanner to purchase products while shopping to avoid checkout lines is used today by only 12 percent of global respondents, but 70 percent are willing to give it a try when it is available—the highest percentage of the 14 flexible retail options included in the survey.

“Time-starved consumers want to use technology to make shopping faster, easier and more efficient,” said Dodd. “As we’ve seen with self-checkout, one of the more mature flexible retailing options included in the survey, adoption rates for these enablement tools will likely increase as more retailers incorporate these options in their in-store and online offerings.”