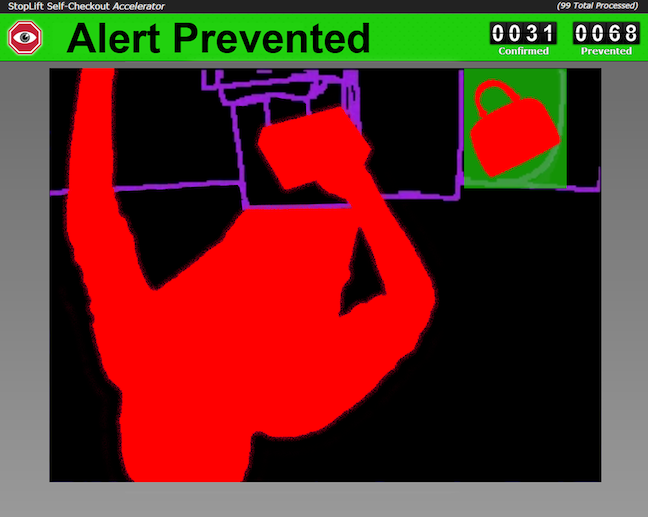 Those incidents include “sweethearting,” which is when cashiers pretend to scan merchandise but deliberately bypass the scanner without charging the customer for the merchandise. The customer is often a friend, family member or fellow employee working in tandem with the cashier.

The National Retail Federation has reported that about $14 billion of the $44.5 billion in retail shrink in 2012 was due to sweethearting. Supermarkets, with lower profit margins, are particularly vulnerable to sweethearting, which has accounted for an almost 35 percent profit loss industry-wide.

StopLift’s technology also has confirmed scan avoidance incidences by customers using self-checkout. Retail chains now can get real-time reporting on self-checkout theft and other scan avoidance, prevent false alerts and interventions, alert the attendant before the shopper leaves the store and improve customer service at the self-checkout with StopLift’s new Self-Checkout Accelerator.

“Retailers always suspected that self-checkouts would be highly prone to scan-avoidance, and our technology has certainly found this to be the case,” said Malay Kundu, founder and CEO of Cambridge, Massachusetts-based StopLift. “Our technology has found that shoplifting is as much as five times more likely to happen in the self-checkout lane.

“Using the incidents detected from their own stores, retailers are now able to train staff on the signals indicating when customers are either having problems using the self-checkout or are exhibiting suspicious behavior,” Kundu said.

StopLift’s patented Scan-It-All video analytics technology visually determines what occurs during each transaction to immediately distinguish between legitimate and fraudulent behavior at checkout. Kundu said the technology eliminates time-consuming human review of video, reduces and deters fraud at the checkout and improves profitability.

StopLift constantly monitors all security video and when a scan avoidance incident occurs, flags the transaction as suspicious. StopLift then quickly reports the incident, identifying the cashier or customer and the date and time of the theft. It also flags incidents that may be due to cashier mistakes or customer errors at self-checkout as well as items left in the shopping cart.

Dishonest associates are identified on the basis of video evidence the first time they conduct a fraudulent transaction rather than months or even years down the road, according to StopLift.

StopLift does not use a one-size-fits-all approach, but instead develops targeted applications to address the specific needs of retailers from different sectors, including general merchandise, grocery and specialty retail. In addition, Scan-It-All works with existing off-the-shelf overhead cameras. No special camera equipment needs to be purchased or installed, and no changes have to be made to the checkout.