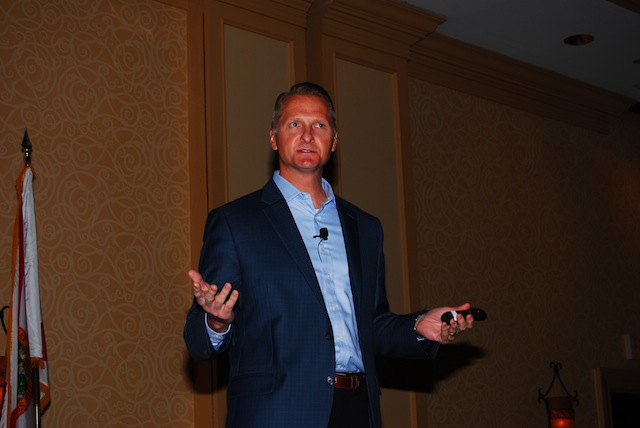 Ace Hardware and the grocery business are enjoying a growing and profitable relationship these days, as more and more independents are teaming up with Ace as a point of differentiation. There currently are about 150 Ace Hardware locations open in conjunction with independent grocery stores, either alongside or as a store-within-the-store.

“The consumer proposition is clearly being delineated between being box power retail…and this small, local, high-service, high-touch kind of business,” John Venhuizen, president and CEO of Ace Hardware, told attendees of ROFDA’s recent 2015 Spring Conference. “In our world, (the box power retailers are) The Home Depot and Lowe’s…and we’re trying mightily to be the high-touch, high-service, locally-owned and -operated neighborhood store that’s far more convenient.

“In your world, it’s Kroger and Safeway and Walmart, and then Trader Joe’s, maybe, or something like that, over on the other end. And what’s happening…is the folks that are getting caught in the middle are dying in almost every industry,” he added.

According to Venhuizen, adding a differentiating factor like an Ace provides for a “bifurcated, kind of a convenience side strategy in a world where you’re either big, local and small, or you’re struggling.”

Compared to the likes of The Home Depot or Lowe’s, Ace is a small player in the hardware business. However, in the grand scheme of business, Ace is one of the big guys. Venhuizen knows this.

He reveals that the Oak Brook, Illinois-based company celebrated its 90th anniversary last year and has more than 4,800 stores around the world—in all 50 states as well as 63 countries. It employs about 100,000 people and does billions in annual sales.

Though the company is large, Venhuizen says the goal is to function like a smaller company, because “small business owners…understand the fragility of business. They understand what it’s like to lose sleep at night wondering if you’re going to make payroll in the morning and the implications that will have in the morning, which tends to drive them to a sense of urgency and passion and activity that many don’t understand, maybe, as leaders of a larger business.

“Small business owners have a way of thinking because they own the place, and if more of us acted like we owned the place—imagine how we’d act.”

Big business also tends to lead to bureaucracy, which “suffocates people” with rules and regulations, according to Venhuizen. Small business, on the other hand, leads to informality, and informality liberates people.

“We even try to embed that into our consumer marketing; we constantly are underscoring that we are small, we’re local, we’re convenient and we’re just like talking to a neighbor.

“Thinking like a small business owner, no matter how big your business, is a winning strategy,” he added.

Part of that is having a servant’s heart, and Ace associates are told to never lose sight of who they are serving.

“In business, particularly the bigger and more successful we get, we tend to lose sight of who we’re serving, and it becomes very much about us,” said Venhuizen, referencing an associate who after work, years ago on a November evening, delivered a Christmas tree to an elderly woman’s apartment and assembled it. The woman provided the man with tea and cookies and, for the next seven years, he made assembling her Christmas tree over tea and cookies his late November tradition. When the woman died, the Ace associate was one of the few people at her funeral.

“A servant heart…is not the enemy of a profitable business but rather the enabler of it, and you can’t fake that for very long,” Venhuizen said. “Again, we try to preach that to our folks so they understand what drives a successful business. Operating with a servant heart and small business mindset can be a very, very successful and lucrative strategy.”

Acosta: Shoppers Have Mixed Views On When Life Will Return To ‘Normal’