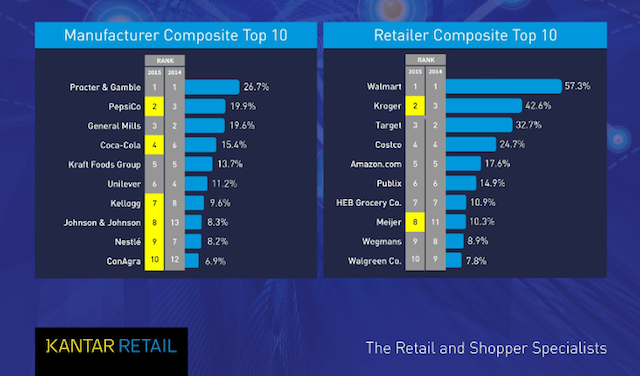 Kantar Retail has released the results of the 2015 PoweRanking survey, which finds that longtime industry leaders Procter & Gamble (P&G) and Walmart maintain their No. 1 leadership positions for more than a decade. This year, these juggernauts have two new competitors on their heels. The annual benchmarking study reports that Kroger and PepsiCo each obtained second-place rankings overall in their respective industries for the first time in the 19-year history of the PoweRanking, based on how trading partners evaluated their performance across key areas of their commercial relationships.

P&G was especially recognized by its retail trading partners for its strong brands and its capabilities in aligning strategies in a shifting retail landscape. As one major retailer noted: P&G is best due to the speed at which they respond to our new strategies. It’s a very intentional move on their part—to quickly understand changes in strategy, thinking in that language and moving to act on it.

PepsiCo was recognized most for its innovative marketing approaches, outranking all other manufacturers. A retail survey respondent expounded on PepsiCo’s marketing prowess: From the innovation and digital asset side, PepsiCo is a leader there. They do a really good job of working with us to leverage our assets together. They bring a spin on their own creative marketing campaigns and then how to best leverage through our digital mediums and some other outlets as well.

General Mills was virtually tied with No. 2-ranked PepsiCo, with high praise for its strong customer teams. In fact, General Mills achieved the No. 1 position for Best Sales Force/Customer Teams for the third year in a row: General Mills maintains a customer-focused team providing us with excellent analysis, marketing and category management support.

On the retailer side, more than half of manufacturer survey respondents continued to cite Walmart as the overall best-in-class retailer due to its massive scale, sustained strength in logistics and operations, and recent investments in digital and e-commerce capabilities that will help it ensure consistent growth and profit over the long term.

Kroger, with its first-ever No. 2 ranking, was lauded by manufacturers for continued innovation and optimization of the data-driven tactics driving effective execution of its shopper-focused strategy: Kroger’s Customer 1st strategy has been consistent for years, is inculcated throughout the organization and is delivering results.

Target came in at an overall No. 3 rank, but maintained its No. 1 position in “Best Store Branding” and “Most Innovative Merchandising Approach.”

The Target brand is incredibly strong. The art and messaging is consistent across the many touch points it has with its loyal “guest.”

This year’s PoweRanking report conveys a consensus across the consumer goods industries that a combination of rapid change, rising complexity and renewed competition made 2015 a particularly “growth-challenged” year. Some expressed worries that the short-term focus many organizations have placed on “cutting their way to the bottom line” may negate major investments that are needed to “deliver the topline growth required to sustain the industry.”

“While 2015 may have been a challenging year, and we are likely at the beginning of a long period of evolution, in many ways there has never been a more exciting time to work in the industry. It may require some ‘pivots,’ but those who place the right bets will continue to play an important role in the lives of consumers and shoppers for many years to come,” said Dan Raynak, EVP of strategy and development at Kantar Retail.

Both retailers and manufacturers expect this fundamental trend of increasing change, complexity and competition to continue in full force for at least the next several years, which means winning organizations will increasingly be those that can both anticipate important shifts in the business and quickly pivot their resources and capabilities to capitalize on them.

That fundamental capacity to identify and align with trading partners on the critical “pivot points” that can drive mutual growth is what PoweRanking participants emphasized as the biggest single lesson for the industry to consider as they wrap up 2015 and begin planning and preparations for 2016.

The purpose of the annual PoweRanking study by Kantar Retail is to identify those manufacturers and retailers who are best in class and to provide insight into what distinguishes them across areas of the manufacturer-retailer trading relationship.  The 2015 PoweRanking study included responses from more than 600 retailer and manufacturer respondents. 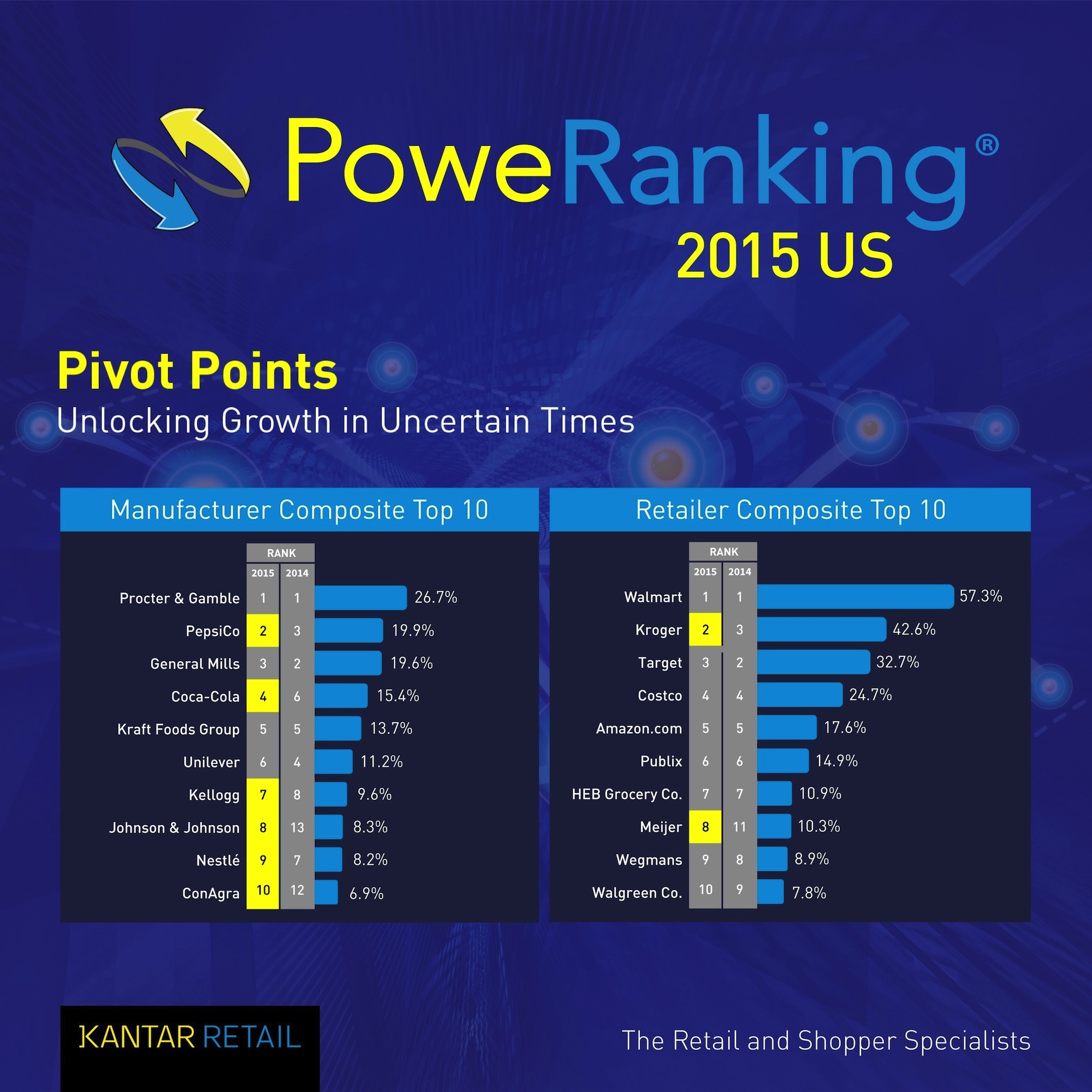