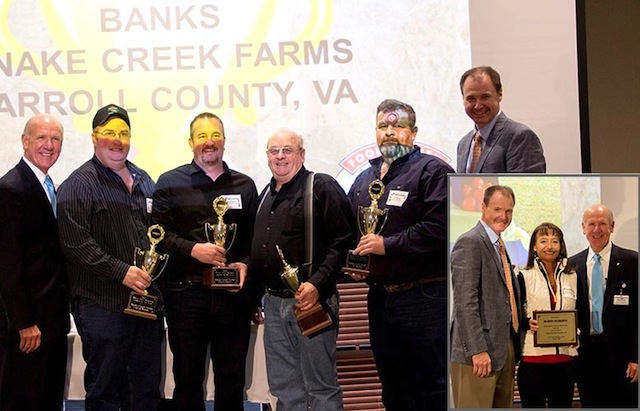 Food City has become known for its locally grown produce initiative. Through a partnership with local farmers, the Abingdon, Virginia-based supermarket chain is able to bring its customers fresh-from-the-field fruits and vegetables during local growing seasons. Many items are delivered directly from the farm to the store the same day they are picked. What began more than 10 years ago with a small number of items supplied by a handful of area farmers has now grown into a multi-million-dollar operation. Today, Food City purchases an average of $6 million in fresh produce from local growers annually.

“We pride ourselves in selecting the best possible products for our customers,” says Steven C. Smith, Food City’s president and CEO. “Our local farms are known for producing some of the finest products in the country. Buying locally is the logical choice. It provides our customers with the freshest produce possible, while lending additional support to our local economies. In many instances, our locally grown produce arrives at the store the same day it was picked. It simply doesn’t get any fresher than that.”

In 2007, Food City created the Wayne Scott Memorial Grower of the Year Award. The award is named in honor of Unicoi County farmer Wayne Scott, one of the first to partner with the supermarket chain. Wayne Scott’s leadership, passion for the business and dedication to delivering the “best produce possible” are just a few of the reasons for his success. The award recognizes one outstanding grower each year.

“Scott Farms was among the first to partner with our company, and Scott’s Strawberries continue to be one of our most sought-after products,” says Smith. “Wayne Scott was one of the finest, most honorable men I have ever had the privilege of doing business with. We thought it befitting to honor his memory and dedication to the agricultural industry with this annual award.”

Snake Creek Farms of Carroll County, Virginia, was selected as this year’s award winner. Founded in 2002, the farm is owned and operated by brothers JC and Leonard Banks and sons Travis and Curtis Banks. The local business has quickly grown into a reputable operation, producing cabbage, pumpkins, sweet corn and several varieties of greens.

Leonard Banks spent numerous hours as a boy working on his parents’ dairy and produce farms, growing cabbage, beans and other vegetables. During high school, he maintained his farm duties while playing football. Since graduation, he has solely dedicated himself to farming and producing the best quality produce possible.

Leonard’s brother, JC, also worked the family farm as a small boy. He, too, played sports but worked in the fields during summer breaks and as needed. After high school, JC received an associate’s degree in machine technology.

Leonard’s oldest son, Curtis, joined the family business as a young child, working on the dairy farm. As a teenager, he began working the fields while playing baseball and basketball, but he always knew he would follow in his father’s footsteps.

Leonard’s youngest son, Travis, also grew up working the dairy and produce farms. During high school, he played football, basketball and baseball but was always available to shoulder his share of the workload. After high school, he, too, obtained an associate’s degree in machine technology.

The family eventually sold its dairy farm, opting to concentrate on its beef cattle and produce operations and increasing cabbage production. As the four family members joined forces, the family business quickly grew from its original crop of cabbage to include sweet corn, beets, pumpkins, kale and collard greens.

The Banks family has worked hard to maintain the high standards set by their parents in order to honor their legacy. Their cabbage and pumpkins have become well known in the region and are sought after each growing season. In recent years, the family members have expanded the facility to allow them to cool their produce before it is shipped to better maintain product integrity.

Food City says it is proud to have partnered with Snake Creek Farms for 14 years, and company officials recently honored the Banks family during a local growers appreciation luncheon.

A special appreciation award also was presented to Robin Robbins of Appalachian Harvest. Robbins was recognized for her efforts to encourage and strengthen the growth and development of organic farming within the region.

In 2003 Robbins began farming organically with her husband and three daughters, producing certified organic produce, including peppers and tomatoes. In 2005, she accepted a position as marketing manager for Appalachian Harvest. Determined to farm full time in order to expand her family’s farm, she also obtained her independent organic certification in 2005 and began diversifying the family farm from field crops to incorporate greenhouse production. She expanded the business to include the production of certified organic culinary herbs.

Robbins taught her three daughters the value of hard work as well as the importance of maintaining high standards. She turned the family business into a viable working farm, creating employment and educational opportunities for her children and area students seeking summer employment. She is a leader in organic production and good agricultural practices. Through her position at Appalachian Harvest, she has assisted hundreds of farmers with certifications and marketing for both conventional and organic produce. Robbins credits her success to her family and farming heritage, the support of Appalachian Harvest and Virginia Cooperative extension and the loyal Food City shoppers who embrace the many family farmers throughout the region.

Food City purchases produce from a number of local farms, including those in Grainger, Blount, Hawkins, Unicoi, Jefferson and Sullivan counties in Tennessee; Scott and Carroll counties and through Appalachian Harvest co-op for locally grown organics from the growers in Scott County, Virginia.

“We enjoy a great partnership with a variety of local farms,” says Mike Tipton, director of produce operations for Food City. “And we are proud to be the exclusive retail outlet for a number of them and of course our customers love the added convenience.”