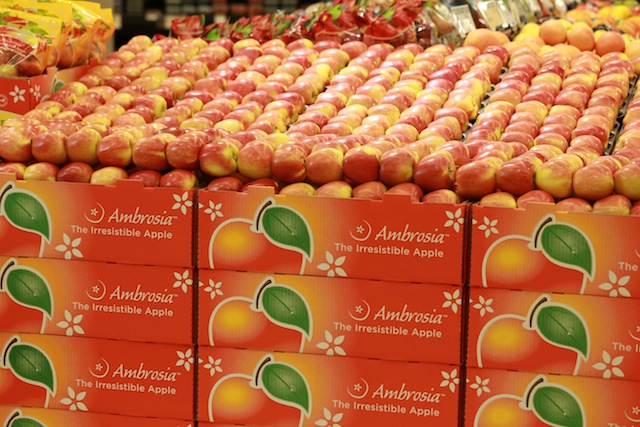 After four weeks and more than 25,000 votes cast via online balloting, the U.S. Apple Association’s March Madness “Chompionship” is down to two finalists, both vying for the title of America’s Favorite Apple.

In a statement released by the U.S. Apple Association, Wendy Brannen, director of consumer health and public relations, said, “After four exciting weeks of fiercely close battles among popular favorites, potential upsets from up-and-coming varieties and an all-round slam dunk in participation from members, we’re excited to unveil the two varieties consumers have selected to go head-to-head for the title of America’s Favorite Apple.”

Columbia Marketing International (CMI) VP of Marketing Steve Lutz added, “We are incredibly honored that Ambrosia apples made it this far. Ambrosia is one of the fastest growing apple varieties in America; consumers are remarkably passionate about their sweet, honey-like flavor and consistent crisp quality and can’t get enough of them. We had hoped this would show up in the voting and are so pleased that it did.”

According to U.S. supermarket sales data from Nielsen, Ambrosia apples have delivered the highest volume growth rate of any of the top 10 apple varieties in the U.S.

“Last year Ambrosia stormed into the elite by becoming one of top 10 best-selling apple varieties in the U.S.,” said Lutz. “This season, Ambrosia moved up to No. 9 and sales continue to grow. CMI growers are working hard to keep up with the explosion in popularity as more consumers discover Ambrosia. With production increasing annually and consistent year-round availability, Ambrosia is poised for continued success in the U.S. as more retailers discover the tremendous sales opportunity brought by adding Ambrosia to their offering.

Ambrosia apples in the U.S. are grown exclusively by McDougall & Sons, an owner of CMI.

On the other side of the bracket, the apple tournament upset of the year occurred when Fuji beat out Honeycrisp in a final four match up to move on to the finals, pitted against Ambrosia.

In Brannen’s statement announcing the two finalists, she said, “We’re a little surprised that Honeycrisp with its cult following didn’t survive, but the road to the final four is full of unpredicted upsets.”

Lutz said, “Fuji is a strong, popular apple. But we like Ambrosia’s chances. We expect Ambrosia to emerge from the consumer voting in the March National ‘Chompionship’ earning the title of America’s Favorite Apple.”