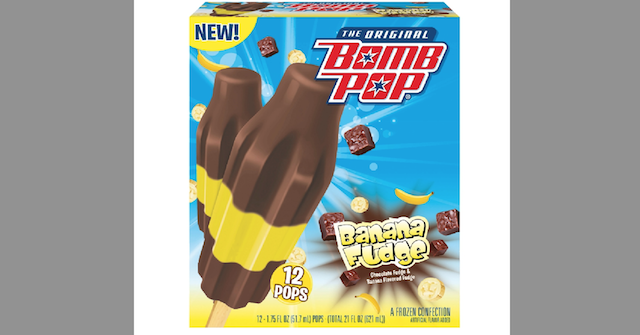 A long-standing fan-favorite on neighborhood ice cream trucks, the Banana Fudge Bomb Pop now is available in convenience stores and retail freezer aisles nationwide. The banana and fudge flavored frozen ice cream treat will celebrate its increased availability with a consumer sweepstakes contest throughout the month of April.

“Fans of Bomb Pop frozen novelties are passionate about bold and intense flavors, which includes the popular Banana Fudge combination,” said Rachel Lukoff, Bomb Pop brand manager at Wells Enterprises. “Our fans are very active on social media where they have spoken loudly on the desire to purchase the Banana Fudge Bomb Pop at retail and in convenience stores. We value their input and are thrilled to deliver on fulfilling the request.”

To celebrate the debut of Banana Fudge in retail and convenience stores, Bomb Pop is inviting fans to submit their original “selfies” showcasing how much they love Banana Fudge Bomb Pops. Participants can upload any of their favorite selfies to win; a Banana Fudge Bomb Pop does not have to be in the photo. One winner will be chosen at random to win a Bomb Pop prize pack.

• Fans age 13 and up are encouraged to upload an original photo (a “selfie”) to their personal Twitter and/or Instagram accounts, including #BombPopSweepstakes, through Friday, April 22;

• Posting site must be set to the public setting to be eligible;

• One grand prize winner will be selected at random to win a prize pack featuring a GoPro Hero4 Silver and Bomb Pop swag; and

• Minors must receive consent from a parent or legal guardian before entering.

Invented more than 60 years ago, the red, white and blue Original Bomb Pop features a three-in-one flavor profile of cherry, lime and blue raspberry and is known for its iconic rocket shape. In addition to the Banana Fudge Bomb Pop, other flavors in the Bomb Pop portfolio include Watermelon, Hawaiian Punch, Warheads, Jolly Rancher and Sugar Free Original.