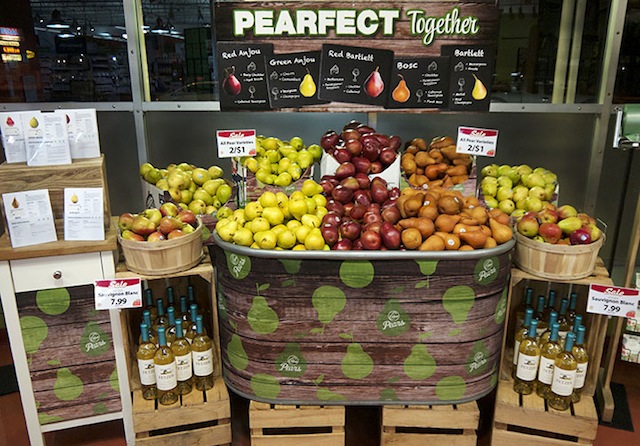 The results are in for the 3rd annual “Pear Up with USA Pears” display contest sponsored by Pear Bureau Northwest.

Produce personnel submitted creative and educational USA Pears displays featuring Green Anjou, Red Anjou and Bosc pears. The displays were out for at least one week during the contest period from Jan. 1–April 15 in U.S. and Canadian stores.

Entries were judged on appearance, creativity and educational value to produce shoppers. Five bonus points were added to entries that included second, smaller sized fruit in bulk, bags or totes. Each entrant received an Amazon gift card in appreciation for them creating a display.

“Ever year, Pear Bureau Northwest celebrates and rewards dedicated produce personnel who build these creative sales-boosting displays. They are the heroes of the industry,” says Kathy Stephenson, marketing communications director at Pear Bureau Northwest. “We appreciate the work that goes into each entry and know participating retailers appreciate the pear category increases of as much as 300 percent reported during the contest.”

Winners in each of three store categories received:

The winners for the 1–5 cash registers category are:

The winners for the 6-9 cash registers category are:

The winners for the 10+ cash registers category are: