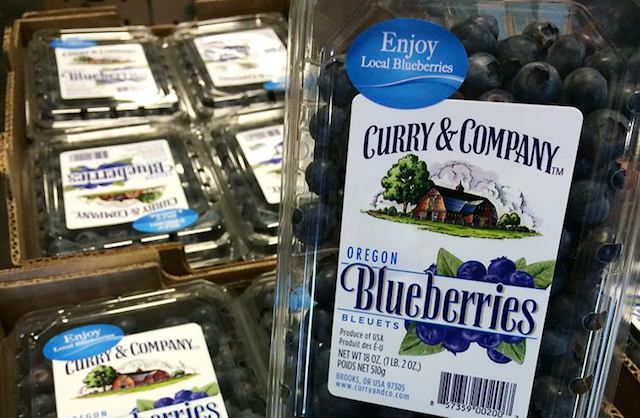 For the second year in a row, the Oregon blueberry harvest started earlier than usual. Harvest began in Oregon’s Willamette Valley with the Duke variety this week. A warm spring combined with ideal growing conditions has Curry & Company estimating that promotional volume will be available the week of June 13. Curry & Company’s season will continue until September.

“We are alerting all of our blueberry partners to be ready to start promoting when the season begins,” said Matt Curry, company president. “There is a great crop on the bushes and we’re excited for the season.”

During the peak of the season, Curry & Company will pack primarily in 6-oz., pint, 18-oz. and 2-lb. clamshells. The larger size packages will be available from the first day of the season, until volumes start slowing down in late July when production will focus on the 6-oz. clamshell.

Curry & Company also is repeating its local program launched in 2015 in the Pacific Northwest. The program features a rotating set of labels focused on local that were placed on clamshells.

“The Northwest retailers really liked our local program,” said Curry. “It gave them a great opportunity to celebrate and promote one of the delicious produce items that is grown in their backyard. We were even able to have a grower go out to some stores to help demo product.”

Curry & Company’s export program continues to grow as well. According to Boriz Manz, export director, there is strong demand.

“We had a strong Chilean blueberry season, and the momentum is carrying over to our domestic product. The outstanding growing season and the anticipated larger-than-normal volumes and large-sized blueberries are creating a lot of excitement,” Manz said.

Curry & Company blueberries are packed and shipped from its warehouse in Brooks, Oregon, and from its Los Angeles warehouse.

Curry & Co. is a supplier of blueberries, sweet onions and onions, and it also has a seasonal Vidalia Sweet Carrot and West Coast blackberry programs.