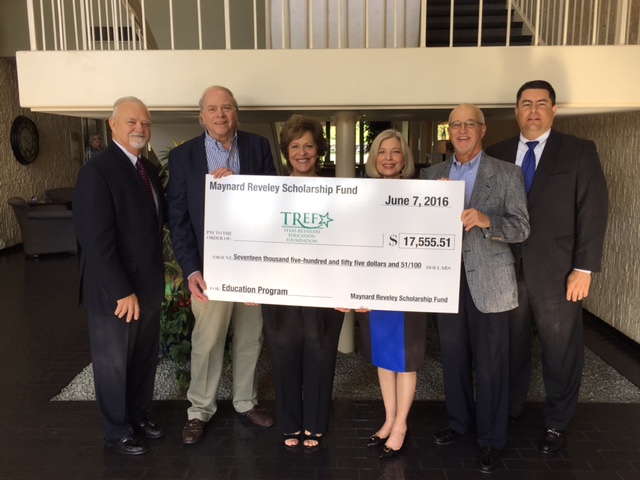 Maynard Reveley, who passed away in 1986, was not just an employee of Service Brokerage Co. He also was a mentor to Gary Trippie, who with his wife, Jeanie, managed the Houston, Texas-based firm.

Now, 30 years after Reveley passed away, his efforts continue to benefit others.

Back when the Houston Food Brokers Association (HFBA) was active with approximately 30 members, the organization decided to start a scholarship program in “Rev’s” name.

The HFBA’s days were numbered. In the mid- to late 1990s, brokerages began to merge because manufacturers and other customers wanted brokers who had offices across Texas, not just in Houston. Eventually that demand would expand to brokers who operated nationally.

In 1997, Service Brokerage Co. merged with San Antonio-based Luke Soules. Then, in 1999, that merged company formed an alliance with Acosta Sales & Marketing and in 2001 became a national firm.

“During all the mergers, people were shuffled around. You and your once biggest competitor were now working for the same company,” Jeanie Trippie said. “It was wild and crazy and only the strongest survived.”

When the HFBA dissolved, a bank account remained, and the intent was to transfer the money to the Houston Grocery Manufacturers Representatives Association (HGMRA). For whatever reason, that never happened. Then the HGMRA dissolved and rolled its scholarship fund over to the Texas Retailers Educational Foundation (TREF) in the first half of 2015.

The years passed, and the time came to shred documents that were no longer needed. As Jeanie Trippie began going through those old file boxes, she ran across bank statements for the Maynard Reveley Scholarship Fund. There were two accounts for “HFBA/Maynard Reveley” at Bank of America.

“First I had to find someone who would talk to me, because if you’re not the signer or your name is not on the account, they don’t want to talk to you,” Jeanie Trippie said. “It took me a while to find somebody at the bank that would talk to me, first, to even find out if this is something we needed to pursue or not.

“I finally got somebody that would at least tell me that the accounts were closed and that the money had been turned over to Texas Unclaimed Property,” Jeanie Trippie said.

This is where Joe Williams, who is a consultant for the Texas Retailers Association and lead staff person for the TREF, and Tracy Davis, director of the University of Houston-Downtown’s Center for Retail Management, come into the story.

“I knew that if anybody knew how to get it, Joe would, and he would help roll it over into the TREF fund,” Jeanie Trippie said.

Gary Trippie got in touch with Williams and Davis, and the process began to retrieve the funds. The last person to sign a check on the account was Don Spencer, who is still active in the industry as a division manager for Performance Sales and Marketing in Houston.

All told, it took about six months to sort it all out, and on June 7, TREF finally procured the funds.

“Gary and I are thrilled that everything worked out like it did,” said Jeanie Trippie. “We are all very pleased that the money will benefit young men and women who want to further their education and remain in this industry.

“Reveley was just a great guy. He loved helping young people get started in business,” she said. “I’m glad it worked out for him. I’m sure he’s very pleased with all this.”