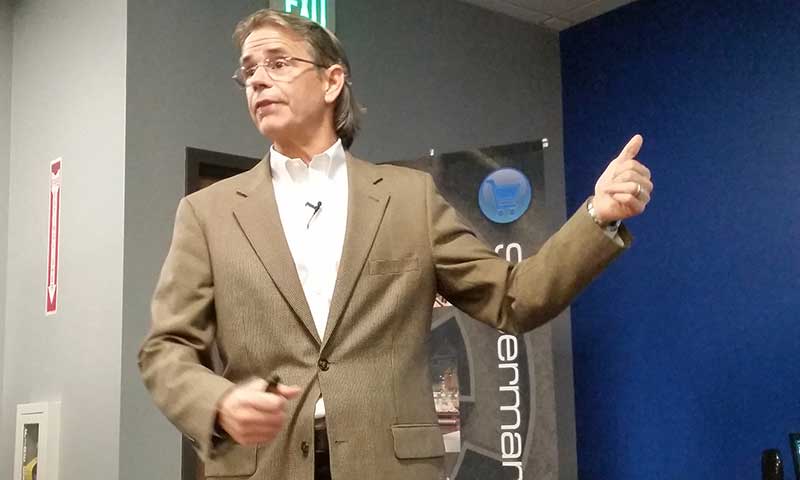 With increasing consumer demand for fresh and minimally processed foods, and increasing competition from alternative channels selling non-perishable grocery items, it doesn’t come as much of a surprise that grocery retailers’ center store sales are flat or declining. But retailers don’t have to—and shouldn’t—give up on their center store sales just yet, according to supermarket expert Harold Lloyd of Harold Lloyd Presents.

In his presentation, “Saving the Center Store,” at Hillphoenix’s recent Supermarket Sense conference in Conyers, Georgia, Lloyd suggested that, contrary to popular belief, it’s really the lack of creativity in the grocery aisles that is the main driver of declines in center sales, rather than any consumer trend or competitor.

“Why would anyone want to trek up and down 10 to 12 almost identical, mind-numbing 88-foot aisles gazing over 45,000 items and almost a billion shelf signs when they can sit in their pajamas at their own kitchen table and order the exact same stuff, and have it delivered for almost the same price and with much less aggravation?” Lloyd wrote in the preface to his presentation.

The good news is that grocery retailers are creative folks, and if they can bring some of the “pizzazz” they’ve given their perimeter departments to the center store—“the heart of our business”—they can stop that decline, Lloyd said.

From redesigned shelves to floor decals to simple callouts, Lloyd offered show attendees a number of ideas, big and small, to take back to their stores, but they all came back to two concepts: access and allure. To boost center sales, retailers have to ensure shoppers have easy access to products in the aisles, but they have to have a reason to walk down those aisles in the first place.

If your center store aisles are “mind-numbing” rows of nothing but thousands of products, shoppers aren’t going to pay them much attention, but there are endless ways for retailers to break up that monotony.

Lloyd pointed to a store he visited that had a projector displaying a rotating light on the floor of an aisle.

“That grabs my eye. Maybe I see something I need, and I want to see this light. The light is an attraction,” he said.

But retailers don’t need to shell out the money for an expensive projector to get a similar effect. Simple floor decals can do the trick. Borrowing the idea from a Chicago grocery store, Lloyd recommends placing decals throughout your store to highlight signature items.

“I love floor decals. Strategically placed, 10 in the store,” he said.

Decorations within an aisle also can liven up the space.

“Back in the day, I read an article that said 80 percent of the people that come into a grocery store do not go down the greeting card aisle. But 85 percent of those who do buy a greeting card. When I read that, I said, I’m changing my ways,” Lloyd told attendees. “And I went and put helium balloons that I sold on one side. On the other side, I put wrapped empty boxes on fishing line in clusters. All-occasion, holiday, a cluster of all-occasion—four big clusters of hanging different sizes and shapes of boxes, all wrapped with bows.”

He added piñatas hanging from the ceiling and, along the bottom the shelves, he asked his vendor to install rope lighting.

“They loved it! They paid for the whole thing,” he said. “When you push a shopping cart by my greeting cards, you’re going down that aisle for sure.”

An even simpler idea along those same lines is to invite shoppers to bring in photos of their pets to place above the pet food aisle. It’s cute, it brings some life to the aisle and shoppers who have brought in photos won’t be able to resist walking that aisle whenever they come into your store, Lloyd said.

Another way to break up the monotony of an aisle is to change up the shelves themselves. While it’s more complicated to alter your shelves than to just add floor decals or some balloons, Lloyd recommends bumping out a curved shelf halfway down the aisle.

Bring on the samples

Even better than a bump-out is a sampling station in the middle of an aisle. A ShopRite that Lloyd visited in South Africa had taken out eight feet of its coffee run, added two new endcaps and put a woman brewing coffee behind one of them. The store had been running this station full time for more than a decade, and the coffee companies all pitched in together to pay for the demonstrator’s salary.

But a retailer doesn’t have to go through the time, trouble or expense to bring that kind of interest and aroma to the coffee aisle. One of Lloyd’s latest ideas is to take out four feet of the coffee aisle and set up a self-serve sampling station with a Keurig machine and a variety of K-cups for shoppers to choose from.

“Let them brew a cup of coffee for themselves while they’re shopping,” he said.

Retailers who implement the idea could charge 50 cents or so, on the honor system, for the coffee, but the station will pay for itself even if they don’t charge anything.

“If you know the statistics—people who are eating or drinking something spend up to 50 percent longer in a store,” Lloyd said. “That’s why Costco loves their demos. One more minute in your store is $2 in your drawer. Gross profit on $2 is 30 percent—60 cents. Sixty cents for a cup of coffee, and I’m charging 50 for it. Bingo. Give it away free and we’re OK.”

Bring the same concept to the snack aisle with a popcorn machine, and pop fresh popcorn every couple of hours, he said.

The No. 2 reason people shop at Costco is “the treasure hunt effect,” Lloyd said, and it’s relatively easy for supermarket operators to bring that same effect to their own stores. One way is to include one fixture on every center store aisle featuring an unadvertised item at an incredibly low price, he said. One of Lloyd’s favorite ideas, borrowed from H-E-B, is to include three brightly-colored coupons spread throughout every aisle, offering an average of $1 off a select item.

“You see $1 off the spaghetti sauce, and you go to the next aisle and see three more of those, kind of scattered throughout the aisle, guess what you’re doing? You’re not giving up $3 down every aisle,” Lloyd said. “There’s $3 of savings down that aisle. I’ve got to go down that aisle.”

Another relatively easy strategy to bring the treasure hunt feel to a store is to include “In This Aisle” display signs featuring a product and its price midway down every aisle. The advertised product doesn’t need to be right under the sign, just somewhere in the aisle, encouraging shoppers not only to come down that aisle but to browse.

Lloyd also recommends placing 400 “new item” signs throughout the store: 200 in general merchandise and 200 in health, beauty and wellness. Products with a sign will sell 48 percent more than those without them, Lloyd said, and they will draw in early adopters—those consumers who regularly and actively seek out new products. To keep track of all these signs and to make sure they don’t stay on any one item for more than 30 days, Lloyd wants retailers to create a “new item manager” position in their stores, which also can serve as a training position for a future grocery manager.

Grocers’ online competition is making shopping easier and more convenient for consumers, so grocery stores need to do the same. And they can be successful with some simple ideas. To help shoppers navigate, consider including shopping lists that include aisle numbers in relevant locations throughout the store, like a party shopping list in the bakery or deli or with the toothpicks or fancy napkins, or themed shopping lists for different times of the year, like a back-to-school, or a Thanksgiving dinner list.

Lloyd also suggests numbering freezer doors. This lets employees direct customers looking for a specific item not only to the right aisle, but the exact door it’s behind. Larger stores should even consider placing store directories throughout the aisles.

“My stores were pretty big, so I put these on the ends of every run. One side was a map, and one side was an alphabetical directory,” Lloyd said. “And I put them on 18 inches of chain, not on a shower curtain hook. Why 18 inches of chain? Twenty-five percent of our shoppers shop without the glasses they need to see clearly. They don’t like the way they look with the glasses so they go ‘naked.’”

For those shoppers who may need some help reading small print, Lloyd pointed to one store that included a magnifying glass on a chain in the pharmacy, health and beauty aisles.

To make small grocery items that tend to be bought in quantity, like single-serve cups of ice cream or cans of cat food, easier to corral, make space for a little roll of bags, Lloyd said, just like in the produce department.

With a little creativity, there’s no end to the ways retailers can make the in-store shopping experience easier and more enjoyable for customers.

An essential part of making shopping easier is making sure customers can access the aisles and the items they want. When it comes to aisle sizes, that means following Lloyd’s “9-7-5” rule, which calls for 9-foot aisles in the perimeter, 7-foot aisles minimum wherever there are doors and 5-foot aisles throughout the rest of the store. That also means not blocking or clogging aisles with wings and shippers that prevent two carts from passing side by side.

“You can’t shut down an aisle to two and a half, three feet,” Lloyd said. “You know how wide a shopping cart is? Get a tape measure out. It’s 22 inches. You have a purse on the side of it, a wide body behind it, and you have a cork, ladies and gentlemen.”

And a shipper does not have to physically block an aisle to inhibit shopper access.

“I beg vendors at every seminar I can—please make your shippers 360 or at least 180 degrees,” said Lloyd. “You do a 90-degree shipper, that’s one-sided. You know what customers in focus groups tell me? They feel stupid going down that aisle. They’re going the wrong way.”

Having easy access to all the items shoppers want also means providing convenient ways to transport them. A customer without a basket or cart is a $10 customer, Lloyd said. With a basket, that number rises to $20 and, with a cart, it’s $40. If a store is merchandising well, shoppers who come in thinking they won’t need a basket or a cart soon will wish they had one, Lloyd noted, and to give them easy access to the extra products they want, retailers need to provide their shoppers with baskets and carts in at least six locations throughout the store, including a small cart corral near the back.

Some of these tips, along with others, can be found in Lloyd’s latest book, “Supermarket Rules—52 Ways to Achieve Supermarket Success.” Proceeds from the sale of the book are donated to various charities. For more information or to contact Lloyd, visit hlloydpresents.com.