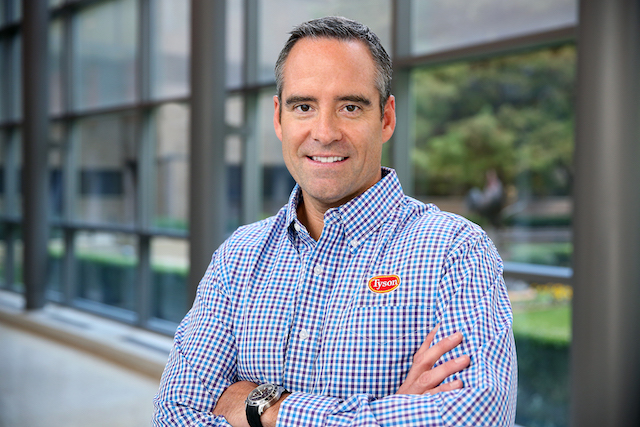 Tom Hayes, president of Tyson Foods, will succeed Donnie Smith as CEO on Dec. 31. Hayes will continue to serve as president and has been appointed to the board of directors, effective immediately. Smith, who has been CEO since November 2009, will be available to consult with the company for a three-year period.

“Tom Hayes is a proven leader who has played an important role in creating today’s Tyson Foods and driving growth across our company,” said John Tyson, chairman of the board of directors. “The plan we have announced today will result in a smooth leadership transition that positions Tyson Foods for continued growth and innovation. The board’s decision to name Tom CEO at this time was based on both his track record and how his skills align with the company’s strategic direction and continuing evolution. The board has the utmost confidence in Tom’s ability to build on the platform Donnie has created, to expand further into developing markets, new product categories and proprietary food experiences, and to continue investing in our core nine categories.

“Donnie is leaving the company in great hands, having developed an impressive pipeline of management talent while positioning us for continued growth and change,” Tyson added. “The board and I thank Donnie for his many contributions and wish him all the best.”

Smith became CEO of Tyson Foods in November 2009, and has helped to build a platform to support the company’s hybrid strategy of branded prepared products and fresh chicken, beef, pork and specialty meats. Hayes was appointed president earlier this year and is leading Tyson Foods’ transition to the hybrid model.

Working with Smith to leverage Tyson Foods’ scale and develop brands to drive growth, Hayes has been responsible for retailed packaged brands, international and global growth, North American sales, strategy and new ventures, as well as the support functions of corporate affairs and operations services.

“I take great pride in having led Tyson Foods for the past seven years. In addition to helping the company deliver growth and strong shareholder returns, I am also proud of the efforts we have undertaken to make Tyson Foods a company with a conscience, focused on providing consumers wholesome, affordable food and making a positive difference in people’s lives,” Smith said. “When Tyson acquired Hillshire Brands in 2014, with the support of the board and the family, we embarked on a new strategy to integrate the strengths and products of each company into one company, and the resulting hybrid model has been a success in no small part thanks to Tom’s strategic, operational and commercial accomplishments. I am confident that Tom is the right CEO to continue the transition we have started and lead Tyson in the next phase of its strategic development and growth. I look forward to supporting Tom and the rest of the management team.”

Hayes said, “I am humbled to be named the next CEO of Tyson Foods and am grateful to the board and the family for providing me with the opportunity to lead this incredible company. Tyson Foods is well positioned to realize numerous growth opportunities—our company has a solid strategy that leverages compelling market dynamics and an experienced and highly capable management team and many thousands of hard working and dedicated associates.

“I am especially thankful for Donnie’s unwavering support and advice,” Hayes added. “He has set a wonderful example of how to greet every challenge and opportunity with the same diligence, thought and skill that have come to define his career.”

Hayes is a 29-year veteran of the consumer products industry. Prior to his role as president, Hayes was chief commercial officer at Tyson Foods, overseeing all North American sales, in addition to the foodservice prepared foods business. He also previously served as president of foodservice. Previously, Hayes served as chief supply chain officer for The Hillshire Brands Co., responsible for operations, including procurement, manufacturing, food safety and quality, engineering and logistics. Before that, Hayes was SVP and chief supply chain officer for Sara Lee North America, responsible for supply chain activities for the company’s North American retail and foodservice businesses. Prior to this role, Hayes was president of Sara Lee Foodservice.

Before joining Sara Lee in 2006, Hayes served as group VP of US Foodservice Inc., where he oversaw the turnaround needs of broadline distribution facilities in the Northeast. Hayes also has held general management, sales and marketing roles at ConAgra Foods, The Fort James Corp., Stella Foods and Kraft Foods.

Hayes has served on the executive committee of the board of the North American Meat Institute (NAMI) and the board of directors for the International Foodservice Manufacturers Association (IFMA). He earned a bachelor of arts degree in psychology from the University of New Hampshire and an MBA from Northwestern University’s Kellogg School of Management.