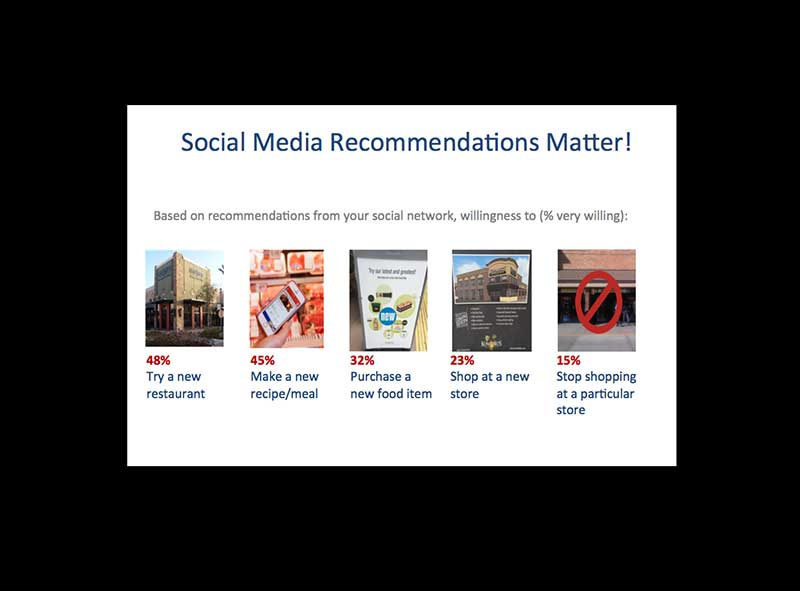 While 87 percent of supermarket shoppers in the study report regularly following one or more social media sites, just 25 percent indicate they are friends with or connected to their primary grocery store. Social media sites used most heavily by supermarket shoppers include Facebook (89 percent), YouTube (53 percent) Twitter (30 percent), Pinterest (29 percent) and Instagram (28 percent). It is important to stress, however, that members of various generations use social media differently. For example, Millennials use YouTube, Instagram and Snapchat more heavily than other generations.

RFG Principal Brian Numainville said, “Closing the social media gap presents a real opportunity as many shoppers will change their behavior based on recommendations from their social network. For example, our research shows that 45 percent of supermarket shoppers are very willing to make a new recipe or meal and 32 percent are very willing to purchase a new food item based on social network suggestions.”

More than half (56 percent) of supermarket shoppers interact with their primary food store on one or more digital platforms. Among those who do, checking the digital circular is most prevalent (65 percent), followed by researching special promotions (48 percent) and building grocery lists (46 percent), among other activities. Millennials are interacting on digital platforms at a higher rate (66 percent) as compared to Boomers (47 percent).

While 47 percent of shoppers indicate that their primary store has an app or mobile-enabled site, 44 percent were not sure (and an additional 10 percent said their primary store did not). This finding clearly illustrates that retailers need to do a better job communicating with customers regarding the types of digital tools available.

In-store satisfaction, on a scale of one to five, registers at 4.39 for supermarkets. Only one type of more mature online shopping platform, general/specialty food websites offering delivery by mail or shipping company, currently surpasses this score with a 4.43. However, online shopping formats such as online grocers with delivery and no physical stores (4.36), traditional grocers with delivery (4.35), and traditional grocers with pick up (4.25) all have ratings that are closing in on the rating in-store.

RFG Principal Doug Madenberg said, “Although in-store satisfaction ratings are higher than most of the online shopping satisfaction ratings at present, the gap is closing and we would expect in the future that these ratings will continue to strengthen as online food shopping services refine their offerings and continue to focus on the best possible experience for their customers.”