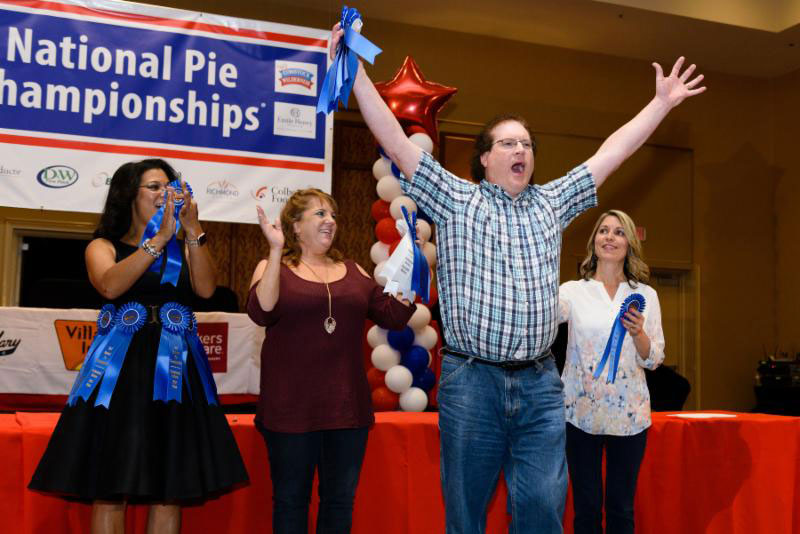 For the first time ever in the American Pie Council (APC) National Pie Championship’s 23-year history, both the Amateur and Professional Divisions’ Best in Show winners were men. The professional winner was Andy Hilton, a Publix baker from Davenport, Florida, who topped the Professional Division with his Dreamy Lemon Pie. Christopher Taylor, an amateur baker from Atlanta, took home the blue ribbon in the Amateur Division for his Checkerboard Peanut Butter Pie.

The 23rd APC National Pie Championships were held May 4-6 at at the Rosen Centre Hotel in Orlando.

Hilton has competed in the APC National Pie Championships for 12 years. He’s racked up about 20 APC ribbons, including five second-place finishes in one year. He’s competed in the Food Network’s “Cupcake Wars,” won two major baking competitions and several Best in Show awards from Florida State Fair competitions, yet the APC National Pie Championships honor had eluded him—until this year.

“I hadn’t gotten the brass ring yet, but now I have it. It’s not a bragging thing, it was a personal quest. I am, for this moment, an expert in pie,” said Hilton, who fondly referred to his win as his “Academy Award.”

Hilton entered six different pies this year. The Best in Show pie, Dreamy Lemon Pie, entered in the Comstock category, was particularly special to him because the simple recipe is one that others could quickly and easily make with the readily-available canned filling, giving them more time to enjoy time with their families.

“That’s what it’s all about,” said Hilton. “Pie is like family. It has an appeal like no other pastry. Picnics—pie. Thanksgiving—pie. America is baseball and apple pie. People will look over the other pastries and seek out something very friendly to them—and that’s pie.”

Hilton got into pie making after leaving his family’s cloth diaper business about 11 years ago. The move to Florida made him miss his mother’s pies and he began baking as a hobby before realizing he wanted to do it for a living. He applies his engineering-focused views from his previous career to this one.

“There’s a science to it. There has to be the right filling-to-crust ratio so there’s not an imbalance,” said Hilton. “For instance, in key lime pie, you’ve got a creamy filling, but too much crust can throw the entire taste out of whack.”

With his $5,000 prize money, he plans to take his wife on a big trip next year to celebrate their 30th anniversary. Most importantly, though, he said he wants to continue to spread his love of pies.

“You give away a little bit of yourself in every pie you make.”

Amateur winner is a doctor by day

Taylor, and his partner, Paul, both medical doctors in Atlanta, have been competing in baking competitions for the past five years. To keep from competing against one another, Paul competes in the fruits and berries categories and Christopher concentrates on the chocolate and cream categories.

“We actually have a spreadsheet in the kitchen to schedule our baking times,” said Taylor.

Taylor’s first victory was six years ago in a local pie contest. He and Paul learned about the National Pie Championships through another contestant’s social media post and decided to enter themselves. Their first attempt at the competition proved fruitless, but learning from the other competitors, they realized that aesthetics were as important to the judging as the taste of the pie. They self-taught decorating techniques by watching online videos and Taylor would test his recipes weekly at work in what his co-workers dubbed “Pie Tuesdays.”

Since 1995, amateur pie makers, professionals and commercial pie manufacturers from throughout the country and Canada, have been competing for the coveted titles and cash prizes. Entries are judged based on appearance, taste, consistency, crust, and the overall product. This year, a total of 789 pies were entered across three divisions: 22 commercial bakeries entered 470 pies; 16 professional bakers entered 113 pies and 35 amateur contestants entered 206 pies.

The American Pie Council says it is the only organization committed to maintaining America’s pie heritage, helping pass on the tradition of pie making from generation to generation. The APC offers personal, professional and commercial memberships.

AppHarvest Ships First Harvest Of Tomatoes On The Vine