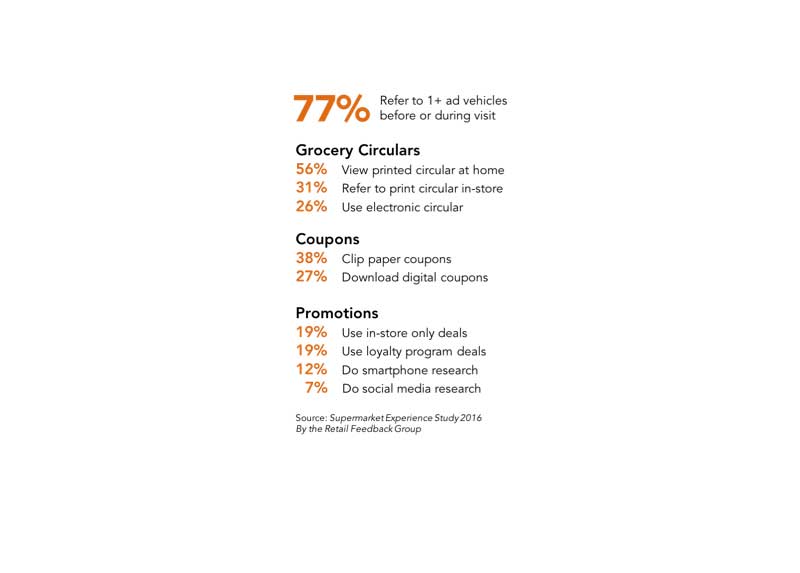 To entice consumers to shop in-store or online, supermarkets must set aside a budget for advertising.

With a range of 0.02-4.0 percent, food retailers spend an average of 1.25 percent of sales (excluding pharmacy and gasoline dollars) on advertising.

The recently released “2017 Promotional and Advertising Practices Study Among U.S. Grocery Retailers,” published by Aptaris and dunnhumby, says about one-quarter of retailers expanded their advertising budget vs. 2015 while 9.8 percent reduced their ad dollars.

The advertising budget among grocery stores with printed circulars in all their stores averages 1.27 percent; those without a circular average 1.03 percent. Budget percentages tend to be slightly higher among larger chains as well. These companies also are more likely to run a wider range of print, digital, mobile and social media than one-store operators.

Connecting with consumers
Consumer uptake of grocery promotions underscores the importance of connecting with shoppers both pre-trip and in-store. According to the “2016 U.S. Supermarket Experience Study” by the Retail Feedback Group, 77 percent of shoppers refer to one or more advertising vehicles before or during the visit.

While the number of vehicles used per shopper is relatively unchanged, the range of vehicles used across shoppers is ever widening. Consumer usage is trending away from reviewing the paper circular at home, even though this remains the highest-used advertising vehicle.

According to the Supermarket Experience Study, promotional research is increasingly shifting toward mobile and digital. This shift can be seen among all generations, but is driven by the Millennials, with fewer than half (46 percent) of Millennials checking the print circular at home vs. 64 percent of Boomers. Millennials are two to five times more likely to use apps, smartphone research, social media specials and other digital offers. Few retailers forgo a print circular (10.8 percent), and about one in 10 have reduced coverage to just some stores. The latter is more commonplace among larger chains.

Food retailers’ changing commitment to print circulars
Mirroring the consumer landscape, food retailers currently allocate a majority share of the budget to the print circular, at 57.6 percent, but they expect a reduced reliance on it in the coming years. Anticipated allocation for two years from now averages 45.7 percent, and five years from now, retailers expect the share to be down to 33.0 percent.

Other findings of note include:

• 66.7 percent expect the budget allocation to the print circular to be lower in two years;

CPG vendors are willing to experiment with digital funding
Less than one-fifth of the total circular cost is offset by vendor funds. Shares range from none to fully 100 percent for a handful of retailers—underscoring the fact that circular practices range widely. And these practices are changing, with 13.7 percent of respondents reporting that most CPG vendors are willing to shift traditional trade/TPR dollars to digital/mobile marketing. An additional 47.1 percent believe that some, but not all, CPG companies are willing to do so. Retailers believe that at least some CPG companies have separate budgets for additional mobile/digital funding beyond traditional funds.

One respondent noted, “I think CPG is having these conversations with the big retailers to understand how well it is working in terms of translating into a sale. It’s hard to have these conversations as a one-store operator, even if we are very sophisticated with our digital outreach.”

Optimizing trade funds
CPG trade spending, also referred to as cooperative trade funds, plays a critical role in attracting customers and supplementing retail marketing programs. Unfortunately, the complexity of obtaining funds presents challenges for many retailers. According to a study co-authored by Local Search Association and Manta, $36-70 billion in trade funds are available each year, and roughly 50 percent of those funds remain unclaimed at year’s end.

Missing out on these funds has an enormous effect on retailers’ bottom lines. Many of the difficulties retailers’ experience in obtaining eligible funds include:

In line with the findings of this study, the shift to customer-centric marketing is creating more opportunities for CPG funds targeting digital platforms, which are expected to grow over the next decade.

New technologies are increasing retailers’ ability to capture more CPG dollars through the use of:

• Ability to create and deliver shopper-centered deals through multiple channels

Since advertising is critical to driving store traffic, it’s important for food retailers to stay on top of budget allocation best practices.

The 2017 Promotional and Advertising Practices Study, published by Aptaris and dunnhumby and conducted by 210 Analytics, compiled data from nearly 70 food retailers representing more than 4,600 stores across 34 states. The comprehensive study provides insights into grocers’ investments in advertising, marketing and promotions. This is the final piece in the four-part series (find part 1 here, part 2 here and part 3 here). To receive a free copy of the full results, email Rich Keiser at [email protected]. The Local Search Association study, “Breaking Through the Co-op Clutter,” can be accessed at thelsa.org/research/breaking-through-the-co-op-clutter.aspx. 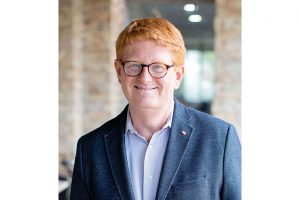