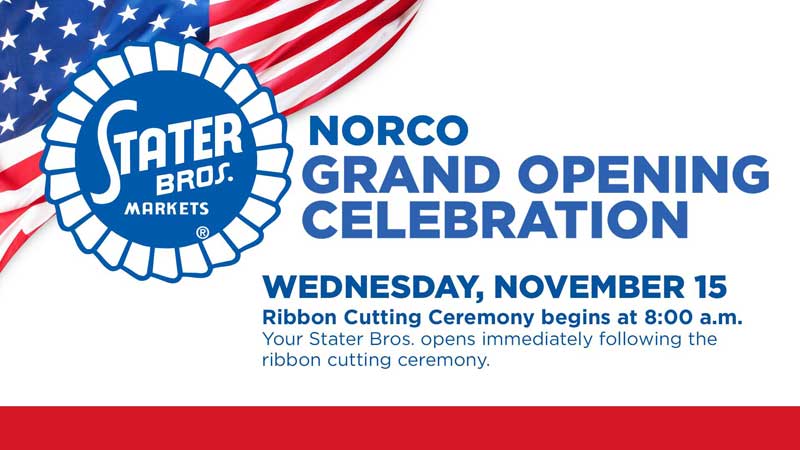 Stater Bros. has opened a new supermarket in Norco, California, showcasing the company’s updated format and additional features. The store is located at 2430 River Road in the Norco Village Shopping Center, developed by Lewis Retail Centers. To celebrate the grand opening, a ribbon cutting ceremony was held Nov. 15 at 8:00 a.m., and the store officially opened for business immediately following the festivities. The store will be open daily from 6:00 a.m. to 11:00 p.m., and will be led by Store Manager Aaron Ryan, who has 24 years of service with the company.

“This new supermarket demonstrates Stater Bros.’ ongoing commitment to the Norco community we’ve served since 1971,” said Pete Van Helden, president and CEO of Stater Bros. Markets. “Throughout the years, our Norco customers have been amongst our most loyal, and we are thrilled with the wide variety of services and new product offerings that we’re bringing to their community.”

To further celebrate the grand opening and to honor Stater Bros.’ long-standing tradition of giving back to the communities it serves, Stater Bros. Charities will present $30,000 in donations to local organizations that support hunger relief, children’s well-being, education, health, law enforcement, and veterans and active service members.

Farmer John Embarks On ‘Thank You Tour’ For Frontline Workers