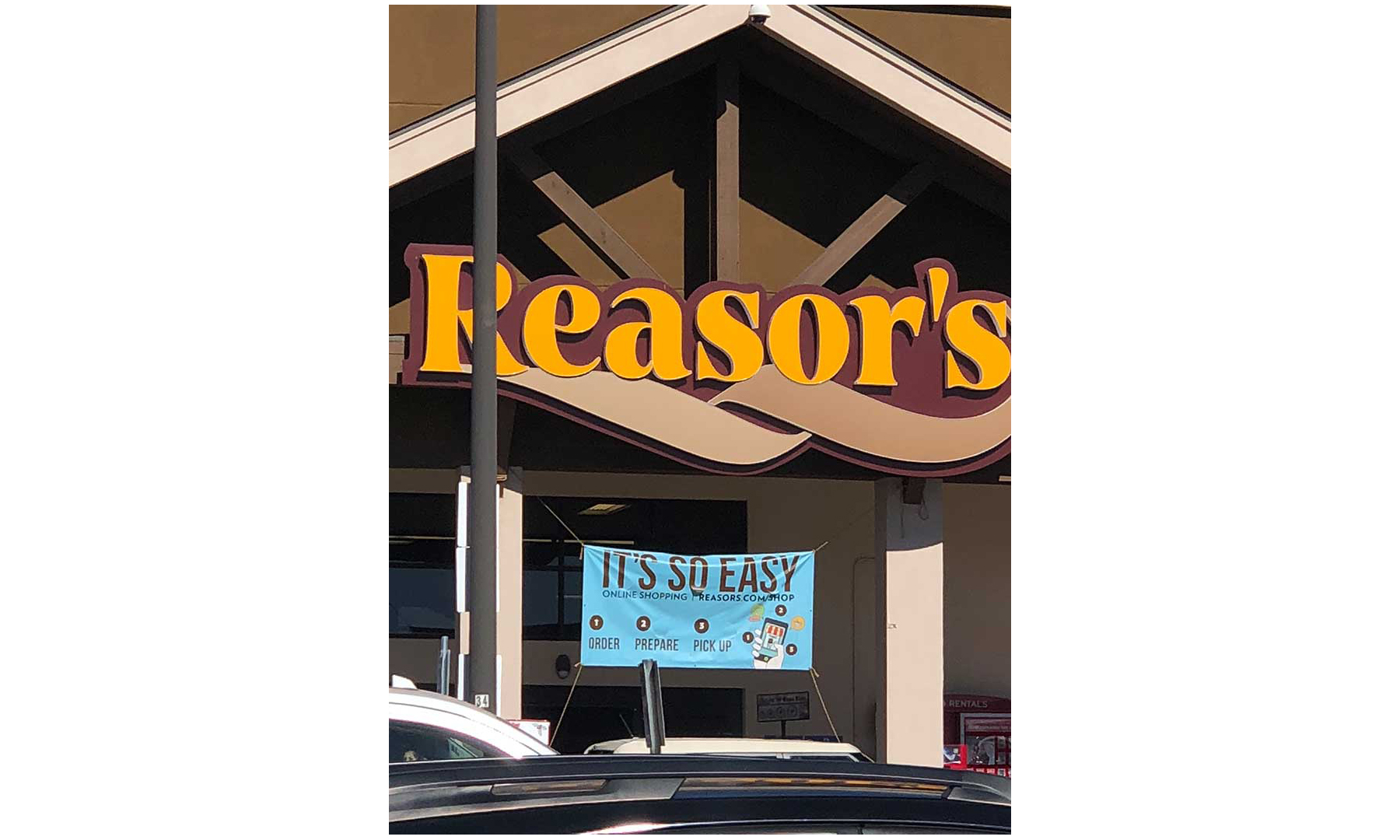 by Terrie Ellerbee/editor—Midwest and Southwest

Several factors are driving change at Tahlequah, Oklahoma-based Reasor’s as it celebrates its 55th anniversary this year. Perhaps the most significant will be the ability to sell full-strength beer and wine beginning in October.

For decades, Oklahoma grocery stores have only been allowed to offer beer that is 3.2 percent alcohol by weight (commonly known as “3.2 beer”). CEO Jeff Reasor chaired a coalition of retailers that led the charge for change. Voters approved full-strength beer and wine sales in grocery stores in November 2016. The law takes effect in October of this year.

Another factor is the shrinking grocery store. Reasor started noticing about four years ago that grocery stores in markets across the U.S. were getting smaller.

These two factors are coming together at the employee-owned company as it shrinks the size of its grocery offerings to make way for beer and wine.

“In the next year to a year and a half, we’ll be readjusting our stores to make room for all that,” Reasor told The Shelby Report’s Jan Meade, VP, Southwest. “We will make space for those beer and wine sections as we begin to work those in.”

Another factor driving change is the proliferation of discounters and specialty grocers. Reasor said there has been so much grocery retail square footage added to the Tulsa market in the last five years that sales are spread too thin. Even as Reasor’s wants to open more locations, the timing doesn’t feel right. Instead, Reasor’s is looking within for change.

“We needed to refocus a little bit with all the competitors, more on the lower end and coming from Europe; you’ve already got Walmart and Aldi kind of dominating that bottom tier and we’re never going to knock them off,” Reasor said. “I don’t think anybody is really burning up anything—and I would include Walmart, Whole Foods and everybody else.”

One Reasor’s actually shares a parking lot with Whole Foods.

“I know a little bit about some of their struggles, just by virtue of the people that moved over that we have picked up,” Reasor said. “Some of them were very knowledgeable and capable, so that was good. It’s not ‘woe be unto us’ because every market is different. It’s tough in its own way. You just keep plowing ahead and keep planning for the future, which we’re doing.”

For now, Reasor’s is focusing on ways to differentiate itself even as it outperforms competitors. Reasor says the chain sells more organic items than Whole Foods and Sprouts Farmers Market.

“We don’t get credit for it, so we’ve got to think our way through some of those things,” Reasor said. “Everybody is identified for those different things, so we have a challenge. And one of those is local.”

Reasor’s is looking to build on its identity as the local grocer. Last summer, it held a large produce sale. Oklahoma products were displayed out in front. There was a 10-day period when everything came together. Produce was plentiful and shoppers could really see the chain’s connections with local farmers.

Unfortunately, that kind of availability comes and goes with the seasons.

It’s an effort that has taken time. Reasor’s brought in about 60 farmers several years ago to talk about what and how much they could grow in order to meet the needs of the chain’s customers.

“One of those groups that came in was called Scissortail Farms. They’ve got a little over an acre with a hydroponic, organic system where they were growing lettuces and they were also doing herbs,” Reasor said. “We told them we really needed the lettuces, and actually helped them do the packaging. We got into arugula, the butter lettuces and other things we knew we would sell and what those quantities would be.”

Scissortail changed its production in an attempt to meet Reasor’s needs. The lettuces now are available in about two-thirds of Reasor’s stores, so it can be hit and miss. But the company will continue to foster these types of relationships.

“We’re trying to work with them because they’re fairly new out there on the market,” Reasor said. “They’re trying to understand what they need in the market and the price points they need to get to make it competitive with all the Doles and the T&A (Tanimura & Antle) and anybody that’s doing bagged salads or plastic clamshells. There are a lot of things there on the local side that we’re working on.”

As digital communications with consumers become more common, it should become easier to educate and alert shoppers about local products that are available in Reasor’s stores on any given day.

Employees play a role in educating shoppers, of course. Reasor said the chain would like to find more foodies and people who really enjoy the work.

“We’ve been really fortunate to do that on our cheese kiosks and some of the other departments that we’ve tried to expand on a little bit,” he said. “We’ve found some people who are really good at taking that and being able to push it and take it to the next level and have actual knowledge. We see that from the feedback from the customer as well.”

Reasor’s has been offering online shopping since 2003. It began offering the service because it was an area seemingly on the tipping point. It also was able to pick up a software package that worked well.

“I enjoyed using it myself. Interestingly enough, my wife was not nearly as much a fan of it as I was,” Reasor said.

But then interest in online grocery shopping began to slow. Widespread adoption didn’t materialize back then likely because online shopping was still being done on desktops.

“Roll forward several years and I have a little egg on my face because I did not see the tipping point of the online, although it was happening in other industries—clothes, shoes,” Reasor said.

The chain chose Freshop to help up its online shopping game.

“They’ve really been good not only on the desktop version but also put it on the phone, and so that’s where the big difference has been,” Reasor said. “There have been challenges on our end on descriptions and pictures and so we are working through that process, but the acceptance has been good.”

So good in fact that orders—and dollars—almost doubled the first week. At the time of the interview in November, sales had tripled and were still growing.

“Our plan now is to double that, so we’ll see how that goes,” Reasor said. “You really have to have your mind open as to how best to go to market. It isn’t just the banker’s wife who is wanting to do that. It’s now the young couple driving a pickup; all income levels.”

When 100 or 200 fewer people start clicking instead of shopping in-store, locations that average 70,000 or more square feet will become quieter. That is another reason less space will be needed.

With all that online shopping—and Amazon’s influence—shoppers today expect the convenience of delivery. Reasor’s has bet on Shipt to deliver.

“The hard part’s always been that last mile,” Reasor said. “We didn’t think that was something we wanted to take on.”

Reasor went to a Shipt kickoff event and found that many of the personal shoppers—some 300 or so—already were Reasor’s customers.

Shipt is still growing, still learning and challenges still exist, Reasor said. The recent holiday season was a case in point. At the time of the interview with Meade on Nov. 20, two stores already had sold out of prepared holiday meals in spite of a 10 percent increase in offerings vs. the holiday season in 2016. That was a good thing. But Shipt wasn’t geared for that, Reasor said. Debriefs were planned for after the holidays about what was missed and what could have been done better.

What Amazon can’t do

When Amazon purchased Whole Foods in 2017, a lot of folks saw it as the end of brick-and-mortar grocery as we know it. Reasor is not sure exactly how all that will play out but made the point that Amazon has not been successful with everything it has tried. After all, it closed cashier-less Amazon Go stores (which soon may open again) and it also shut down its Amazon Fresh grocery delivery service in some markets. 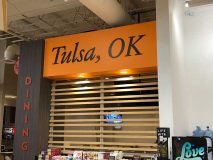 “I think (Whole Foods) was just a foray into grocery. It gave them 400-plus locations,” Reasor said. “Is it going to totally revolutionize grocery? I don’t know. I just see that as a real tough nut to crack.”

There are other competitors out there driving another change at Reasor’s. It will offer its own meal kits similar to those sold by New York-based Blue Apron and Germany-based HelloFresh. Reasor’s meals will be inspired by locally celebrated Chef Michael Fusco, who came on board last year as director of culinary experience.

“He’s been around Tulsa for almost 20 years now. Michael has been reviewing the online dinners. He’s able to chef them up a little bit,” Reasor said. “He wanted to change the potatoes we were using in the dinners. Little things like that. We already are in production on a lot of those items and we’re closer to the consumer.”

Reasor said Chef Fusco has seen that in some areas, the grocery store can do things better than a restaurant.

Appealing to the ladies 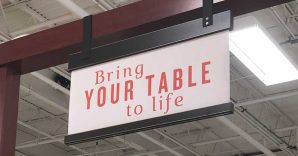 Reasor’s has a “Bring Your Table To Life” theme. The grocer is trying to offer all that the tagline implies, including tableware and such.

“One of the things we’ve done is we put welcome tables at the front of about two-thirds of the stores,” Reasor said. “There also are seasonal tables that deal with something topical.”

It could be tailgating, spring, Thanksgiving—whatever the season or event. Products around the theme are offered there like towels, tableware and more.

“Let’s face it, there’s a big difference in men and women,” Reasor said. “The girls, they are buying aprons. They’re buying rugs,” Reasor said. “You mention it to the men, and they go, ‘what?’ They don’t see it. But the ladies, their eye is different, fortunately for us. We’re trying to develop a little more of a lineal relationship with whoever’s doing the cooking and the planning.”

Reasor said he believes the chain’s 19 stores are meeting most of the needs of the consumer right now with their bistros or cafes (depending on the location); big produce, dairy and frozen departments; self-service meat and aged beef offerings; pharmacies and large health and beauty spaces. As their needs evolve, Reasor’s will be in step with them.

“Neighborhoods will change. Towns grow in different directions, so we’re constantly evaluating,” Reasor said. “About the time you think you have it figured out, something else will come rolling down the road. We’re just going to keep pushing ahead.”

Shipt To Deliver From Tulsa-Area Reasor’s