The Food Marketing Institute (FMI) has named its 10 Store Manager Awards finalists, four of whom will be named winners of the 2018 award at FMI’s Future Leaders eXperience, scheduled for May 15-17 at the Omni Louisville Hotel in Louisville, Kentucky.

The public can vote for their favorite nominee the week of April 23 on Facebook for the third annual People’s Pick Award.

Following is information about the Northeast finalists; an FMI post about all the nominees can be found here:

Meyers started with Perlmutter Family ShopRites in 1978 as a part-time cart attendant. He has worked at the Manahawkin ShopRite store since 2003. That stick-to-it-itiveness in his nature has led to success in a region that has experienced tremendous residential growth over the last 15 years. When Meyers was first transferred to the store, it was the only grocery in town. Today, it has many competitors.

Sweigert rose to the challenge a couple of years ago when she took over leadership of the Giant Food store near the Pennsylvania State University campus in State College. One year into Kathy Sweigert’s leadership, profitability grew from a negative 0.26 percent to a positive 1.67 percent. After 18 months, profitability was up to 3.02 percent and total store sales had increased 8.05 percent.

What’s the secret to Heffner’s success? Simple execution, he says: Getting the right things done the right

way every single day. Four years ago, Heffner’s Weis Markets store in Mountain Top, Pennsylvania, averaged $250,000 in weekly sales. Today, that figure has doubled, and the store was named the 2018 Weis Markets Store of the Year Grand Champion. 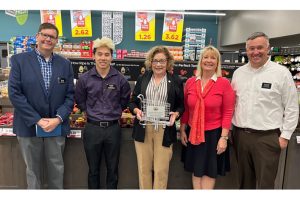 Grocers Gather In D.C. To Advocate For The Supermarket Industry
Giant-Carlisle To Expand Store Network Across Pennsylvania