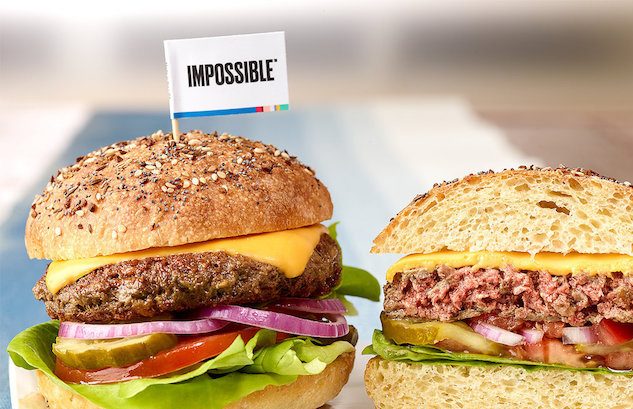 “Getting kosher certification is an important milestone,” said Impossible Foods CEO and Founder Dr. Patrick O. Brown. “We want the Impossible Burger to be ubiquitous, and that means it must be affordable and accessible to everyone—including people who have food restrictions for religious reasons.”

Impossible Foods is in the process of getting Halal certification later this year.

Earlier this year, a Rabbinic Field Representative toured the Impossible Foods’ 67,000-s.f. manufacturing facility in Oakland, California, which produces 500,000 pounds of plant-based meat per month. The rabbi confirmed that all ingredients, processes and equipment used to make the Impossible Burger are compliant with kosher law, derived from the Torah’s Books of Leviticus and Deuteronomy.

Jewish dietary laws (known as “kashrut”) prohibit the consumption of pigs, shellfish and most insects, and they specify certain slaughterhouse processes. In addition, dairy and meat products may not be prepared or eaten together.

The Impossible Burger is produced without slaughterhouses, hormones or antibiotics. It contains no cholesterol or artificial flavors. It uses about 75 percent less water, generates about 87 percent fewer greenhouse gases and requires around 95 percent less land than conventional ground beef from cows, the company says.

One special ingredient—heme—contributes to the characteristic taste of meat and is the essential catalyst for all the other flavors when meat is cooked. Heme is an essential molecular building block of life, one of nature’s most ubiquitous molecules. Although it’s found in all living things and in virtually all foods, it’s especially abundant in animal tissues. Impossible scientists discovered that it’s the abundance of heme in animal tissues that makes meat taste like meat.

To satisfy the global demand for meat at a fraction of the environmental impact, Impossible Foods developed a more sustainable, scalable and affordable way to make heme, and therefore meat, without the environmental impact of livestock. The company genetically engineers and ferments yeast to produce a heme protein naturally found in plants, called soy leghemoglobin.

The heme in the Impossible Burger is identical to the essential heme humans have been consuming for hundreds of thousands of years in meat.

“I’m really excited to be able to announce that the Impossible Burger is now kosher. And because our meat is purely plant-based, for the first time we can all enjoy a delicious—and strictly kosher—cheeseburger,” said Impossible Foods’ Chief Science Officer Dr. David Lipman.

The son and grandson of kosher butchers and cattle brokers, Lipman worked in the family business, Lipman’s Kosher Market, starting at the age of 7. His grandfather, Morris Lipman, co-founded the business in 1930 in Rochester, New York.

The Impossible Burger now is served in more than 1,600 restaurants in the U.S. and in Hong Kong. With demand outstripping supply, Impossible Foods is hiring for a second shift at its Oakland facility and plans to double capacity this summer.

In development since 2011, the Impossible Burger debuted in July 2016 at Chef David Chang’s Momofuku Nishi in Manhattan. The Impossible Burger is the only plant-based burger to win a 2017 Tasty Award and a 2018 Fabi Award from the National Restaurant Association.

In April, White Castle added the Impossible Slider to menus in 140 restaurants nationwide. The Impossible Burger is the only plant-based burger featured in America’s “better burger” concepts Fatburger, Umami Burger, Hopdoddy, The Counter, and B Spot, a Midwest burger restaurant owned by Chef Michael Symon.