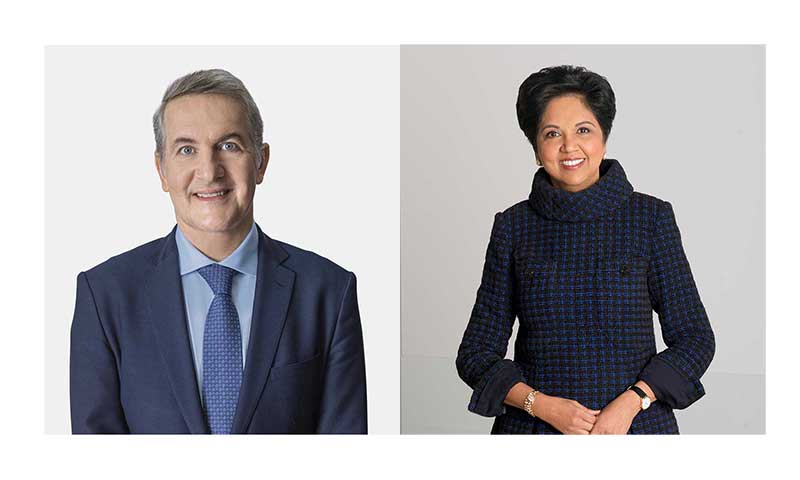 “Leading PepsiCo has truly been the honor of my lifetime, and I’m incredibly proud of all we have done over the past 12 years to advance the interests not only of shareholders, but all our stakeholders in the communities we serve,” said Nooyi. “Growing up in India, I never imagined I’d have the opportunity to lead such an extraordinary company. Guided by our philosophy of ‘Performance with Purpose’—delivering sustained performance while making more nutritious products, limiting our environmental footprint and lifting up all the communities we serve—we’ve made a more meaningful impact in people’s lives than I ever dreamed possible. PepsiCo today is in a strong position for continued growth with its brightest days still ahead.”

Speaking on behalf of PepsiCo’s board, presiding Director Ian Cook said, “As Chairman and CEO, Indra has provided outstanding leadership over the past 12 years, serving as a model both within our industry and beyond for responsible corporate stewardship in the 21st century. She has delivered strong and consistent financial performance, managing with an eye toward not only the short-run, but the long-run as well…

“Indra has also, selflessly, served as a mentor for associates up and down the organization, building close relationships with leaders in every one of PepsiCo’s key markets, championing diversity and adhering to the highest standards of corporate ethics, earning PepsiCo a place on Ethisphere’s list of the World’s Most Ethical Companies every year since the list was established 12 years ago.

“Thanks to her leadership, PepsiCo is well positioned for ongoing success as Ramon assumes this new role. He is a seasoned leader with deep experience in international markets, and the board is confident that he is the right person to usher in this next chapter of growth for PepsiCo.”

Laguarta will become the sixth CEO in PepsiCo’s 53-year history. All have been appointed from within the organization.

“I’m incredibly humbled and privileged to be appointed the next CEO of PepsiCo, and I want to thank the board of directors for the confidence they have placed in me with their decision,” said Laguarta. “I also want to thank Indra for her overwhelming support. She has transformed the company with her bold vision and outstanding leadership, and I feel fortunate to have her as a mentor and a friend. And of course, I want to thank all of my colleagues, as well as the customers, bottlers, partners, and investors who are part of the PepsiCo family. I look forward to working more closely with all of you in the months and years ahead, and to continue growing this special company long into the future.”

“Ramon Laguarta is exactly the right person to build on our success,” said Nooyi. “He is a terrific executive with a long and proven track record of growing businesses. He has a deep understanding of the changing preferences of consumers and other critical trends unfolding around the world, and he has demonstrated that he knows how to navigate them successfully. Ramon has been a critical partner in running the company, and I’m confident he will take PepsiCo to new and greater heights in the years to come.”

Laguarta has held a number of executive and general management roles in his 22 years at PepsiCo. Since September 2017, Laguarta has served as president of PepsiCo, overseeing global operations, corporate strategy, public policy and government affairs. Previously, Laguarta served as CEO, Europe Sub-Saharan Africa, one of PepsiCo’s most complex businesses with operations spanning three continents and comprised of developed, developing and emerging markets. Prior to that, he served as president, PepsiCo Eastern Europe region and served in a variety of sales, marketing and other commercial roles across Europe.

Prior to PepsiCo, Laguarta worked for Chupa Chups S.A., a confectionery company based in Spain, where he held a number of international roles in Europe and the U.S. Laguarta holds an MBA from ESADE Business School in Spain and a master’s in international management from Thunderbird School of Global Management in the U.S. A Barcelona native, he speaks multiple languages, including English, Spanish, French, German and Greek.

“Ramon is a strong and proven executive with an outstanding track record growing organically and by acquisition some of PepsiCo’s largest and most important international businesses,” said Daniel Vasella, Chairman of the Board’s Nominating and Corporate Governance Committee. “He keenly understands the evolving needs of consumers and customers and the trends affecting our business in markets around the world.”

With Nooyi’s departure, the rest of PepsiCo’s senior leadership team will remain unchanged.

Study: Online Grocery Is The Supermarket’s Business To Lose
Reports Of A Retail Apocalypse Have Been Greatly Exaggerated