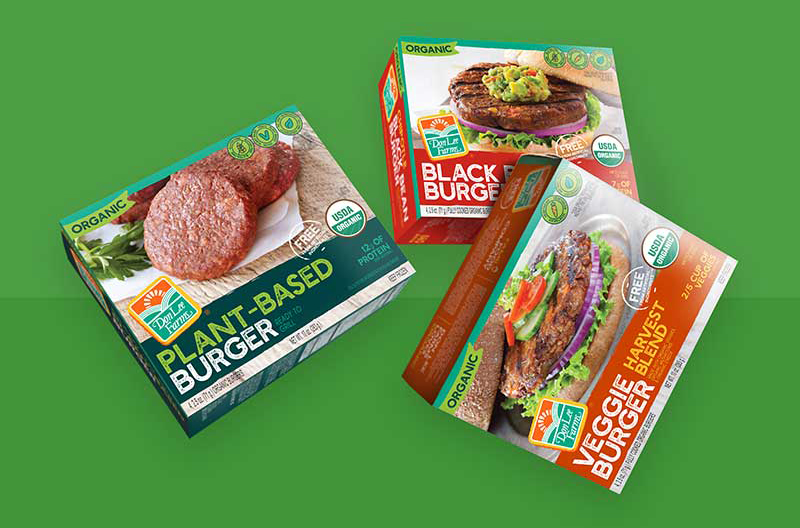 Don Lee Farms is rolling out its Organic Plant-Based Burger, Organic Harvest Blend Veggie Burger and Organic Chipotle Black Bean Burger to Publix stores. The burgers will be sold in the frozen section.

Donald Goodman, president of Don Lee Farms, said, “We have been working with large national retailers to expand our reach into markets closer to where our customers want us. With the addition of Publix, we are bringing our popular organic burgers to over a thousand locations in the Southeast. We are excited to announce that we are now in over 5,000 retail markets.”

The Chipotle Black Bean Burger is made with a blend of organic ingredients: black beans, sweet corn, tomatoes and onions. The burgers are seasoned with organic chipotle peppers and organic spices for a Tex-Mex flavor.

Both burgers are all-natural, vegetarian, GMO-free and completely free from artificial flavors and preservatives.

The Plant-Based Burger, made with a handful of organic plant-based ingredients, sizzles on the grill just like raw beef, says Don Lee. The burger is organic, vegan, gluten-free and an excellent source of plant-based protein.

The organic burgers will be available in Publix in March and are currently available at Costco, Wegmans, HEB, Stater Bros, Tops, Stop & Shop and markets across the U.S.

Don Lee, a family-owned food company, recently announced a global expansion into 15 countries in Europe, South America and the Caribbean.

In other Publix news, the retailer once again has been named one of the World’s Most Admired Companies by Fortune, ranking No. 2 in the food and drug stores industry category.

The list of the World’s Most Admired Companies is determined based on ratings calculated from thousands of businesspeople within each industry. Survey respondents are asked to rate companies in their own industry on nine criteria, from investment value to social responsibility.