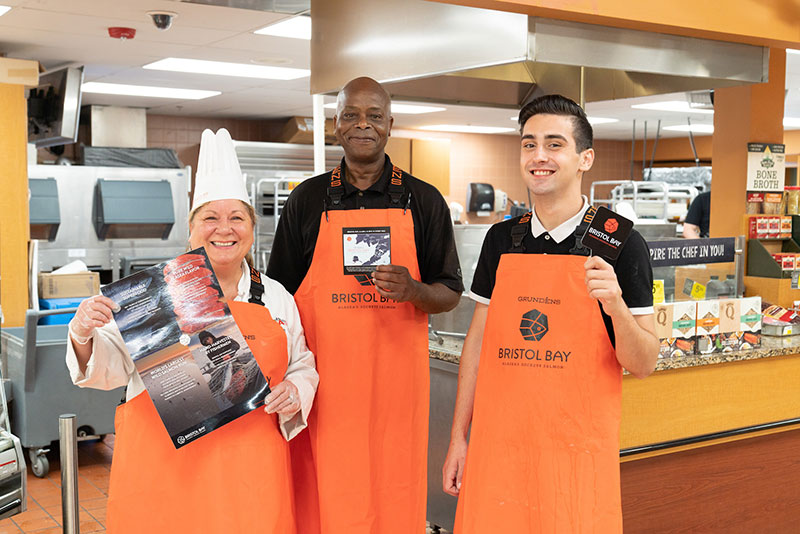 The Bristol Bay Sockeye Salmon run set a record in 2018, and retailers across the country participated in promoting it.

The salmon branding program first was developed by the Bristol Bay Regional Seafood Development Association (BBRSDA) in 2016 in Boulder, Colorado, before being launched nationwide in 2017. In 2018, the salmon was promoted in more than 1,000 stores.

The marketing program theme is “Wild Taste from an Amazing Place.” Digital assets, point-of-sale materials and promotional support highlight Bristol Bay Sockeye Salmon’s red flesh and great taste, against a backdrop of stunning vistas and the Alaskan fishermen who bring in the harvest each year, according to BBRSDA.

Pavilions stores in Southern California promoted Bristol Bay Sockeye Salmon during October, National Seafood Month, to great success, BBRSDA reported, with sales posting an 81 percent increase over refreshed sockeye sales for the same period in 2017. Bristol Bay Sockeye Salmon transaction counts (within the service seafood category) represented 3 percent of the overall service seafood transaction for the month, which is significant for a new item that was introduced while fresh salmon was still an available option to the consumer, according to the association. This was part of a tie-in promotion with Alaska Seafood Marketing Institute, promoting a dedicated Alaska section of the seafood case during October.

“I am extremely pleased with the Alaska/Bristol Bay promotion results,” said Mark Angulo, Pavilions meat and seafood sales manager. “Adding store excitement while educating consumers is a win-win situation. We received support in preparing and executing associate training, point-of-sale materials and consumer handouts. We could not ask for a better partnership.”

“Our stores loved the promotion. Bristol Bay has a very strong brand that messages really well with our clientele, who are more tapped into social responsibility and sustainability than ever before. Bristol Bay has beautiful point-of-sale and branding that aligns with those sensibilities,” said Josh Dooley, QFC meat and seafood manager. All 63 QFC stores promoted Bristol Bay Sockeye Salmon both during the summer fresh season and in November.

“We were very pleased with the results of our partnership with Bristol Bay Sockeye Salmon, both during the December event and over the past several months,” said Jason Pride, VP of meat and seafood for Hy-Vee. “Hy-Vee is committed to making sure that our customers always have access to the freshest seafood which is brought to them through sustainable methods, and this promotion helped that message get to even more of our customers.”

Many retail promotions for Bristol Bay Sockeye Salmon are planned for 2019, but BBRSDA is actively recruiting new retail and foodservice partners. Interested partners can contact BBRSDA at [email protected] to set up a meeting; BBRSDA also will be exhibiting at the Seafood Expo North America in Boston, March 18-20, at booth #3450.