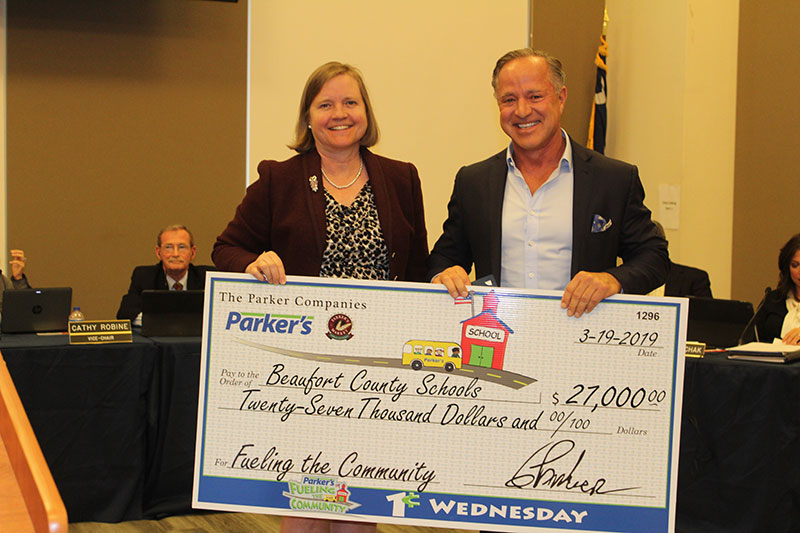 The Fueling the Community program donates one cent of every gallon of gas sold on the first Wednesday of each month at Parker’s convenience stores to local schools.

A portion of the Parker’s donation funds the school district’s annual Support Person of the Year recognition program honoring school nurses, social workers, bookkeepers, office managers, teacher assistants, school secretaries, and technology and data specialists. Other funds go to specific schools designated by Parker’s PumpPal customers when they purchase their gasoline on the first Wednesday of each month.

“At Parker’s, we’re committed to giving back to the Beaufort County community and supporting local schools through our Fueling the Community program,” said Parker’s founder and CEO Greg Parker. “We know education has the power to transform lives, reduce crime and expand opportunities. We’re grateful to all the Beaufort County School District teachers, administrators and staff who work hard every day to support student success in the classroom.”

Parker’s is one of the nation’s leading foodservice and convenience store companies. The company launched its charitable initiative in 2011 and has donated money to public and private schools in every community where Parker’s does business.

“This generosity we see from Parker’s every year is really impressive,” Gwozoz said. “Over the past five years, they have donated nearly $100,000 to district schools, and that’s a solid investment in our kids.”

Founded in 1976, Parker’s mobile app and PumpPal program has saved customers more than $10 million since its inception. Parker’s has been ranked on Inc.’s elite list of the top 5,000 fastest-growing private companies in the U.S. for four consecutive years.

Savannah, Georgia-based Parker’s has 54 stores in Georgia and South Carolina.