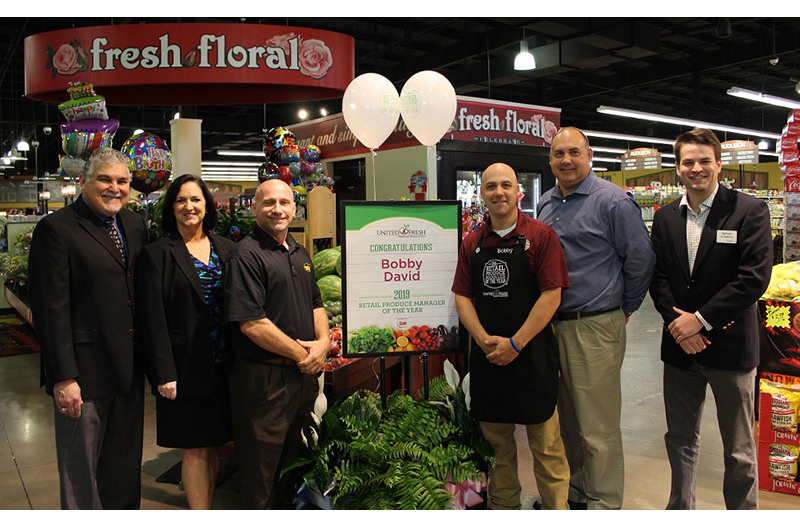 United Fresh Produce Association has named Bobby David from Audobon Market Grocery as one of its 25 Produce Managers of the Year for 2019.

Representatives from United Fresh and Dole visited Audubon Market in St. Francisville, Louisiana, to present David with his award.

David has been in the grocery business for 23 years. He spent 18 years with Audobon Market as assistant manager. Over the last three years, David has worked within the produce department.

“It’s my whole team that makes this happen. My goal for the department is to keep it clean, neat and shopper-friendly,” David said. “I do what I do well, because of the great team I have around me. I am honored to be recognized for that.”

David is one of 25 honorees for the United Fresh Produce Association 2019 Retail Produce Manager Awards Program.

Sponsored by Dole Food Co., based in Westlake Village, California, the program recognizes produce managers who work daily to increase sales and consumption of fresh fruits and vegetables. In its 15th year, more than  325 retail produce managers, representing more than 110 different retail banners, have been honored for their contributions to the industry.

The winners will be honored guests at the United Fresh 2019 convention, June 10-12 in Chicago.  In addition to their awards, five Grand Prize recipients each will receive a $1,000 cash prize.

The winners were selected from hundreds of nominations submitted by retailers and produce suppliers across the industry. Nominations were evaluated on several criteria, including efforts to increase produce consumption through excellence in merchandising, special displays and promotions, community service and commitment to customer satisfaction.