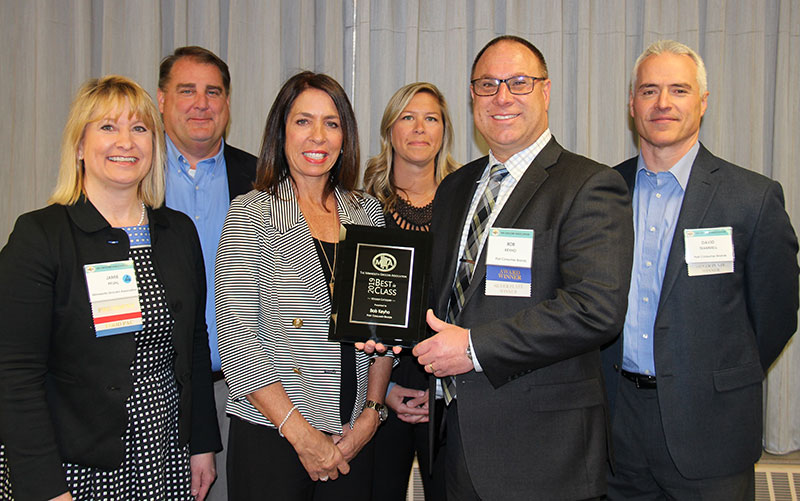 The Minnesota Grocers Association (MGA) presented the 2019 MGA Best in Class Award and several other awards at the MGA Industry Connects Luncheon, held Tuesday, April 16, at the DoubleTree in Bloomington. MGA says the event “showcases the depth of participation, from farm to fork, across the entire state.” More than 200 industry members attended.

The MGA Best in Class Award, presented at the luncheon, acknowledges the best of the best in Minnesota’s food industry. Based on his performance in 2018, recipient Bob Keyho of Post Consumer Brands in Lakeville has gone above and beyond in his leadership achieving results for his company and their customers, according to MGA.

MGA President Jamie Pfuhl and Board Chair Kris Kowalski Christiansen of Kowalski Cos. Inc. presented Keyho with the award.

“The MGA is so proud to recognize the dedication and achievements of those whose day to day efforts are laying the foundation for a vibrant and thriving industry,” said Pfuhl. “Bob is an industry veteran who is an advocate for the independent Minnesota retailers he serves. His passion, hard work and commitment exemplify what makes this industry truly great.”

Also at the luncheon, the Minnesota Department of Agriculture’s Minnesota Grown program announced the winners of its annual Retailer of the Year contest. Commissioner Thom Petersen presented the awards.

Pfuhl said of the Industry Connects Luncheon, “We are so proud to have the diverse community of the food industry in one room. It’s great to acknowledge and celebrate our peers. Together we learn to be the best we can be for the communities we serve and the entire state of Minnesota.”