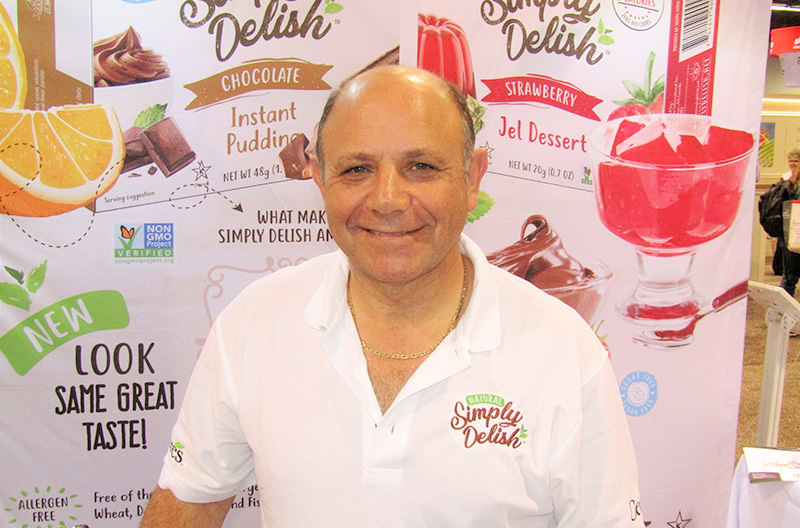 Stanmar International, based in Canada with its U.S. headquarters in San Diego, presented several products it wants to market in the U.S. at Natural Products Expo West, held March 6-9 in Anaheim, California.

One of those products is the Simply Delish line of vegan, non-GMO gelatins and puddings.

“We were introduced to this particular group in South Africa who were producing a sugar free Jell-O, or we call it a jel dessert because Jell-O is registered in the U.S., and we had to come up with something which was vegan, all natural and had something that would work along the way,” said Martin Pamensky, executive director of international operations for Stanmar International. “It took us probably about a year and a half to get a non-GMO certification.”

Stanmar International also used the expo to show off its new packaging design to coincide with distribution of its products in a growing number of national grocery store chains.

“If you look at our old packaging it was probably 1920 design, and today we have refreshed everything. Now we’ve got our brand-new looking packaging, which is designed from picking a new logo design, new package design, because we are now listed in a number of supermarket chains,” Pamensky said. “We’ve got our product into all the natural food stores and with the new branding and the new launching, we are just having incredible response to our product.”

As of the date of the Natural Foods Expo West, Simply Delish was available in Jewel, Kroger, Whole Foods, Sprouts, Fareway and natural food stores nationwide. It’s been available internationally and on Amazon.com for some time.

“We’ve got a phenomenal business from Amazon we get every month,” Pamensky said. “And our product just keeps growing and growing. And we are now in Canada, South Africa, Australia,and in Europe with our product.”

The gelatin product is a powder that does not require refrigeration. Pamensky said what makes Simply Delish’s product different is it is the only product on their dessert side that can be mixed with non-dairy products.

“All the other products have gelatin, and with gelatin you cannot mix it with non-dairy products like coconut milk, soy milk. So our product is non-dairy, sugar free, kosher,” he said.

The Simply Delish product uses stevia as a natural sweetener as well.

The company expects conventional grocery stores will carry the gelatin product. Some may stock it in the baking aisle while others may place it with natural foods or with other gelatin products.

Paminsky said the company is in the process now for food service. “We have a model, an opportunity now to launch a product at retail which is a Knox equivalent where you can actually take their product as a gelatin and use it for baking and cooking as well,” he said. “So, that’s what people do with our product.”

Simply Delish’s gelatin product typically retails from $2.79 to $2.99. Some stores offer two for $5.

Stanmar International also produces Ceres Juices, named after Ceres, the Greek goddess of plenty. The juices were introduced in the United States six months ago. Pamensky said they’ve used aseptic technology, which sterilizes packaging prior to filling, to allow eight months of shelf life for the juice without refrigeration.

“That’s a game changer for everybody,” he said. “In the juice industry, in the soy industry and wherever across the board. We can get the shelf life to the product,” he said.

Pamensky said the company is using the shelf-stability of the juice in its merchandising. He said they originally wanted to be in the produce department but found there was limited space and they would be up against “some major players in that industry—Naked Juice, Coke—and to buy that space is just crazy. So we found a better position.”

That position is in the juice section, where no one else offers their exotic flavors, he said.

Stanmar International’s non-GMO, sugar free, gluten free and vegan salted edamame product through its On the Go brand has been available online but the company is now taking it to retail offering.

“Edamame is mostly coming out of China so we found a local grower in South Africa. These were people who were a Christian organization that developed this whole business of growing edamame,  and we started growing edamame in South Africa. We salted them and then added them with fruits from South Africa, the pineapples, the raisins, and with this whole new thing of having the salted with fruits has become the new way,” he said.

The edamame is mixed with fruits such as strawberries, cherry and cranberries. Pamensky said Stanmar International is among the first to do so.

“There are guys who brought product which has edamame in the market—salted edamame—and there are one or two players that do a fairly good job with the product, but nobody has designed an exotic range like this,” he said.