Home » Next Generation Takes Over At Alliance Sales & Marketing Of Alabama 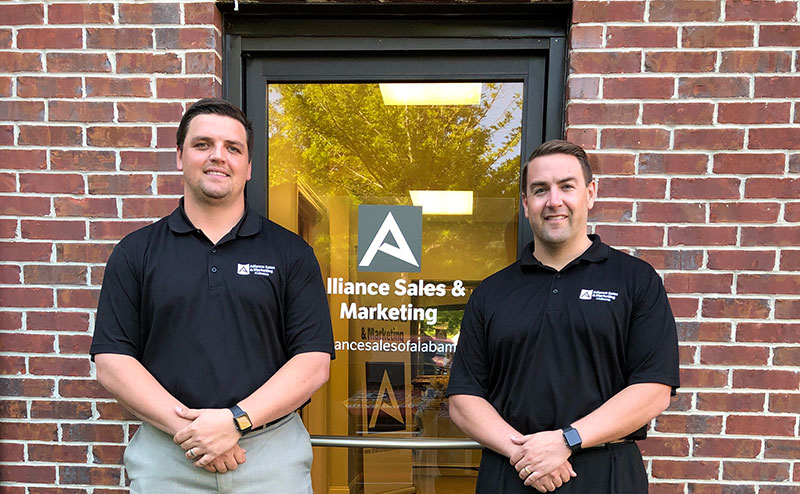 To suggest that July 2018 was a bad month for the Tinney family of Birmingham, Alabama, is an understatement.

The patriarch of the family, Doug Tinney, died unexpectedly, leaving his wife and four adult children to manage Tinney’s business, Alliance Sales & Marketing of Alabama. They quickly realized that Alliance was a true “old school” food brokerage, one formed on a lot of “handshake” agreements with suppliers and personal relationships with hundreds of retail grocers. The one thing the organization lacked was technology and processes to support the operation.

Two of Doug’s sons, Brad and Matt, joined their mother to save Doug’s four-decade legacy, which had humble beginnings.

Doug Tinney left Philips Brokerage with only one account—Tropicana—to launch his own agency. This food brokerage—which started as Tinney Food Brokers—grew into an agency that at its peak employed 80 people.

The business, now known as Alliance Sales & Marketing of Alabama, would need a new commitment to technology to thrive in today’s market, the brothers acknowledged when they took over the business.

“After his passing, my brother and I saw an opportunity to honor our Dad, so we left our careers and took over the reins of the family business. We immediately saw some areas where technology could be implemented to automate workflows, increase sales and improve retail execution,” said Brad Tinney, who previously worked as a petroleum engineer, although he did spend plenty of time with Doug in the stores while in high school and college.

“You have to understand, my Dad was very old school, and rarely used a computer,” Brad said. “He had a system, and it worked very well for him. But we knew moving forward we had to invest in technology to remain competitive.”

Doug Tinney had built Alliance Sales & Marketing of Alabama through his relationships with wholesale grocers in Alabama, Florida, Georgia, Mississippi and Tennessee, and always specialized in the independent sector. However, in the Southeast market, most of the more than 750 grocery stores the company’s representatives call upon operate without planograms. Thus, hands-on retail execution is crucial to the success of the business. The sons knew this was also where they needed to start the agency’s reinvention.

The biggest challenge facing the family was that the company was operating with very outdated technology. Most tasks were done on paper, and there wasn’t a platform that could generate the reports and others information needed to run a 21st-century business. These decades-old computers were used predominately for emails, and retail distribution statistics at the store level was not much more than paper reports—and these weren’t even compiled within a central database.

These factors prompted Brad and his brother Matt, who transitioned away from a job in manufacturing tool sales, to invest in new technology systems and create new processes that would help the company compete effectively in today’s crowded marketplace. They needed to take all the price lists, spec sheets, account codes and store lists recorded on different sheets of paper and code all of the data within a new computer.

Information sharing a vital piece of the puzzle

On the business side, the brothers wanted to become indispensable to both retailers and suppliers, and that meant getting visibility to the shelf—information that could be quickly shared with business partners so they could see what was and what wasn’t working. They also needed to help their trading partners address the challenge of out-of-stocks, an issue that again required greater visibility to the shelf.

Eager to upgrade from the paper system, Alliance worked with software provider RW3 to achieve both its technology and business process goals.

The first step was to equip all sales reps with the latest Apple iPads loaded with RW3’s Smartcall field sales application, which is designed to close retail distribution voids and monitor merchandising. All data is now compiled into a single SQL database, which drives a range of mobile applications to enable targeted, rapid response to on shelf availability issues and display execution.

This configuration supports easy analysis and rapid reporting to the company’s principals, who now have access to all necessary data and transparent visibility into the market. Using the input from that team and the experts at RW3, the company created a test environment that allowed the reps to try it in the stores and then customize it based on feedback.

The time between signing the contract with RW3 and handing the retail reps their iPads was  just two weeks, with all systems ready to go on Feb. 1, 2019.

While the company continues tweak the system and Brad and Matt believe it will always be a work in progress, they are very impressed with what they now have in place. However, anytime there is change, there are also challenges. In addition to dealing with the death of their father and new management at the company, the Tinney brothers also had to convince the manufacturers that they had a workable plan.

“Our biggest challenge was time, because we wanted to have the technology ready to go at the first of the year,” Brad says. “On the reporting side, we had to build a database and visualizations for data analytics. We turned all of this around with a few sleepless days, but the end result is fantastic. Fortunately, RW3 also put in the extra hours to help us launch our new system.”

Since deploying the new system, Alliance says it has increased product line distribution by average of 40 percent (some suppliers are up more than 50 percent), added five new manufacturers and expanded coverage from 500 stores to 750. The agency’s reps are also currently are calling on about 120 stores per week, which continues to increase.

“I’ve interviewed multiple brokers/sales and marketing teams to help me cover Alabama, Louisiana, northern Florida and southern Georgia for my McCormick branded protein line. After leaving my meeting with Alliance in December 2018, I was quite confident that this group had all the connections and technology in place to help me expand and cover the region where I once had a void,” said Richard Cresswell, president of Red Truck Beef Jerky. “The last four months were very evident that I made the correct choice. Alliance has created more business for me faster in this region than any other team I have in the U.S. Their attention to detail and level of excitement towards my product line including a strong ground game has helped me achieve the goals that I needed faster than I thought possible.”

“The team from Alliance has always supported our store like it was their own,” said Kamal Constantine, owner of a Piggly Wiggly in Mobile, Alabama. “With the reps now using iPads, they are bringing us several new marketing and merchandising capabilities that are making the store more competitive.”

“We are excited where the company is at today, but we are just getting started. We are a long way from our internal goal, but I am very excited with the pace of our progress,” Brad says. “We are looking into adding more stores to our coverage and evaluating several new lines. We are here for the long haul, and we will continue to grow the business.”