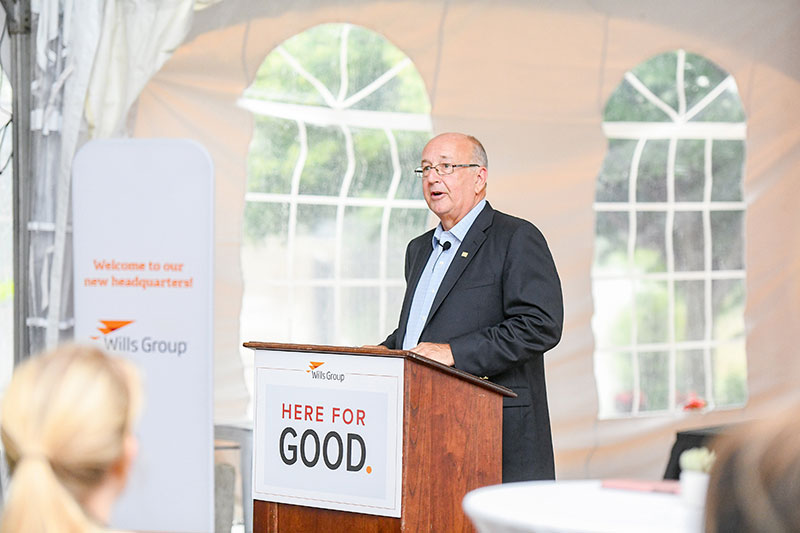 The 45,000-s.f. building was fully renovated to support the company’s commitment to expansion in the Mid-Atlantic region for its businesses, which also include Splash In ECO Car Washes and SMO Motor Fuels.

“Since 1926, The Wills Group has called southern Maryland home, occupying the space at our former headquarters on Crain Highway for nearly 60 years,” said Lock Wills, chairman, CEO and president of The Wills Group. “This new building serves as a solid foundation for the next chapter in our 93-year success story, fueling our growth for years to come.”

At the event, the company announced a $150,000 grant to LifeStyles of Southern Maryland, paying off the mortgage of the newest endeavor, Southern Crossing. A non-profit that provides emergency assistance to people in crisis, LifeStyles is rehabilitating a former motel to provide affordable, transitional housing and programs for low- to moderate-income households.

The Wills Group has donated nearly $3 million to communities across the Mid-Atlantic region over the past 10 years.

In addition to the grant to LifeStyles, Southern Maryland Food Bank, Farming4Hunger, Charles County Children’s Aid Society, Our Place Waldorf and the Arnold House each received a $2,500 grant from the company.

The Wills Group has nearly 300 retail locations across the Mid-Atlantic region, including Dash In, Splash In ECO Car Washes and SMO Motor Fuels. The company has been family owned since 1926 with expertise in convenience retailing, fuels marketing and commercial real estate.