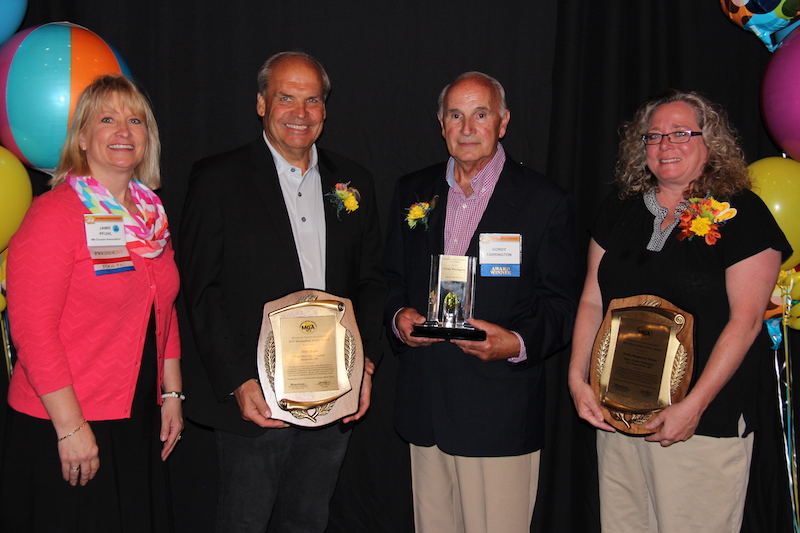 The Minnesota Grocers Association (MGA) has a longstanding tradition of honoring the best in the food business by annually presenting awards to those who demonstrate excellence, have made significant contributions to the industry and are highly respected by their peers. The association says this year’s award winners are a testament to the vitality of the grocery industry in Minnesota.

The awards were presented by MGA Board Chair Kris Kowalski Christiansen and MGA President Jamie Pfuhl on July 28 at the association’s annual conference in Brainerd, Minnesota. It is the state’s premier event for the food industry, showcasing the pride and accomplishments of those who operate in Minnesota, and it was attended by more than 350 people.

The 2019 Outstanding Grocer award was presented to Kristi Magnuson Nelson, president and CEO of Hugo’s Family Marketplace/Valley Markets. Hugo’s operates 10 supermarkets, five liquor stores, seven Caribou Coffee shops and three pharmacies in North Dakota and Minnesota. The award is presented annually to a grocer who has successfully grown a company and demonstrates contributions to the industry in the areas of government affairs and community service as well as MGA involvement.

MGA says Magnuson Nelson has created a thriving business by meeting the changing needs of the communities where Hugo’s operates and has been an active supporter of the association. In addition, the association says her entrepreneurial spirit exemplifies what it means to be a grocer.

Mike Hajlo, director of retail sales, PepsiCo Beverages North America in Burnsville, Minnesota, was honored by MGA with the 2019 Outstanding Vendor award. This award is given to those who show innovation in customer support and excellence in customer service as well as involvement with MGA. Hajlo has been with PepsiCo Beverages North America for 42 years. He started his career as a driver, moving through the ranks of the company to now overseeing six states as director of retail. He is a leader and mentor within his company and serves on the MGA board of directors.

Gordy Farrington, retired president of Cub Foods, was inducted into the MGA Hall of Fame in recognition of his service and exemplary contributions to the state’s food industry. Farrington has earned respect and admiration for a lifetime of commitment to the food industry. The association says his leadership, industry service and vision made his induction to the MGA Hall of Fame a well-deserved acknowledgement.

MGA is the only state trade association that represents the Minnesota food industry from farm to fork. It is one of the oldest trade associations in the state, celebrating more than 120 years of advancing the industry.

The association actively advances the common interest of all those engaged in any aspect of the retail food industry as a leader and advocate in government affairs.