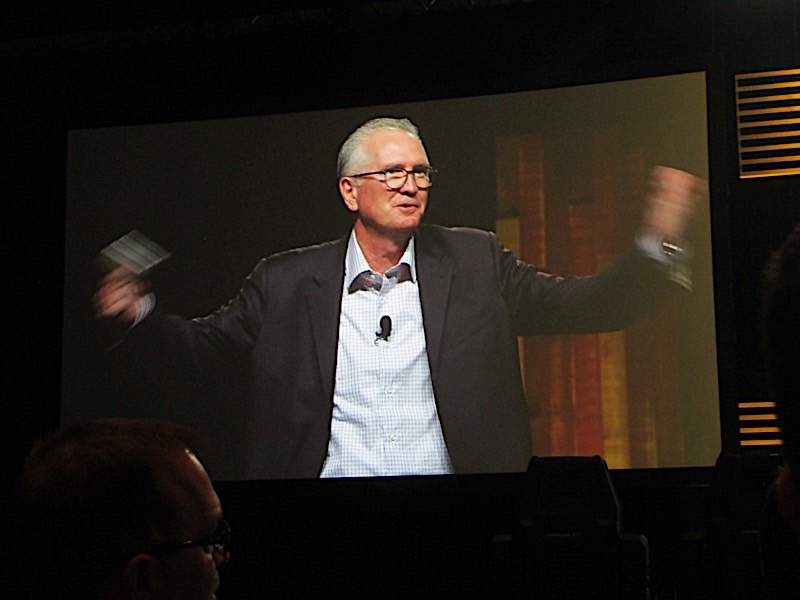 UNFI became interested in Supervalu for one central reason: scale. That drove the decision to acquire it, according to Sean Griffin, UNFI’s chief operating officer.

“The benefits of scale ultimately is what this is all about,” Griffin told attendees at the UNFI National Expo in St. Paul, Minnesota. “We’re creating a company that will bring scale so that we can compete and win in every department in the retail store, whether we’re talking perishable, center store, general merchandise. And to win means it’s a win for both our company and our customer. Bringing that scale to work, putting that scale to work to compete and to win for all stakeholders—that’s our mission.”

He said that whatever the initial assumptions and expectations were about the acquisition, the opportunities presented by the UNFI/Supervalu marriage exceeds them. He said that though it has been year since the acquisition, “we are just now beginning to realize what our company can be.”

The leadership team’s intentions are sometimes greater than their execution, but “we are making great progress. I promise you that,” Griffin said.

He acknowledged the difficulties that can arise during transformations like the one underway with UNFI and the former Supervalu.

“When you’re a parent, you’re only as happy as your least happy child,” he said. “We know that we’re measured by our least successful transaction, our least performing—from a service perspective—distribution center. We know that. We work hard at it.”

Griffin said success can only be measured by the positive impact UNFI makes on the independent grocer’s business. He said the leadership team’s job during the expo was “to listen to you, to hear you, to evolve with you. We want to get it right and we will get it right.”

The company has opened a 200,000-s.f. freezer in Harrisburg, Pennsylvania, that gives UNFI the ability to bring in new products and expose retailers to innovation and emerging brands.

A new distribution center in Centralia, Washington, had only been open for 10 days when Griffin spoke at the expo in late July, and it still had a “couple of bugs.”

“But this is a 1.2 million-s.f. distribution center that unlocks all kinds of opportunity to bring in natural, better-for-you, conventional—and really expand our footprint in the Pacific Northwest,” he said.

UNFI now has an organizational structure built around four regions, each with its own president. Griffin said each president is a “a decision-maker, a P&L owner—where the buck stops.

“We’re a big company. We know that,” he said. “There’s $23 billion in wholesale, many thousands of customers and we really needed to create an environment and organizational structure where having a local face of our company is critical.”

“It’s our largest region now because it has legacy Unified Grocers, legacy Market Centre, it has Tony’s Fine Foods, it has Supervalu, it has UNFI,” Testa said.

Tandy Harvey now is president of the Central Region. She has spent her entire career at Supervalu. She most recently was VP of sales on the West Coast.

Many customers in the Central Region had been buying from both UNFI and Supervalu. Harvey’s challenge will be to leverage that, Testa said.

“She has an incredible background,” Griffin said. “She is bringing a great deal of energy and can-do to her job. We’re thrilled to have Tandy in the Central Region as president.”

The South Region president is JJ Cantrell. He spent many years in the company’s branded business with Blue Marble Brands and most recently was in charge of sales in the Atlantic Region.

Testa said Cantrell’s region goes “from Florida to Atlanta to Texas up to Denver.”

Cantrell also has the legacy Associated Grocers business under him.

“I really have enjoyed seeing the growth that JJ has embodied, and he’s going to hit it out of the park in the South Region,” Griffin said.

Mark Bushway is president of UNFI’s Atlantic Region. He spent his entire career in wholesale, mostly on the operations side.

“When you’re talking to Mark Bushway about opportunities around service or logistics, he’s going to have the answers,” Griffin said. “You’re going to enjoy working with him and getting to know him.”

Testa pointed out during his address on July 30 that the company’s fiscal year would start on Aug. 4, but he said the new year symbolically started with the expo.

“This has been a lot of work over the last nine months to bring it together,” Testa said. “We’ve got a lot of stuff behind us. Yes, we have more to go, but the region structure is what I’m most proud of and that is enabled today.”