The Coleman family has been ranching in Colorado since before it became a state. With its history dating back to 1875, Coleman Natural Foods has been a pioneer in raising livestock without the use of antibiotics or added growth hormones.

The family business held strong for almost a century but, in the late 1970s, when cattle markets were low and interest rates were high, the “banker was knocking at the door,” said Mel Coleman Jr., chairman of the company. He talked to The Shelby Report’s Jan Meade about the company and how “natural” came to be from the meat category to mainstream grocery.

It was in the late 1970s when Coleman’s sister-in-law, Nancy, who was attending the University of Colorado, was visiting with Mel Coleman Sr. and mentioned that shoppers in Boulder were frequenting natural foods stores but could never find beef raised without antibiotics or growth hormones.

“To hear Dad tell the story, he said it was like the hair on his arms stood straight up,” Coleman said.

With more natural foods in demand, there was an opportunity. The family established Coleman Natural Beef. Coleman wanted the natural claim to be present on beef at the retail level.

A USDA inspector told him that special claims required protocols and USDA labeling.Coleman went to the regional USDA office thinking approval would take a day or two. It became an odyssey that lasted more than a year, with numerous trips to the USDA offices in Washington, D.C.

“After a long, arduous process, the USDA granted Dad the first ‘natural’ label, which defined how livestock is raised from birth with no antibiotics, growth hormones and on a vegetarian diet,” Coleman said.

Less than a year later, the USDA revised the meaning of “natural” to include “this product is minimally processed and contains no artificial ingredients.”

Suddenly, every protein on the planet could be labeled “natural.”

This is where the confusion consumers have about natural labels was born. Unless specifically stated on the label, natural now has nothing to do with how the animal is raised.

What is ‘natural’ anyway?

While more consumers were looking for the option Coleman Natural Beef could offer, the idea was a tough sell to meat directors and buyers, particularly on the East Coast. Coleman was questioned about the “natural” label. If Coleman beef was natural, then what was the other beef? Unnatural? And why introduce a different beef product?

Coleman Jr. had a demonstration he used to shortcut the explanation for natural beef and the demand he saw coming. He put a Coke on the table and then, when asked the question, set a Diet Coke next to it.

“Do you think Coca-Cola would have created Diet Coke if they thought they were going to ruin their regular Coke brand?” he would ask. “No. It is about giving consumers a choice.”

When Coleman Natural Beef first used its “never ever” any antibiotics label, animal rights activists were concerned that sick animals would not be cared for properly.

“We had to explain that not treating a sick animal is inhumane and would be foolish from a business standpoint,” Coleman said. “There’s not a farmer or rancher anywhere that I know that just lets a sick animal be.”

Most consumers 30 or 40 years ago—and many today—don’t realize that antibiotics go into livestock feeds at a sub-therapeutic level to increase feeding efficiency.

“We, and especially my dad, always believed the purpose for antibiotics was to treat disease, not make the feeding process more efficient,” Coleman said.

Coleman’s brother Greg encouraged his father to go to California, where so many trends start, in order to sell the product where it was in more demand.

He flew out West, went to a phone booth and ripped out sections in the Yellow Pages that indicated where natural grocery stores were located. He began banging on doors, Coleman said.

Eventually, he ran into Sandy Gooch, owner of Mrs. Gooch’s Ranch Market (which was bought by Whole Foods Market more than a decade later, in 1993). Mrs. Gooch’s was one of four or five small natural food chains at the time.

About this time, organic grains, vegetables and fruits were hitting the market but they could not officially be labeled as organic, much like the challenge Coleman faced with “natural” a decade prior.

Due to the family’s experience in this area, Coleman began serving on the board of directors for the Organic Foods Production Association of North America (OFPANA). It was the precursor to the Organic Trade Association. The association pushed to get “organic” into the 1990 Farm Bill and succeeded. The USDA then set up the National Organic Program, which develops the rules and regulations for all USDA organic products, and the advisory National Organic Standards Board. In 2002, the term “organic” became law and the term could be used on products meeting the standards.

“That’s when I was asked to get involved with Coleman and rejuvenate the brand,” Coleman said.

The Coleman Natural brand was readied for reintroduction with more than two dozen items, including fresh, case-ready, processed and deli meats. The breadth and depth of product offerings continues to expand with the introduction of the Budweiser BBQ Collection by Coleman Natural Foods. The line includes pulled pork, ribs and bratwurst that are infused with real Budweiser lager beer taste. 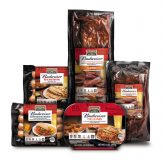 For the holidays, Coleman Natural Foods has expanded its ham offerings and introduced Italian-style sliced salumi. The uncured ham varieties now will include an 8-oz. ham steak to complement the larger serving sizes (whole spiral, half and quarter).

One of the most meaningful additions to the Coleman Natural Foods offering is their commitment to give back to our nation’s veterans. With every purchase of a Coleman Natural product, a portion of the proceeds will benefit Pups4Patriots, an initiative led by American Humane that pairs shelter dogs trained to be service animals with veterans suffering from post-traumatic stress or traumatic brain injury.

Coleman Natural Foods has committed $800,000 over the next three years to fund the training of more than two dozen dogs.