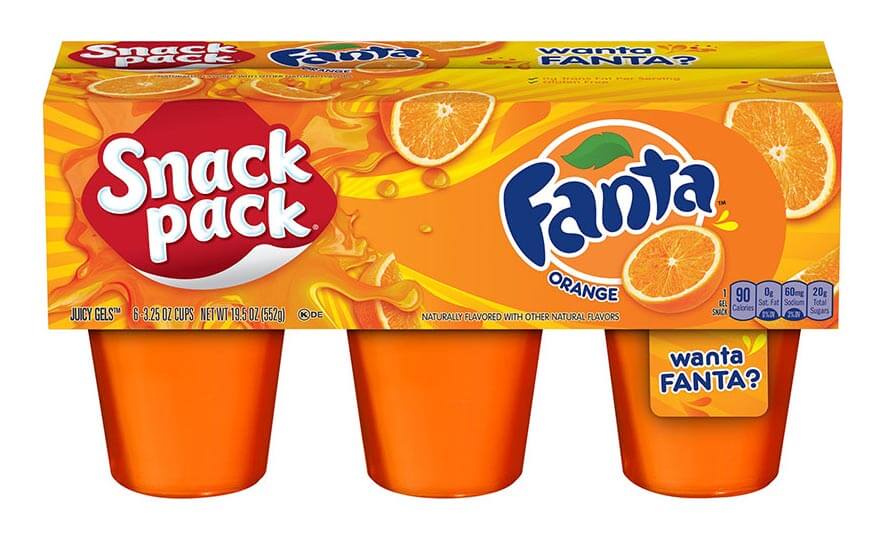 Snack Pack, a brand of Chicago, Illinois-based Conagra Brands Inc., maker of shelf-stable puddings and gels, is embarking on its first-ever co-branded partnership, teaming with Fanta, a fruit-flavored sparkling soft drink brand. With the arrival of new Snack Pack Fanta Gels, consumers can enjoy these two tastes together in three fruit flavors—orange, grape and pineapple. Each has been developed with a taste profile that mirrors Fanta soft drinks. Fanta is a product of The Coca-Cola Co.

“We’re thrilled to be teaming with Fanta on the launch of Snack Pack Fanta Gels,” said Audrey Ingersoll, brand director for Snack Pack. “Each cup is bursting with delicious fruit flavor. Whether you’re a lover of Snack Pack, Fanta, or both, we think you’ll find a reason to enjoy our new offerings. They’re the perfect go-anywhere treat.”

The introduction of Snack Pack Fanta gels is the latest in a series of innovations on the Snack Pack brand. Earlier this year, Snack Pack released two fantasy-themed pudding flavors: Unicorn Magic and Dragon Treasure.

The partnership with Snack Pack is the brand’s first co-branded partnership.

“Fanta is known for extraordinary flavors and orange, pineapple and grape are some of our most loved,” said Tutul Rahman, Fanta brand director, The Coca-Cola Co. “Bringing them to a new category in Snack Pack Gels, made all the sense in the world. We worked with the team to make sure that our iconic flavors came through and we have no doubt that Fanta Snack Pack Gels will definitely be a thing.”

Members of the Snack Pack and Fanta teams worked closely together, testing several recipes to develop a unique product that delivers authentic Fanta taste. Each of the three flavors will be available in six packs of 3.25-oz. cups and will retail for $2.79.

Snack Pack Fanta Gels will arrive on shelves in late November and be available at grocery stores and retailers nationwide.