Home » Kalera Is On The Cutting Edge Of Vertical Farming 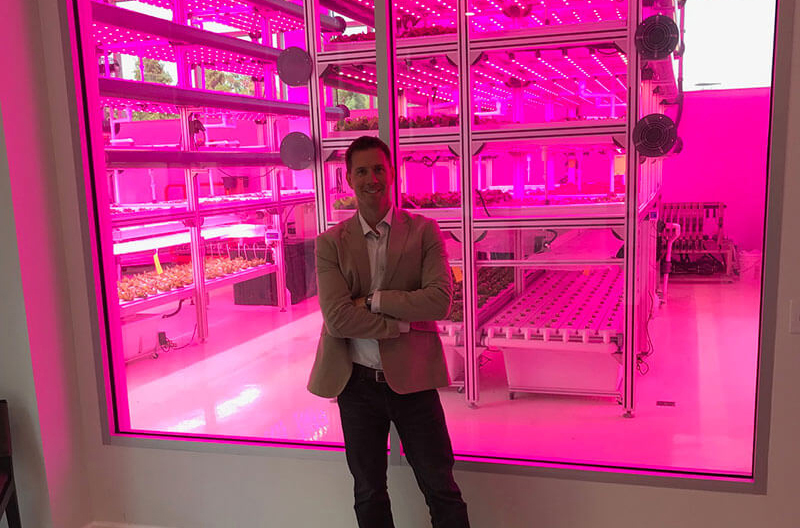 Kalera’s new CEO, Daniel Malechuk, sat down recently with Tom Bachmann, VP-Southeast for The Shelby Report, to talk about the company and its future.

Headquartered in Orlando, Florida, Kalera is getting ready to open a new 30,000-s.f. facility near the airport. The facility will produce millions of heads of lettuce each year.

Kalera was founded by two Cristians—Cristian Toma and the late Cristian Ivanescu. Toma now is chief technology officer for the company. The two men came to Florida to work on a project, envisioned by the founder of Subway, to make a city self-sustainable. Ivanescu and Toma became involved in hydroponics and, even after the original project went awry, they decided to continue their work, Malechuk said. That work, he added, is “using technology to change the way that the world eats.”

At the time of the interview, Malechuk had been with the company for just a few weeks but said he had learned a lot in the process of coming onboard. A North Carolina native and North Carolina State University graduate, Malechuk has spent his entire career in the food industry. Recruited by Aldi right out of college, he became a district manager and helped the company expand across the Southeast and the United States. He moved up the corporate ladder at Aldi, becoming director of purchasing for Aldi U.S. at the age of 27. From there, he left to run a seafood company, worked with a large foodservice distributor in the western U.S. and then went to Mastronardi Produce before coming to Kalera.

Kalera’s focus right now is on lettuce. Currently, the majority of lettuce in America comes from either the Salinas Valley in California or Yuma, Arizona, Malechuk said.

“You think about the amount of water, the soil, the labor and, more importantly, the transportation and the time to get it from the West Coast to the East Coast and how unsustainable that is,” he said. “Technology has advanced so much recently that it’s allowed us to really be able to much more economically bring produce right to where people are, in any kind of capacity.”

Kalera initially formed a partnership with Marriott in Orlando, which was looking for a way to bring more farm to table fresh produce to its hotel and convention center, Malechuk said. The HyCube facility was built last year on the premises of the Orlando World Center Marriott and now, the Marriott kitchen is just a few feet away.

“What a great story, to be able to take product to your guests that was still alive minutes ago…,” he said.

Advances in technology have helped bring the cost of hydroponic production down, as LED lighting has become more efficient and less expensive. The lights run 24/7/365 and, through different light spectrums, Kalera can manipulate the color of the lettuce as it grows, Malechuk said. Also, the size of the plants is extremely uniform, “which is a huge benefit to the chefs and people using them because they get the consistent product all the time, every time,” he said.

Another great benefit of the hydroponic process is the fact it uses 5 percent of the water that’s used in California for growing purposes. There’s no soil involved, which means no pesticides are used.

“There will never be any bugs in our product because we use clean-room technology—no bugs, no soil, no sprinklers,” Malechuk said. “The product is the same every single time. Every time the chef gets it, it’s fresh, it’s uniform, it’s exactly the same.”

Malechuk mentioned the recent romaine lettuce recalls for E. coli contamination and how scary and alarming those recalls are, not only for consumers but also for retailers.

In the new facility, millions of heads of lettuce will be grown in a vertical, floor-to-ceiling format which Malechuk said uses a fraction of the footprint that would be required to grow lettuce on land.

The growing cycle, from seed to harvest, is about six weeks. Kalera gets its seeds from suppliers in The Netherlands, which is where most seed technology is developed now, Malechuk said.

New varieties or new strains are coming out every few months and it’s all non-GMO, he added.

“That technology of what performs better with the nutrient-rich water and how it grows—there are very smart people behind that,” Malechuk said. “Our team works with those folks, but we’re not actually producing the seeds ourselves. We purchase from large seed companies that have lots of R&D behind them.”

Kalera does its own trials, using different lighting and different environments.

“We are concerned about how quickly it grows, what is the yield. Does it easily have tip burn, which can happen if the lighting  is not right or the air circulation is not right…,” he said. “The other thing that’s really exciting about it is the price level. It is consistent. You don’t have the fluctuation of in season or out of season, or an increase because of drought.”

Malechuk said what Kalera is doing is perfect science, with the environment controlled 24/7/365. The company is focusing its efforts on producing lettuce and on the potential for expansive growth in the coming years. Through its technology, Kalera can bring a nutritional product directly to people anywhere in the world.

“Imagine in the desert of Dubai,” Malechuk said. “Imagine in Thailand, where it’s hard to grow product. Imagine Antarctica or possibly even the space station or moon someday, or Mars, or wherever we may be.”

The moment lettuce is harvested in the field, it begins to die. Kalera calls its product living lettuce. The roots are still attached and when it is harvested, the roots can be twirled around the root ball.

“Plants die when you snap them from their roots,” Malechuk said. “If the roots are still there, the plant still thinks it’s alive.”

He gave an example of Kalera giving a sample of its lettuce to a local chef. He put it in his refrigerator then had to go out of town for three weeks. When he returned, he said Kalera’s lettuce, which still had its root ball, looked the same as the day he received it. Another piece of lettuce that had been left in his refrigerator did not fare as well, looking brown and dead when he returned.

“I think that is what’s so exciting about this, to do something that’s clean, that’s fresh, that’s sustainable, that’s truly making a difference in the world but, more importantly, giving a better product that’s more nutritional to the customer,” he said. “Technology is what’s made that all possible. I think we’re only going to see this continue to get easier to do as lighting becomes less expensive, as the technology gets more advanced, as the yields get higher. That’s what we’re excited about with our new facility, is that ability to prove it on a large scale then massively produce for the Southeast region of North America out of that facility.”

While foodservice is its main market currently, when the new facility opens Malechuk said the company plans to market its products to foodservice and retail.

Non-Food For Thought: New Year’s Resolutions For 2020
Piggly Wiggly Alabama Is Our 2019 Southeast Wholesaler Of The Year