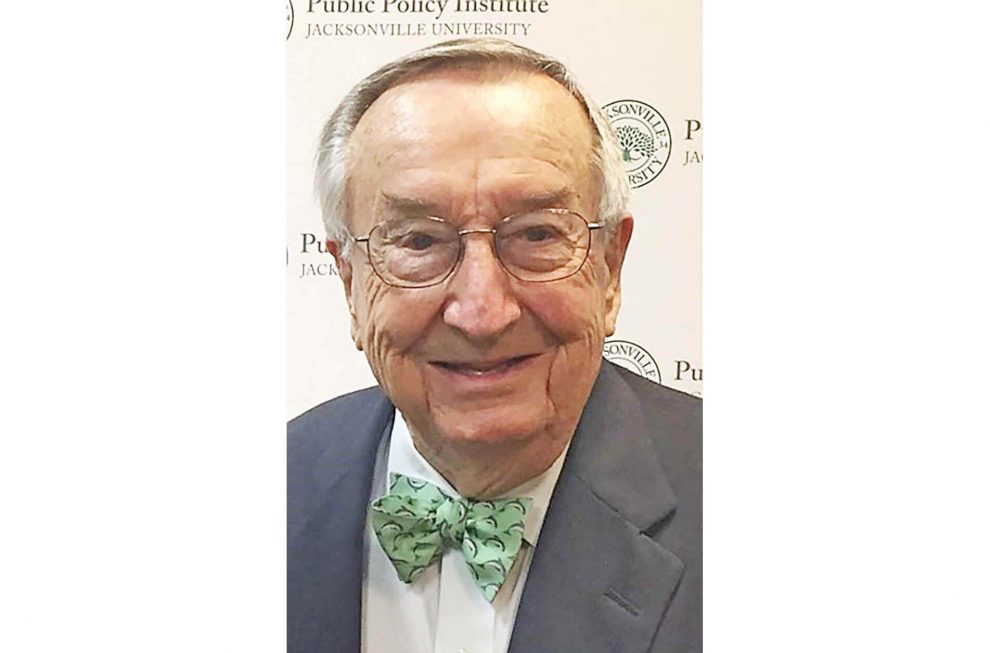 On Jan. 2, 2020, Robert Thomas (Bob) Shircliff, 91, died at home, surrounded by family. The elder son of Thomas Maxwell Shircliff and the former Martha Somes, he was born in Vincennes, Indiana, on May 20, 1928.

Mr. Shircliff graduated from Culver Military Academy in 1946, and earned a bachelor’s degree in marketing from Indiana University in 1950.

His many fond memories of IU included serving as a sportswriter for the Indiana Daily Student, forming lifelong friendships with his SAE fraternity brothers and working in his father’s Pepsi-Cola bottling plant part-time and in the summers. The highlight, however, was meeting the brilliant, beautiful and spirited Carol Reed, a fellow student, Bloomington native and the love of his life.

From their marriage on May 9, 1953, until his last breath, he was devoted to Carol and considered himself the most fortunate man on earth to have won her hand. The Shircliffs were blessed with two daughters, four grandchildren and seven great-grandchildren. Bob dearly loved them all, took great interest in their activities and stayed in close touch with them. He derived enormous pleasure from family gatherings, especially during the holidays, and was particularly grateful to share this past Thanksgiving with the entire family.

A member of senior ROTC at both Culver and IU, Mr. Shircliff joined the U.S. Army Reserve during his senior year of college and served until 1963, retiring as a captain in military intelligence. Upon graduation from IU, he joined his father’s Pepsi-Cola bottling business full-time, leading to 18 years of growth and adventure that culminated with his election as president of Pepsi-Cola Allied Bottlers Inc., president of the National Pepsi-Cola Bottlers Association (a position that also had been held by his father), and, later, the sale of the company to General Cinema Corp. Pepsi took Mr. Shircliff and his young family from Bloomington to Charleston, West Virginia, and then to Jacksonville, which they made their permanent home on Jan. 15, 1967.

After the sale of the business, Mr. Shircliff served on the board of General Cinema Corp. and oversaw 12 of its subsidiaries for nearly six years before departing to start his own consulting firm. There, he shared his knowledge and experience with bottlers nationwide, first through Robert T. Shircliff & Associates (eventually known as The Shircliff Group), and then as chairman of The Shircliff-Sisisky Co., formed with his dear friend and associate Richard Sisisky. He also served on the boards of numerous business entities, among them Shoney’s Inc., Alliance Mortgage Corp., Atlantic National Bank of Jacksonville, and Everbank Financial Corp.

Mr. Shircliff continued to advise and invest, particularly in technology and bioscience, until recent months, donning his trademark bowtie and heading into the office several days a week. He was especially enthusiastic about advancing new cancer treatments with the potential to benefit countless people worldwide and was grateful for the opportunity to be part of something so important to humanity.

Initially drawn to Jacksonville University by its excellent basketball program (the only game in town for Hoosier transplants in the late 1960s), Mr. Shircliff was a board member at JU for 23 years, serving as chairman and leading two successful capital campaigns. He expressed his deep appreciation for the arts through service on the boards of the Jacksonville Symphony Association and the Cummer Museum of Art & Gardens, both of which he chaired. To each leadership role, he brought his characteristic insight, effectiveness and diplomacy.

A member of St. Matthew’s Catholic parish for 53 years, Mr. Shircliff was an ardent advocate for faith-based causes and institutions, especially those benefiting the sick and the poor. He was a proud member of the Order of Malta and took great joy in serving gravely ill “malades” during the order’s annual pilgrimages to Lourdes.

In addition to chairing the Catholic Foundation and the Diocesan Stewardship Committee of the Diocese of St. Augustine, Mr. Shircliff played a leadership role in founding both organizations. He co-chaired a capital campaign to build two new Catholic high schools in the diocese and provided generous guidance and support for Guardian Catholic School, as well as its predecessor, Guardian of Dreams. But he is perhaps best known for his championship and support of St. Vincent’s Healthcare, now known as Ascension St. Vincent’s.

Known for both his personal generosity and his skill as a fundraiser, Mr. Shircliff estimated that he had helped to raise nearly $300 million to benefit the Jacksonville community over a period of approximately 45 years. Endlessly humble, he always stipulated that each campaign was a group effort, but he wasn’t shy about asking others to support a cause he believed in. And he delighted in educating others about the joys of giving—especially if he didn’t think they were giving enough!

As a result of his devotion to civic and charitable activities, Mr. Shircliff received numerous honors and awards, most recently, the 2018 Thompson S. Baker Award from Junior Achievement of North Florida.

Over the years, he was honored by the Jacksonville Regional Chamber of Commerce, Jacksonville University, Leadership Jacksonville, Prevent Blindness Inc. and Volunteer Jacksonville, and named to the Business Hall of Fame by the Florida Economic Education Foundation. OneJax (formerly NCCJ), presented Mr. Shircliff with both its Gold Humanitarian Award and a Silver Medal, and he received a number of awards for his fundraising endeavors.

The Association of Fundraising Professionals’ First Coast chapter presented him with its Lifetime Achievement Award; the National Society of Fundraising Executives named him both Philanthropist of the Year and National Volunteer Fund Raiser of the Year; and he received a Heritage Award from the Daughters of Charity National Health Systems. In 2001, His Holiness John Paul II presented Mr. Shircliff with the Pro Ecclesia et Pontifice Cross, a decoration of the Holy See conferred for distinguished service to the Catholic Church. And in 2007, the City of Jacksonville recognized his extraordinary civic and philanthropic contributions by renaming a portion of Barrs Street in front of St. Vincent’s Hospital to “Shircliff Way.”

Mr. Shircliff will be remembered by his family and a wide circle of friends as a true gentleman, a patriot and a person of unshakeable integrity. His humor and kindness endeared him to everyone he met, and his curiosity and enthusiasm kept him young and made him a delightful companion. A true representative of the Greatest Generation and a Christian who strove each day to live his faith, he used his own success to benefit others as a friend, mentor, volunteer and philanthropist, whose many acts of generosity were not even fully known by those who loved him best. He made the world a better place and will be dearly missed.

He was preceded in death by his parents; his brother, James (Jim) Vanderburgh Shircliff; and his daughter, Elizabeth (Betsy) Somes Shircliff.