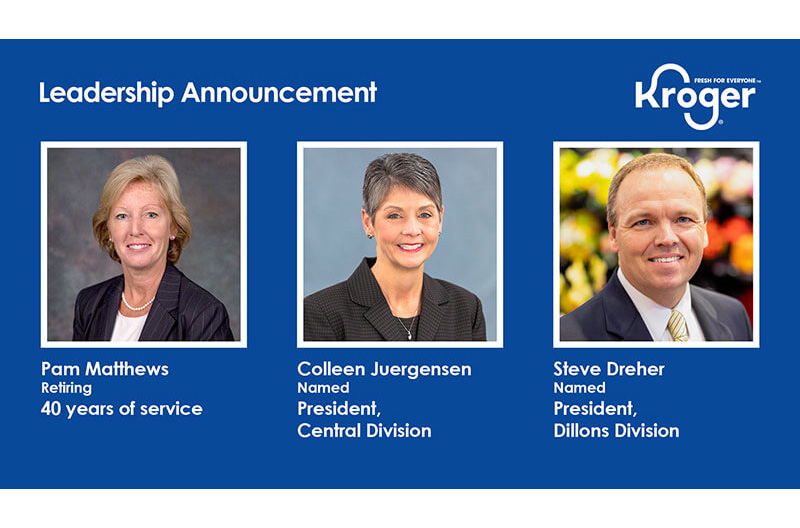 Matthews will retire from the company, effective Feb. 2, after 40 years of service.

“Pam’s passion for our associates and the retail business has been demonstrated throughout her successful career with Kroger,” said Mike Donnelly, Kroger’s EVP and COO. “She has been an exceptional mentor and coach to many and will leave a legacy of caring, dedicated teams who care about each other and the customers and communities they serve.”

Matthews began her career with Kroger in 1980 as a courtesy clerk in the Fred Meyer division. She held a variety of leadership roles in her 25-year career with Fred Meyer before being promoted to a director of merchandising at Kroger’s corporate office in Cincinnati. In 2006, she was promoted to VP of merchandising for the Central division. Several years later, she moved to the Delta division to serve in the same role and ultimately became the region’s VP of operations. In 2016, she was promoted to president of the QFC division and then became president of the Central division in 2017.

Active in the community, Matthews serves on multiple boards of directors, including the Riley Children’s Foundation and the local organizing committee for the 2021 NBA All-Star Game. She previously was a board of director member for the Julian Center, a non-profit that empowers survivors of domestic violence.

Matthews received the “Indiana Fever Inspirational Award,” which was featured in Indianapolis –To Her Success.

In her retirement, Matthews and her husband, Craig, plan to continue to reside in Indianapolis, travel, spend the cooler months in Florida and welcome their first grandchild in March.

Juergensen will succeed Matthews as president of the Central division, which has 134 stores and more than 15,000 associates, primarily throughout Indiana, southern Illinois and eastern Missouri..

“Colleen has been very successful throughout her long career with the Kroger Family of Companies, and we know she’ll continue to serve our associates, customers and communities with excellence as the leader of our Central division,” Donnelly said. “Her diverse background in operations and merchandising, joined with her passion for the community, will help us deliver our vision to serve America through food inspiration and uplift.”

Juergensen has more than 38 years of experience with the company and began her career in 1981 as a bakery clerk in her hometown of Great Bend, Kansas. She has served in various leadership roles in the Dillons division, including store leader, district manager and director of advertising. She was promoted to VP of operations for Dillons in 2008. She transferred to the Smith’s division as VP of operations in 2012 and was then named VP of merchandising in 2015. Juergensen was promoted to her current role as president of Dillons in 2016.

Passionate about the community, Juergensen served on the board of directors for United Way of Reno County, the Hutchinson Chamber of Commerce and Dillons Credit Union. She is an avid supporter of all food bank locations in Kansas, Nebraska and Missouri, and the American Heart Association, Big Brothers Big Sisters and Susan G. Komen.

Juergensen has been recognized by Ingram’s magazine as one of the 50 Kansans You Should Know.

Dreher will succeed Juergensen as president of the Dillons division. The Dillons division includes 80 stores with 11,500 associates serving customers across Kansas, southeastern Nebraska and central Missouri operating under the Dillons, Baker’s and Gerbes banners.

“We are pleased to elevate Steve to the role of division president at Dillons,” Donnelly said. “Steve has driven positive results in his role as vice president and understands the Dillons customer and market well. We look forward to his continuation of achieving great results and inspiring our associates to deliver the outstanding customer experience expected at Dillons.”

Dreher began his career with the company 1985 in Hays, Kansas, as a courtesy clerk. He was promoted to assistant store leader in 1998 and soon after was promoted to store leader. In 2003, he was promoted to division labor specialist and then labor manager. Dreher served as a district manager in several regions before being named to his current role of VP of operations in 2018.

Dreher is a Knights of Columbus member and supporter of all food bank locations in Kansas, Nebraska and Missouri, Susan G. Komen and United Way. He is also the executive sponsor for the multicultural associate resource group (ARG) for the Dillons division.