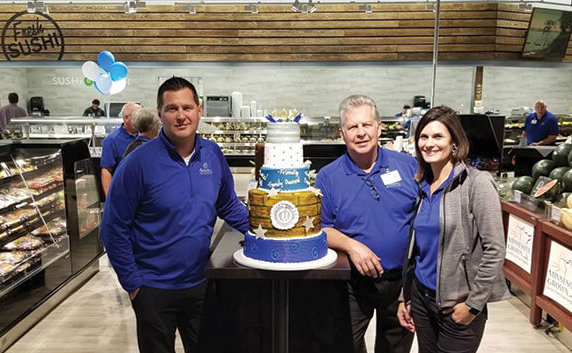 August Mackenthun opened a little butcher shop in Plato around the turn of the last century. The exact year is not known, said Kim Mackenthun, who with his son, Jaime, and daughter, Jessa, owns the business today. 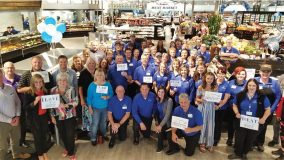 “Jaime and Jessa’s great-great-grandfather started a little store 12 miles west of (Waconia) right about 1900,” Kim said. “I asked my grandfather, ‘When did great-grandpa start that store?’ And my grandpa didn’t even know when he was still alive. So, we’ve been around since about 1900.”

What is known for sure is that Mackenthun’s has been in Waconia for 102 years because it was in 1917 that August’s son, Arthur, brought on a sausage maker from Germany and opened his own meat market there, according to the family history.

Arthur’s son, Marvin, served in World War II. When he returned to Waconia, he added a full line of groceries to the market. Kim is Marvin’s son.

In 2017, Mackenthun’s Fine Foods in Waconia was honored by the Minnesota House of Representatives for its longevity. Rep. Jim Nash presented the Mackenthun family with a House Resolution to commemorate 100 years in the grocery business. Mackenthun’s is the oldest, longest-running grocery organization in Minnesota.

Mackenthun’s operates three locations today. Stores in Lonsdale, which has a gas station and convenience store attached to it, and Montgomery were added in 2016 when Mackenthun’s purchased Fred’s Market Place stores from Fred Braegelmann.

The family made those stores, which come in at about 22,000 s.f., their own soon after taking ownership by adding more variety in the produce departments and new deli counters, among other changes. 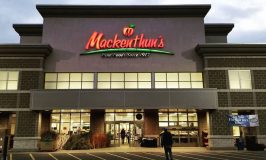 The Waconia location, at 63,000 s.f., is the largest. The completion of a refresh project was celebrated in August of 2019.

“The reason we started it was due to what shoppers were buying and what they were asking for, so we expanded our deli to have a large hot bar, a larger salad bar,” Kim said. “We added soup wells. We had two but now we have five.

“Jaime originally did the analysis showing that about 75 percent of our business was in less than 20 percent of our store space, so we took two complete grocery gondolas out and turned all that into perishable areas,” Kim added. “We expanded primarily the deli, produce, bakery and meat.”

The family kept the store open the entire time it was being remodeled. Some of the construction was done overnight. Products were shifted between coolers to make sure customers could get what they needed. Jaime said 90 percent of what was in the store was moved.

“There was a lot of moving things around, and we would get products from our back freezer and warehouse for our customers,” Jessa said. “When we were moving aisles, our customers were pretty patient through all of it and were excited to see what it was going to turn out to be.”

Jaime said the community is happy with the refresh and shoppers have told the family how much they are enjoying the new look of the store and the expanded offerings, including the addition of a Caribou Coffee shop.

“Our sales have shown it, too. We knew where we needed to add with the perishables. They’ve definitely grown considerably, and even with cutting down our center store, those sales have still climbed even with less space,” Jaime said.

The grocery company added employees in Waconia after the refresh to provide its signature products and services. Also, Mackenthun’s Fine Foods has a successful pickup service provided not by a third-party but by its own associates.

“We hired and trained people to do it,” Kim said. “We don’t want somebody else’s employees taking care of our customers. We can’t control that. There’s the possibility that our customers wouldn’t be taken care of to the standard that we think they should.”

Mackenthun’s pickers are doing it right, considering that the average online order is “quite a bit larger” than in-store baskets, and customers who have tried the service have since used it dozens of times, Jessa said.

As mentioned previously, Mackenthun’s has been known for its homemade sausages since August opened his butcher shop 102 years ago. The mainstay product still is made on-site in Waconia.

“We’ve got five people who work in the sausage kitchen, and we do all our own smoked hams and turkeys,” Kim said. “We have a huge sausage business with 40 different kinds of brats in the summertime.”

The Shelby Report talked to the Mackenthuns before Christmas, and the sausage varieties prepared in-house for the season included Swedish sausage, a blueberry wild rice brat and cranberry summer sausage.

The service meat counter also now has a specialist for fresh fish and seafood.

Kim said the bakery also was expanded significantly. Offerings in that department for the holiday season included Christmas cookies and more than a dozen candies, including nut clusters and several varieties of brittle. Those goodies are made and packaged in the store.

The fresh, homemade items Mackenthun’s is known for won’t be found at competitors’ stores, like a Target with groceries, Aldi or the Dollar General stores that in recent years have proliferated in what Kim called the “second-ring suburbs” around the Twin Cities, where the company operates its three stores. The population of the communities Mackenthun’s serves range from 12,000 in Waconia to about 4,000 in Lonsdale and 3,500 in Montgomery.

The company gives back to those communities. It holds golf tournaments to raise money for local food shelves and since it began a “Stuff the Truck” event 10 years ago, it has donated more than 331,000 pounds of food.

The family-owned company takes care of its homebound shoppers, delivering from both grocery departments and the pharmacy when needed.

“The Mackenthun family is a stellar example of a community partner,” MGA President Jamie Pfuhl told The Shelby Report. “Their recent remodel is a testament to their vision and willingness to go above and beyond to surprise and delight. Kim, Jaime and Jessa are all active members of the MGA and have a genuine passion for the advancement of our great industry.”

All three have served or are serving in leadership capacities for MGA. Kim served two terms as MGA chairman and was presented with the MGA Outstanding Grocer Award in 2001. He also was inducted into the MGA’s Hall of Fame in 2014 for his contributions to the food industry of Minnesota.

One can’t help but wonder if, just like their grandpa, Kim—who started working in the Waconia store as soon as he was old enough to sort pop bottles—Jaime and Jessa’s children will continue the family business when they grow up.

“I keep saying that it’s gotten to be part of our DNA, so I’m kind of expecting it,” Kim said. “We’ll see what happens.” 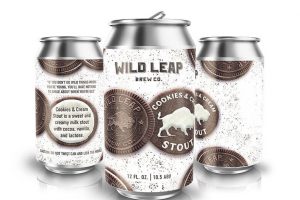