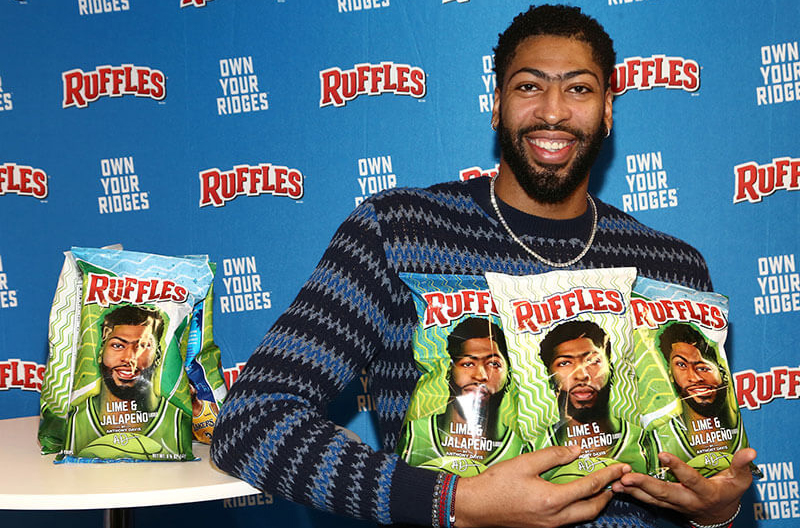 Plano, Texas-based Frito-Lay started the year with a rush of news, announcing new products as well as, for the first time, a new product created in partnership with an athlete.

The “Chip Deal” Frito-Lay announced last summer with six-time NBA All-Star Anthony Davis to endorse Ruffles has yielded a new chip flavor: Lime & Jalapeño. Davis joined Ruffles recently in Los Angeles at an exclusive gathering where more than 300 guests were among the first to taste the new product.

“The Chip Deal is transcending the notion of traditional athlete endorsement deals: pairing Anthony Davis’ commitment to impact beyond the court and bringing fans something unprecedented from a potato chip brand,” said Sadira Furlow, VP of marketing for Frito-Lay North America. “With the launch of Ruffles Lime & Jalapeño, we translated Davis’ energy and originality into an incredible potato chip flavor that is undoubtedly one of the most innovative flavors in Ruffles history.”

“From behind the scenes of sneaker creation to the art of potato chip flavors to the design process of chip packaging, it’s a real win to have a partner who’s so committed to creating new unexpected experiences for fans,” said Davis. “I can’t wait for everyone to get a taste—literally—of the latest chapter of my Chip Deal with Ruffles, my Lime & Jalapeño signature flavor.”