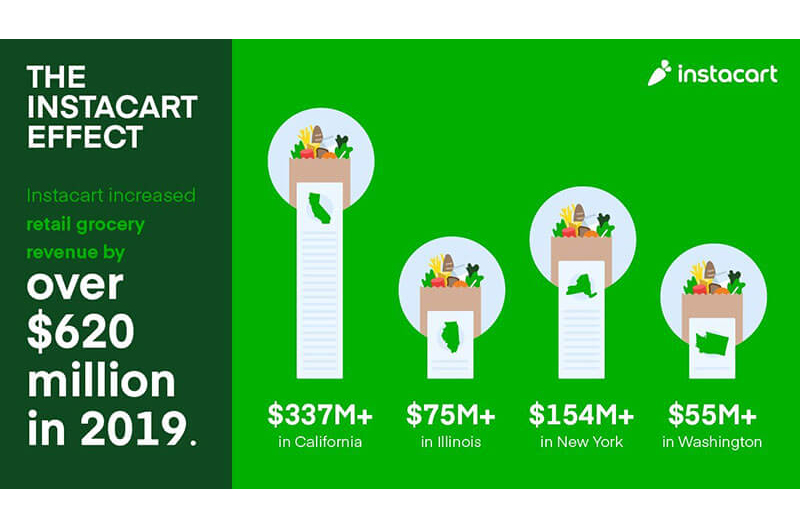 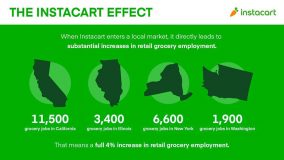 The study found that by creating additional customer demand for grocery stores, San Francisco-based Instacart increased retail grocery employment by 23,000 net jobs and drove significant incremental revenue across four states. According to the study, the entry and expansion of Instacart into local markets acts as an economic complement to grocery store employment, bringing incremental business to the store while creating an e-commerce footprint for retailers.

“Instacart is changing the way customers engage with grocery stores by creating a complementary online service that would be prohibitively expensive for traditional retailers to offer on their own. The result is increased grocery demand, which translates into higher grocery store employment and revenue. The data indicates that in 2019, “The Instacart Effect” was responsible for an increase of more than $620 million in revenue and more than 23,000 jobs in the grocery sector in California, New York, Illinois and Washington. These findings demonstrate that Instacart has played an important role in helping the grocery industry compete in a challenging economic environment,” said Kulick. “It is often assumed that disruptive innovations necessarily displace traditional modes of commerce and employment. However, with Instacart the opposite is true. While Instacart is changing the way customers interact with grocery stores, it is an example of how innovation can benefit industries and their workers.”

Using rigorous statistical methods and analyzing data from California, Illinois, New York and Washington, the study demonstrates a robust relationship between Instacart adoption in local markets and employment and revenue in the grocery industry.

Key findings of the study include:

At the state level, the study finds:

“Investing in an online retail experience is critical to the success of grocers competing for consumer attention today. The technology and fulfillment needs are complex, and the cost is prohibitive for many. But, with Instacart’s support, more than 75 California retailers across 3,500 stores are now online, offering delivery and pickup services that meet the growing needs of their customers,” said Ron Fong, California Grocers Association president and CEO. “What Instacart is bringing to the state of California and the rest of the U.S. is a growth runway for brick-and-mortar grocers that deserve the opportunity to continue to serve their local communities for many generations to come.”

“Today in the U.S., grocery is almost a $1 trillion industry—but it’s only now going through its first big wave of tech innovation. Change in a business sector often comes at the detriment of incumbents, and we’ve seen this play out again and again across industries. But it doesn’t have to be that way. Since day one, our goal at Instacart has been to lift up our brick-and-mortar grocery partners and give retailers of all sizes an edge in an increasingly competitive industry,” said Nilam Ganenthiran, president of Instacart. “While we’ve long seen in our own internal data that Instacart can incrementally boost retail partner sales between 50 percent to 80 percent, this study shows that when Instacart enters a market the tides turn and ‘The Instacart Effect’ drives meaningful job creation and increased revenue for the grocery industry.”

The retail grocery industry represents 17 percent of retail employment and 13 percent of retail sales. The study highlights the increased competition facing grocers, which has led to significant economic pressure on the industry. More grocery retailers are turning to delivery solutions like Instacart to compete—and this data provides statistical evidence that the partnerships are helping with retailers’ overall growth.