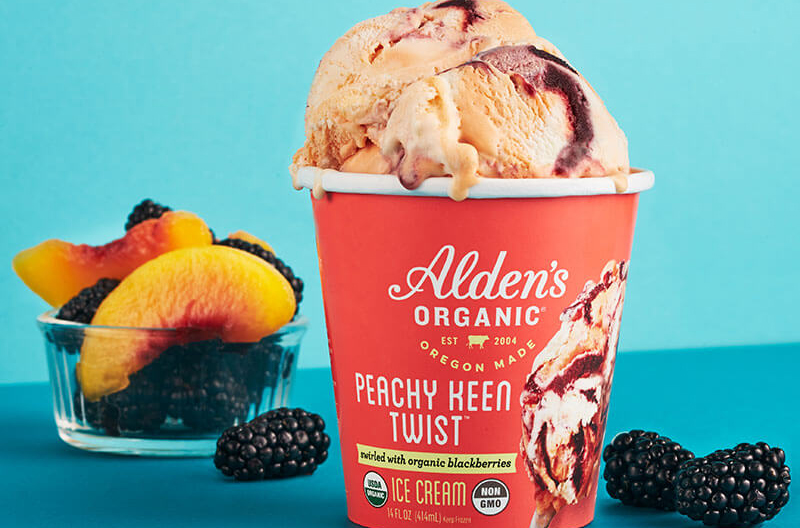 Alden’s Organic fans have been heard as the organic ice cream maker is now offering two new 14-oz. pints and one 48-oz. sqround. The three new flavors that will be sampled during Natural Products Expo West from March 5-7 at Alden’s Organic Booth 2137 in Hall B are:

“Peach has proven to be popular year round and our fans have been asking for a brownie flavor for years. We are proud to go all in on these new products that deliver delicious true-to-flavor taste that Alden’s Organic is known for,” said President and CEO Eric Eddings.

Alden’s Organic’s line of 14 oz. pints, launched in 2019, is exceeding expectations. With the addition of these two new offerings, the line will offer consumers 10 options. “Consumers are looking for flavor variety in a personal indulgence size that allows them to try several at a time. We are responding to consumer demand for this line by expanding it,” Eddings said.

Alden’s Organic also will be adding a third vanilla to its family of 48-oz. sqrounds, with the release of Old Fashioned Vanilla.

“Consumers are passionate about vanilla and our Vanilla Bean and French Vanilla are top sellers. Our new Old Fashioned Vanilla will provide a third classic option that is crafted for everything from ice cream recipes to milkshakes,” Eddings said.

The new flavors are currently on shelf at NCG, New Seasons, Market of Choice, Select Natural Grocers and PCC and will be rolling out in more stores nationwide in the coming months.

Alden’s Organic was launched in 2004 in Eugene, Oregon, where they still make every batch. Alden’s products are certified organic, non-GMO and are available at more than 10,000 natural, specialty and traditional stores across the U.S. The brand’s parent company, Oregon Ice Cream, is privately owned and has been making ice cream in Eugene, Oregon, since 1938.