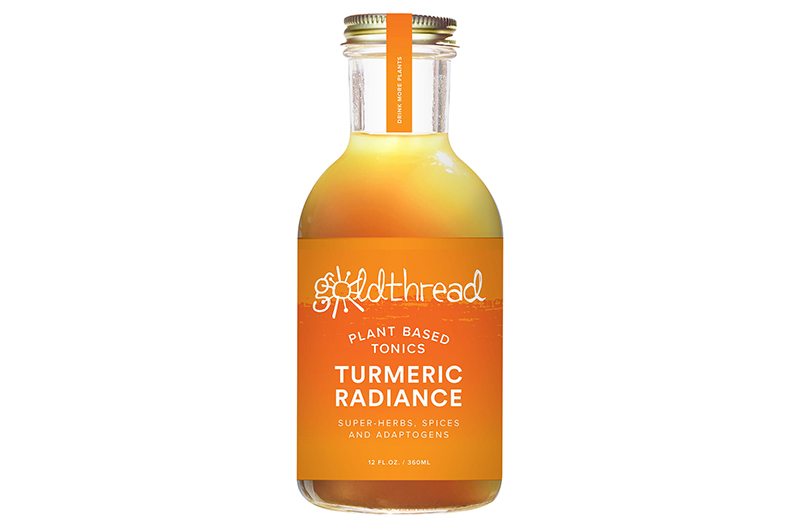 The beverages are now available and retail for $3.49 each.

Turmeric Radiance is a tonic based on Ayurvedic tradition, formulated to support optimal digestion and powerful anti-inflammatory action. It contains 11 different tropical spices, gathered in the cardamom forests of Kerala, India, for maximum potency.

A tonic full of nutrient-dense plants, Green Minerals is made up of plants that are rich in trace elements and minerals. Green Minerals brings sheen to hair, skin and nails while strengthening bones and helping to replenish when you’re feeling depleted.

Hawaiian Ginger combines tangerine, jasmine, vanilla and an assortment of spices with fresh ginger grown in the volcanic soils of Hawaii. One of the most versatile health-enhancing herbs, ginger supports digestion, circulation and optimal health.

Drinking aromatic plants is one of the great secrets of the Mediterranean people, famous for their vibrant health and longevity. Mint Condition is a blend of mints and other aromatic plants and is sourced from the remote alpine regions in the south of Greece along the Aegean.

Lavender Bliss contains five kinds of flowers, including linden, lavender and saffron, which are sourced from the meadows of the south of Provence, France, and blended to help to ease the nerves, soothe the system and refresh.

Native to coastal South Africa, Honey Rose is a restorative tonic. Honeybush, blended with a combination of spices and flowers creates a smooth and satisfying infusion that’s rich in phytonutrients and antioxidants.

Goldthread was created with a mission to inspire people to drink more plants. Founded more than 15 years ago as an apothecary and herb farm in Western Massachusetts, the plant-based tonic company has since expanded its focus as the first of its kind in an entirely new category of healthy beverages.

Siff, who has more than 20 years’ experience in the natural health and wellness world as a clinical herbalist, ethnobotanist and licensed acupuncturist. Each bottle of Goldthread contains 14 grams of super-herbs, spices and adaptogens that are synergistically sourced from around the world. Goldthread is headquartered in Santa Monica, California, and is Certified Non-GMO with organic and vegan ingredients. Goldthread is currently offered in 12-oz. bottles at select retailers nationwide.