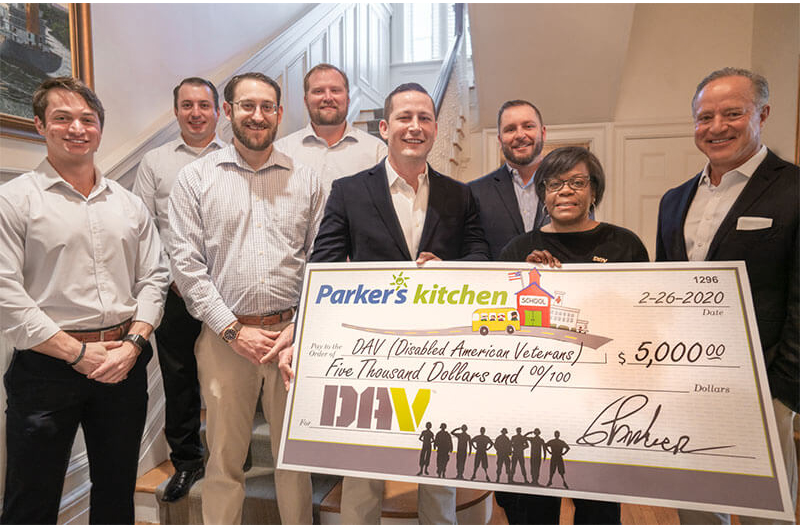 “We are thrilled and honored to receive such a generous donation from Parker’s and are grateful for their thoughtful gift,” said DAV National Adjutant Marc Burgess. “These funds will go directly toward supporting America’s veterans and ensuring DAV can continue to offer exceptional service to our nation’s heroes, at no cost to the veterans or their families.”

Founded in 1920 and chartered by the U.S. Congress in 1932, DAV is dedicated to a single purpose: fulfilling America’s promise to the men and women who served. The nonprofit organization ensures that veterans of all generations and their families can access the full range of benefits available to them, fights for the interests of injured veterans on Capitol Hill, links veterans and their families to employment resources and educates the public about the sacrifices and needs of veterans transitioning back to civilian life.

“At Parker’s, we have a strong commitment to supporting military veterans as well as active-duty military and currently employ more than 120 veterans,” said Parker’s President and U.S. Army veteran Jeff Bush. “We’re impressed that DAV goes ‘above and beyond’ to provide resources for veterans and their families throughout the year. We believe in their mission and want to do everything we can to support area veterans in need.”

In addition, DAV chapters and departments across the nation are actively combating veteran homelessness at stand down events across the country. These events connect veterans who are homeless or at risk for becoming homeless with services such as medical screenings, claims benefits counseling, housing assistance, job placement services, financial advice and other potentially life-changing resources.

Parker’s gives back to every community where stores are located through its Fueling the Community Program, which donates a portion of the profit of every gallon of gas sold on the first Wednesday of the month to area schools. In addition, the company endows the Parker’s Emergency and Trauma Center at Memorial Hospital in Savannah and spearheads an anti-litter campaign in Savannah. Parker’s founder and CEO Greg Parker donated $5 million to name the Parker College of Business at Georgia Southern University in 2018.

With retail stores throughout coastal Georgia and South Carolina and a major expansion into the Charleston, South Carolina market currently underway, Parker’s is on track to become a billion-dollar company. Parker’s has enjoyed 20 to 24 percent annual growth for the past 19 years and was named to the Inc. 5000 list of the Fastest Growing Companies in America for the fifth time in 2019. The company employs more than 1,200 individuals throughout the region and completes more than 125,000 transactions daily.