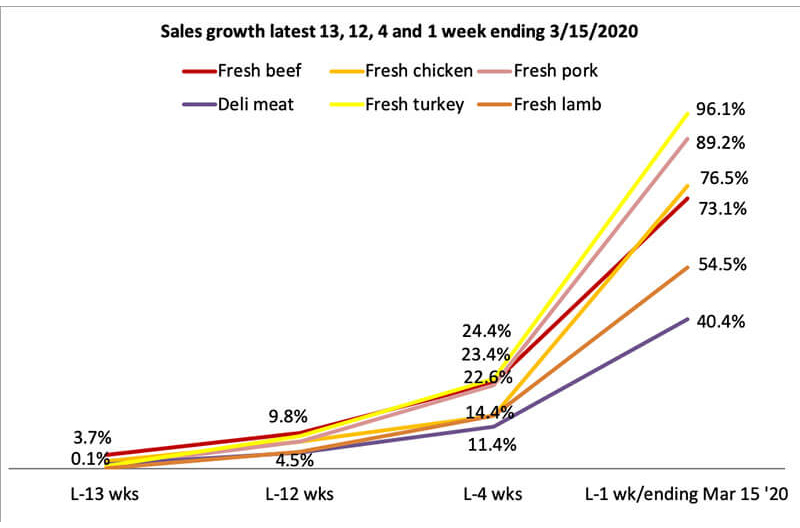 The week ending March 8 saw a fast acceleration of meat sales in dollars, units and volume, according to information from Anne-Marie Roerink, president of 210 Analytics, and Chris DuBois, SVP of protein practice with data insights firm IRI. As the number of school closures, social distancing guidelines and other Covid-19 related measures significantly sharpened the subsequent week, sales surged along with it. Thanks to the “heroic efforts” of everyone in the meat and poultry industry, the supply kept flowing, Roerink and DuBois said. Retailers restocked their meat cases again and again as shoppers across the country stocked up on meat and poultry to feed their families.

Meat department sales without deli meat were up 76.9 percent over the week ending March 15, versus the comparable week in 2019, according to IRI, and deli meat sales advanced 40.4 percent. Whether fresh beef, chicken, pork, turkey or lamb, smoked meats or deli meats, shoppers were in the market for it all. Thirteen weeks prior to March 15, IRI found the highest growth for fresh beef, at +3.7 percent and the lowest for fresh lamb, at +0.1 percent. Twelve weeks prior, beef growth jumped +9.8 percent and lamb +4.6 percent. During the week of March 15, turkey registered the highest growth nearly doubling dollar sales, at +96.1 percent and lamb increased sales by more than 50 percent as well. Beef and chicken, by far the largest categories, increased sales by $376 million and $183 million, respectively.

Volume sales for the week of March 15 were up 68.7 percent, made possible by processing plants ramping up capacity and distributors diverting supply from foodservice to food retail. Amid the growing number of Covid-19 cases across the country, shoppers started preparing for prolonged stays at home, working from home and restaurant closures.

At Winn-Dixie, Mike Freeman grabbed the last few packages of ground beef and moved on to ground turkey and lamb. He said, “normally I don’t freeze any meat and prefer to just buy it fresh every few days. But it can’t hurt to have a little extra.”

After asking him if he typically buys ground turkey and lamb, he answered, “no, not really. I’ve tried ground turkey a time or two but I’ve never cooked lamb before. It looks just like ground beef or bison, so how hard can it be. And it’s simply slim pickings.”

According to IRI, ground continued to be big, regardless of species, given its versatile and easy-to-prepare nature.

A Detailed Look by Area

Sales surged across all proteins and offerings.

Fresh chicken gained just under $183 million, or +76.5 percent over the week of March 15, according to IRI. Volume sales accelerated along with it, +72.0 percent. Generating half of total chicken sales, chicken breasts sold an extra $89.5 million, or +73.5 percent. Chicken thighs  gained more than $20 million (+76.9 percent) and chicken legs increased more than $12 million, +79.7 percent.

Fresh pork sales quickly accelerated as well, up 89.2 percent or $87.9 million for the week ending March 15, according to IRI. Making up just over 45 percent of pork sales, pork loin added $36.9 million in new dollars, or +77.2 percent. Pork ribs were the second-biggest winner in absolute dollars, up $17.6 million or +112.4 percent, followed by pork shoulder blade, up $12.0 million, or +117.0 percent. Smoked pork and ham sales, too, increased significantly over the latest week, at +67.6 percent and +116.7 percent, respectively.

The subsequent week, March 16-22, saw both an increase in the number of school/office/restaurant closures, social distancing guidelines and other Covid-19 related measures, and a rising number of confirmed coronavirus cases in the U.S.

Sales updates will be provided weekly, every Tuesday.