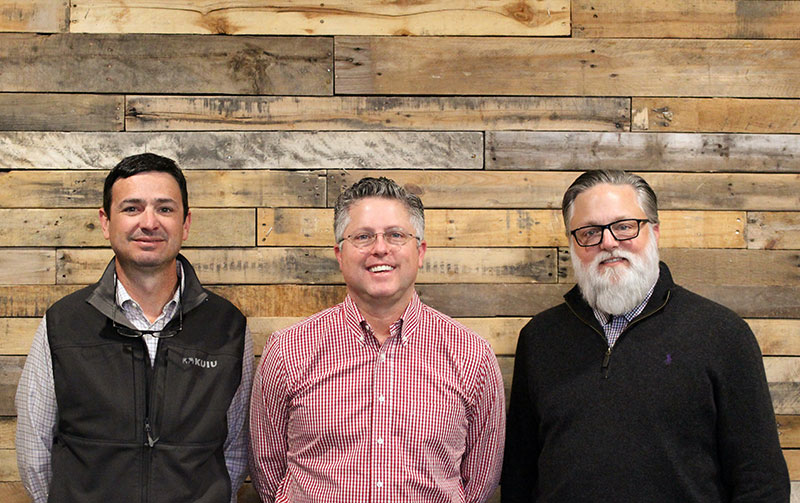 Gary Huddleston, a former longtime Kroger executive now serving as grocery industry consultant for the Texas Retailers Association (TRA), describes the grocery business as being robust across most areas of Texas.

“Western Texas is certainly unique. There are three or four metro areas, but the vast majority is rural. The four major areas are doing well in the supermarket industry,” Huddleston said.

The latest trend, he said, is ordering groceries online and either picking them up at the store or having them delivered to one’s home.

“Most of our supermarkets, certainly the major ones, are providing both of these services for their customers,” Huddleston said, adding that BOPIS (buy online pick up in store) is a more feasible method because many rural shoppers make just weekly or monthly trips to their grocery stores.

The most recent session of the Texas Legislature brought changes involving alcohol and tobacco. Supermarkets that sell beer and wine can now offer delivery, and the age to purchase tobacco was raised from 18 to 21.

“This new legislature allows third parties or the company to deliver beer and wine to the home,” Huddleston said. “This is one piece of legislation we believe is helpful and makes things more convenient for customers.”

Texas’ legislature meets during odd years, so the TRA is working on issues for the 2021 session. Huddleston said his organization will push for some relief on the inventory tax, continuing an effort from the past few sessions. Supermarkets currently are taxed on inventory on the shelves, in the backroom and in warehouses.

The change in the tobacco law hasn’t been a big issue for grocers, Huddleston said. During the last legislative session, the legal smoking age was raised to 21, with an exception for members of the military between 18 and 20.

Finding sufficient labor, as is the case in many areas of the country, is the biggest challenge for grocers, Huddleston said, along with keeping employees trained so they can be information resources for customers.

Huddleston praised the grocery industry for its strong support of food banks such as the West Texas Food Bank, which serves 17 rural counties.

“Although the economy is strong, there is still a need for food banks,” he said. “They can take products prior to expiration that the industry is long on and distribute to folks in need. This is a real sustainability program and it serves folks that need it.”

Sometimes location can be fortuitous. Judd Porter, the third-generation owner of Porter’s, credits the oil industry for helping sustain robust sales for nearly half of his company’s 11 stores in West Texas.

“We’re in a unique part of Texas, with several of our stores in the Permian Basin,” Porter said. “It’s the epicenter of commerce in Texas. Oil is booming. Whenever I meet someone, they usually ask about the oil business. The answer is that we are all in the oil business here.”

Five of Porter’s stores are in the oil-rich Permian Basin. Porter is partners with his brother, Trae, and brother-in-law, T.O. Clark.

“It’s the grocery business,” Porter said. “People are hungry when they get here. As an industry, we seem to overthink things when we are all looking at the same thing. While everyone is looking at click-and-pick and all the different technologies that are available, mainly what we are trying to do is give the customer a pleasant shopping experience.”

Porter dismissed the concern that some people have about brick-and-mortar stores becoming a thing of the past. He believes customers will continue to shop at their local grocery stores, but independent grocers have to be more diligent about meeting their customers’ needs and staying on top of technology.

“Sometimes technology comes and goes,” Porter said. “I don’t know where I will land on online shopping yet, but we are planning on rolling out click-and-pick this year. We are listening to our customers who want it. I understand the thought process, but at the same time nobody has been successful with it. In an effort to add value for our customers, we will give it a go because our customers have asked for it.”

Another recent change involves advertising. Porter said his company ceased mailing out advertising circulars last year. “We felt like we could use those dollars in a better way for marketing, so we pulled the plug on it in November. We don’t insert in newspapers, either, except around the big holidays.”

Instead, the company is doing more online and in-store advertising. Porter said this method reaches more people for a lot less money.

“We call it guerilla marketing, with more person-to-person contact. We have also asked our manager to have two points of community contact and become more involved with community organizations,” Porter said. “We are a few months in, and I haven’t seen sales dip anywhere. If we ever feel like it’s the wrong path, we will back up and do something different.”

Porter has expansion on his mind, but is waiting for the right opportunity.

“I would love to expand, and our preference is to buy existing grocery stores,” he said. “That’s a better path to success. Expansion should be slow and methodical. We are looking for opportunities. We would make a deal in a heartbeat if the right one comes along. Last year, we added two stores.”

They are located in Seminole and Midland.

Porter is optimistic that 2020 will be a strong year for his company as it sorts out new technology.

“We’re going to have more consistent growth, which is the best kind of growth, and we are excited about it.”

In the panhandle, Fiesta Foods also is turning to technology to keep customers happy. The three-store grocer plans to add online ordering and pickup service at its newest store in Amarillo by April 1.

Store owner Ken Copheranham said the ramping up process for the service has taken considerable time, including design of a new website. The new service is a result of three focus groups the company convened last fall. Copheranham said about half of those participating expressed interest in online ordering.

“They all were younger customers,” he said. “I don’t think the ones interested in online ordering were shopping with us already. What we are looking to find are new customers. In adding curbside pickup, you lose impulse sales, but these are customers we don’t have anyway.”

The new store—a 36,000-s.f. location—opened last March and is Fiesta Food’s largest. Copheranham said there has been a subsequent learning curve; the store’s size puts it in more direct competition with larger corporate stores.

“We show up more on their radar than we do with our smaller stores,” he said.

The new store features a tasting room, where customers can have a beer or glass of wine and watch TV. Copheranham said the tasting room is a first for the Amarillo grocery market.

Fiesta Foods also operates a smaller store in Amarillo and a location in Pampa.

John Osborne, president and CEO of the Lubbock Economic Development Alliance, said excitement is building in anticipation of H-E-B’s planned opening of its first store in Lubbock later this year (see renderings below).

Lubbock, with nearly 320,000 people in its MSA, is the 11th largest city in Texas. Local economic developers anticipate the city will continue to grow at a rate of 7 percent through 2022.

The city has garnered an array of accolades over the past several years, including being named among the Top 10 Mid-Sized Cities for Economic Growth Potential by Business Facilities, a national economic development trade publication. That kind of growth makes the city attractive to retailers, including grocers.

“We have had a significant increase in population over the last decade, including people who have lived in other places in Texas who know about H-E-B and have shopped there,” Osborne said. “People in the region come to Lubbock for a variety of reasons, including grocery shopping.”

H-E-B broke ground on the more than 120,000-s.f. store in November and anticipates opening the long-anticipated supermarket late this year. Osborne, who has led Lubbock’s primary economic development agency for the past decade, speculates H-E-B may eventually build other stores in the area.

“I do know that it’s pretty darn hard to have just one store here,” Osborne said. “I believe their nearest store is in Midland, which is a couple of hours away. We don’t anticipate that it will be the only store here because the region is too hard to serve with one store. I would think that this will be their initial investment and they will have at least a few stores here.”

Some 235 miles to the southwest of Lubbock lies Pecos, Texas, a city of about 10,000 that straddles Interstate 20. That’s where Lubbock-headquartered United Family plans construction of a new grocery store, pharmacy, convenience store and fuel station. The chain, a subsidiary of Albertsons Cos., planned a Jan. 31 groundbreaking, with an opening expected late this year.

Ken Winkles said the new supermarket is the “greatest thing that has happened in Pecos” in the last 20 years. Winkles, executive director of the Pecos Economic Development Corp., is a qualified observer, having lived in Pecos for the past 47 years. The town of 13,000, which has experienced tremendous growth the past several years due to the oil and gas boom, has had just one grocery store for the past 20 years.

“When United announced the store on June 12 of last year, there was a tremendous response in the community and still is,” Winkles said. “We started working with United, trying to court them in the fall of 2017. Fortunately, they found the location, but it took a while to get it through the channels of Albertsons.”

Winkles said the Pecos economy is booming due to the oil and gas sector. Pecos is in the Delaware Basin, a section of the Permian Basin, a major production area for oil and gas.

“This is a game-changer,” Winkles said of the United store. “For a small town with one grocery store, this gives us a choice.”

The main store, a United Supermarket of 44,000 s.f., will include: a full-service bakery, sushi bar and full-service deli, in addition to a meat market with an in-house butcher for custom meat cutting. An extensive beer and wine selection also will be available. The development will include a 3,000-s.f. United Express convenience store and a fuel station with 12 fueling positions.

Pecos’ current grocery store is La Tienda. Winkles said he has nothing against La Tienda, but has always believed competition is healthy.

Sidney Hopper, president of The United Family, said the move into the booming Pecos market makes sense, and is a natural progression from the company’s successful e-commerce business in Pecos.

“The foodservice and dining room will provide another place for people to gather,” Hopper said.

“We like being a gathering place for the community, and we invest in the organizations that knit the community together. Pecos has been very welcoming, and we pledge to do our part in building up the community alongside our guests,” he added.

In Abilene, discount grocer Aldi is building a 26,000- s.f. store within an existing Kohl’s department store. The store, expected to open by late summer, is part of Aldi’s real estate strategy to position itself in high-traffic areas.

“Through a mutual real estate arrangement, we’ve secured a handful of Aldi locations adjacent to existing Kohl’s stores,” said Scott Huska, Aldi’s Denton Division VP. “Aldi and Kohl’s will operate independently and have separate entrances and no shared space. This arrangement allows us to bring more Aldi stores to the convenient locations our shoppers desire.”